Religion has been around since the dawn of time. A religion is a group of people who have the same beliefs in most cases. There are tidal waves of choices to choose from when it comes to inheriting a particular belief or passion. There is plenty of variety when it comes to what you may feel you want to worship. Some choose to worship snakes. Others prefer something a little less scary such as themselves or money. Team Wiseman chose to worship Christ. The first issue that arose after accepting Christ into our life was what religious group should we join? Christians currently hold the status of having more branch off religions than any other faith. You can be anything from Baptist to Catholic to Jehovah all in the name of Jesus, and the "branch offs" even have branch offs of their own! (ex.Southern Baptist is a branch off from Baptist) They all claim to be Christian based and have the athourity of Jesus to back them up. The problem with this is each group usually has their own set of "extra" rules and regulations, and if not abided by, then your out! Your kicked to the curb and feeling quite bad about yourself. We know because we remember how it felt to us. You feel that God himself kicked you out and when you feel that way, Satan claims victory.

If you have ever been kicked out of a church, we beg you to not blame God. That is not His ways, it is the ways of religion and Jesus hates religion! The author and creator of religion is no doubt the same author of separation and confusion, Satan himself. You see, Satan had to think fast when Jesus rose, Christianity was born. All of Satans future plans had to be revised immediately. He just lost a lot of souls because Christ paid our fine. Satan now had been stripped of his power over mankinds eternity. Now, all human kind had to do was reveal the the fact that they believe that Jesus rose from the dead for them and trust and rely upon Him for Salvation. What better way than to launch his attack on the earliest leaders of the church than by enticing their pride thus creating the desire to sub contract the Word of God to suit their own criteria.

This is the same spirit of pride that threatens the church leaders to this day. Real authentic leaders of God continuously have to humble themselves and you would never catch them pointing their finger towards the exit door. Jesus knew the plan of Satan was to divide the church and dilute its purpose and strength. This is why He prayed for the Church to unite and become as ONE.(John 17:20-26) Since our Saviour prayed for this, then I know without a doubt it will come to pass, but until then, we continue to see weak and self-indulged churches on the rise.

What bugs us more than anything else on this topic is "holy rollers" and "better than thou's". I'm sure a lot of you would agree with that. They mascarade around with their noses in the air like our sin stinks worse than theirs! Jesus gave major "Woes" to these type of people. He tells them they are the ones who shut up the Kingdom of Heaven against mankind. They keep us from God instead of bringing us closer to Him.(Matthew 23;13-33) In other words, these "leaders" are causing people to fall further away from Jesus while attending church services regularly. Jesus tells them exactly how he feels about them in the verses above. We would like you to put yourself in Jesus' sandals for a second if you would. He didn't go through what He went through for a religion. He was whipped repeatedly,stoned heavily, spit on,had his skull thorned, and was hung on a cross by hands and feet literally nailed to it. Sounds to me like He may have been looking for relationship rather than a religion. Sounds like He's looking for Love. He's looking for you.

Have you ever been given the old "heave-ho" from a church?

Are All Churches Bad?

Yes!...No, we're just playing. For real though, church establishments can mislead ones life in the wrong direction. We have heard so many stories how someone has been done wrong by a church. This makes them react negatively to trying to walk on the right path in life. They steer clear from the gluttonous, gossip-filled buildings we call "churches" and eventually close their ears to God. There are good churches but are far too few. Whether the church is a good one or bad, this seems to not matter much to a Believer who engages in a personal relationship with Jesus Christ. If anything else, the relationalist believer improves the Godly quality of a gathering facility. So by having a true, personal relationship with Christ, a lot of the drama of looking for the right place to worship or religion fades away. To have a relationship with Jesus is to obviously show a connection to Him. Wake up each morning and tell Him thanks for everything, and you Love Him. It's that easy, no candles to burn and no snakes to handle. Just those three affectionate words are all He wants from us in return for His Love. The burden He has us to carry is truly that light. 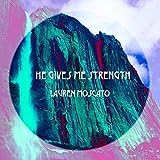 He Gives Me Strength
Buy Now

More articles from Team Wiseman and our Fellow Hubbers

Before His death on the cross, Jesus said..."Into Your hands, Father, I commit My Spirit."

To hear another mans last words, click on Team Wiseman.