Love and respect - the secret of marriage guidance

Nearly half of British marriages are likely to end in divorce, according to the bleak picture painted by a new statistical study.

The Office for National Statistics (ONS) found 45% of marriages will end in divorce before a couple's 50th anniversary if 2005 rates continue, with almost half of these splits occurring before couples reach 10 years of marriage.

So this is normal now?

My parents were together 66 years, literally until death did them part.

They had an imperfect marriage, but it was entered into by a different set of rules than apply today, when they got married, it was always in church, it was always 'for ever' and it was always a binding contract between two people in the eyes of God.

Both my wife and myself had relationship problems, with past partners and with each other, until we met and married in the same manner as my parents did in 1940.

We chose to accept a whole different set of parameters than is now 'modern' in our society.

I had been a serial adulterer, she had been a serial 'dumper' - statistically we were a doomed relationship waiting to happen, but the difference in our lives was that God ruled them, albeit less then than He does today, but He still wrote the rule book and we still tried to follow it.

But what if you don't want to marry in Gods eyes?

Well, I would consider you foolish, but fully understand, because most folk have bad memories of their local churches, and many churches are frankly atrocious examples of what a church should NOT be.

Fortunately God was aware of this problem, so He gave some really nice folks a whole ministry devoted to teaching people how to survive marriage as a couple, and the neat thing is, it will work whether you are a Christian or not.... 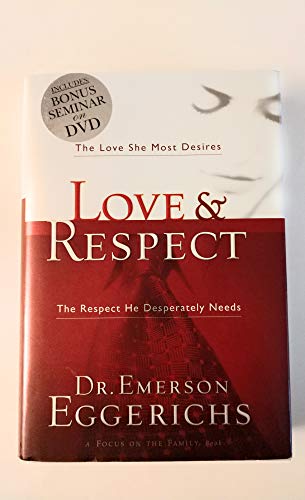 Love & Respect with Bonus Seminar DVD: The Love She Most Desires; The Respect He Desperately Needs
Buy Now

So who am I to talk to you about marriage?

I must be a happily married man of many years with a wife and children who all attend church on Sunday and sit on my board of elders - right?

I mean surely if you can teach others you must know how to do it yourself huh?

Totally wrong, I'm 58 years old and have been divorced and remarried, now that alone would disqualify me from ANY ministry position according to the bible, and how many Christians understand it, even me!

I became sexually active at 16 (it was 1967 after all) and started my first long term relationship when I was 18 years old, which lasted until I was 35.

Since I left my mum's loving care I have been in the company of women for ALL of the last 40 years except for two, which I will explain later.

I have been 'involved' with many women over that period, and had long term relationships during the whole time; spent with four women.

So I know what failing in relationships is about, and since I found Love & Respect, I also know the secret of how to make a marriage work.

Applying it is another matter of course!

Must men be cheaters and will they ever stop?

Not necessarily, I was a serial cheater for the first seven years of my first long term relationship, we stayed together 16 years and I was faithful for the last nine, then she left me for a friend... go figure!

Losing a loved one, either to death or divorce, which are much the same in the eye of the beholder, causes enormous stress and disruption in the life of the one 'left behind' and can result in erratic behaviour.

I hired a bright red open top sports car (on our joint credit card) and targeted her best friends for seduction, bought new 'image' clothes and looked up a woman I had met on a film shoot about three years earlier, when I had told her that I was 13 years into a 360 year relationship, so could I pass on her offer.

When I was dumped, I called her again and invited her to go on a holiday to see if we still liked each other. We went to the Seycheles, also on my ex's and mine joint Amex card.

People do strange and erratic thing when they are hurting and confused. I regret those stupid actions now (and paid dearly for them later) but we do stupid things when we are weakened and brought down by desertion.

My next long term relationship lasted seven years and I was a cheater again, but not once I had gotten over the anger and confusion of being dumped. It was a classic 'rebound' marriage and it should have just stopped once we both returned to normality,and before we wed, in the event we had a son and she went off sex 100%... it happens! - she recommended I found a mistress (not uncommon in Spain) and I found one who I was with for another seven years.

Oddly I was not a cheater with the mistress.

When I came to faith, I explained that we could no longer fornicate, and her answer was to follow me into the church professing a new found belief, so I had a strange time for quite a while.

I could not deny her the right to attend church, on the other hand we were sinning all the time, not uncommon in churches, unfortunately, but not what I wanted to happen, trouble was I had a high lust factor and a low level of self control! - a bad combination.

Eventually God said, 'I want you to go celibate, can you do that?' - now that I KNOW was not my imagination, 'cos I'd never even try to imagine those words, so I said "Can I think about that..."

Next day we spoke again and I said, "look Lord, I KNOW I cannot be celibate", and He said, "I know that too, but if you will give me permission, I can MAKE you celibate! - But will you give me the authority."

So often we refuse to give God the authority, so He cannot act in our lives. Selah

I did give Him the authority and sat back and waited, now I did not incur a sexual neutering immediately, and had some problems explaining my new status to my 'ex' mistress, indeed she was my 'thorn in my side' that Paul speaks of, but it did happen, and I did live as a celibate for about two years.

It was fine, I finally spent time alone, without female company, without sexual pressure and without lust in my life. I missed tactile contact, because although we hug lots in churches, it wasn't tactile in the way I remembered!.

My rebound wife had left me when I came to Christ, and looking back I was so 'heavy' in my confession (ain't no prude like a reformed whore) that she was justified to leave, and fortunately she left our son with me.

So I lived an independent life and realised that I had the ideal opportunity to be the father to my son that I had wanted for myself. The mistress gave up trying to get me when I finally met my wife, and when she (the mistress) saw how we reacted to each other, she just walked away.

My wife and I stayed separate for over a year before we married.

It had to be a marriage clearly approved of by God, we both had skeletons to be cleared from cupboards and we both had damage to repair. I was petrified of starting a physical relationship again, and not so sure I wanted to surrender my newly independent lifestyle.

Now we have been married 12 years and have an eight year old daughter.

We certainly are not sitting in the perfect marriage, but we do know how to keep it working and improving and heading in the right direction.

When two people both have Christ as their first love, then as they move closer to Christ, they also move nearer to each other, and it works.

Now lets expand on that statement a mite more....

So again I say, each man must love his wife as he loves himself, and the wife must respect her husband.

The basic teaching that will change your marriage for ever, it that women need to know they are loved, and men need to feel that their wives respect them.

Now there are many wives who do not respect their husbands and show it clearly in words actions and deed, and equally there are many men who simply never show that they love their wives, once the marriage has taken place.

Unfortunately most marriages are conceived in lust not love.

Multiple partners confuses our sexuality, and we start performing rather than responding (well men do anyway) and as we allow lust to rule our trousers, we lose that 'loving feeling' and women start to lose any respect they had for us, and the whole thing becomes a battleground.

Where nobody wins, except maybe your ex if you were rich enough.

God considers marriage to be the promise confirmed by the consummation, so if you 'got together' with one another with the implied or understood perception that this was more than random sex..... you are married in Gods eyes to that person, and every other 'that person' that you got involved with.

In Gods book (literally) He states that we either 'knew' the woman, or we 'lay' with the woman.

We never 'know' each other when we are in the heady heights of sexual anticipation, we know we want them, at that moment, but knowing someone takes time, and when the veneer of passion wears thin, and we are facing the reality of what 'they' are actually like, love can slip out of the door and respect can be destroyed.

Take a look at the Love & Respect program, preferable before you marry, but certainly if you are married and wondering why.

Gods intention was that you would find your perfect partner and become one with them in His image.

We have assisted Satan in almost destroying that ideal, and we need to stop, me too.