According to Hindu mythology, Ketu is generally referred to as a "shadow" planet. Ketu is the descending lunar node. The story of Rahu and Ketu is quite interesting. Swarbhanu, the son born to the Asura King Viprasithi and a Queen Sinhika, consumed amrut by disguising himself as a God and sitting in between Sun and Moon. Once Mohini (a Lord Vishnu avatar as female) who was distributing the holy nectar of immortality noticed the mistake Sharbhanu was assaulted with the ladle resulting which his head separating from the rest of the body. As he had already consumed amrut he did not die. Swarbhanu pleaded to Vishnu for moksha and accordingly a serpents body was fitted to his face which we call Rahu and the serpents head with his body became Ketu. Venus and Rahu are its friends, whereas Moon and Mars are its enemies. Ketu also causes lunar eclipse when Moon, earth and sun aligns in the same longitude along with the node. Though it is not a Planet it is counted as one of the Navagrahas. The effects of Ketu are somewhat similar to that of Mars. 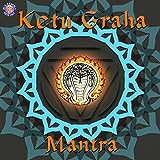 Mantras of Ketu and Meaning

Given below are the Mantras of Ketu.

I offer my obeisance to the violent and fearsome Ketu who is endowed with the potency of Lord Shiva and having a complexion resembling the flower of a palasa plant, he serves as the head of the stars and planets.

According to Vedic astrology Ketu is the representation of karmic collections both good and bad, spirituality and supernatural influences. Ketu is the lord of three nakshatras :Ashwini, Magha and Mula. Ketu stays for 18 months or 1.6 year in each Zodiac. The metal representing Ketu is Iron and Gemstone is Cat's Eye.

Some Remedies of Ketu