'Maradonismo' and The 'Church of Maradona'

Diego Armando Maradona, born on 30th October 1960, is regarded as the soccer God and is also a living legend of the football game. However, this hub is not about the gaming skills or achievements of the football God, but about a religion called 'Maradonismo'.It is a known fact that the media and fans often hail Diego as the 'God of Football'. But, aren't you amazed when you hear that few fanatic followers have gone a step ahead and formed a church in his name. Even I was surprised when I came across this piece of information. Then I started to dig blogs, webs and books to do a research about this religion and collect as much as information as possible. Thanks to Diego's recent visit to Kerala which has triggered my quest to know more about his hardcore fans and followers. So let me share some interesting facts that I have come across during my research about 'The Church of Maradona'.

'Maradonismo' or 'The Church of Maradona' was found on 30th October 1998 (Maradonas 38th birthday) by his fanatic followers in Rosario, a port city to the north of Buenos Aires. The founder Marcela Amez claims that the church has more than a million followers, however he has also cautioned the followers that it is not a real church but a 'Football Church'. The church celebrates Diego's Birthday as their Christmas and count the years since his birth in 1960. Interestingly, their calender is known as 'DD' or 'AD' ("Despues," or "After" Diego). Every 'Christmas', a congregation of the devoted followers gather at the 'Hand of God' Chapel and pay due respect to their living God. The Christmas tree's are decorated with his images. On this day the devotees carry a football crowned with thorns and a 'Goalary' to the church. Baptisms also take place on this day by slamming a football with the hand. This is to pay homage to the 'in'famous 'Hand of God' goal scored by Diego against England in the 1986 World Cup.

This is not all, 'The Maradonian Church' is also rich in religious lore. They consider his autobiography 'El Diego' as their Bible and those who have helped him in his career are regarded as apostles. The people who stood against Diego during his lows are considered as 'heretics' of the religion. The believers even have a 'Ten Commandments' which they follow religiously. This also includes a commandment to name their son's as 'Diego'. Much to the delight of the devotees, Diego himself once said that he is touched by the Birthday celebrations at the 'Hand of God' Chapel.

However, Many Argentinians have not responded positively to concept of Diego as a God and establishing a parody religion in his name. They feel that the drug problems of his life has over shadowed his career and to some extent they feel uncomfortable in regarding him as a national symbol or even as God for that matter. While the followers firmly believe that Diego has given so much to the country and they find pride in regarding him as a National symbol. They believe that every Argentinian should pay back Diego for bringing the world cup glory and moreover for devastating England in the quarter final match of 1986. Not so surprisingly, majority of the English still consider him as a cheat, as reported by The Telegraph.

"Goalary", is an over sized rosary, with 34 beads – depicting the number of goals Maradona scored for Argentina.

Our Diego, who is on the pitches,
Hallowed be thy left hand, bring us your magic. Make your goals remembered on earth as in heaven,
Give us some magic every day, forgive the English, as we have forgiven the Napolitan Mafia,
Don't let yourself get caught offside and free us from Havelange and Pele.
Diego

The Ten commandments of Maradonians 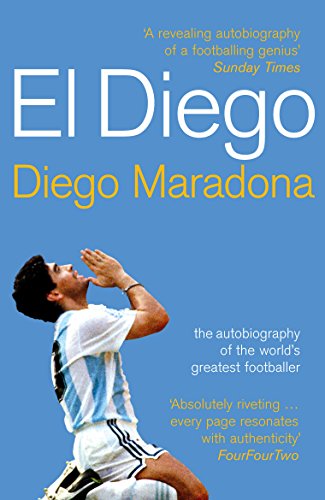