Miriam -- Leader of the Women

A Leader for Her People

Miriam started off life working for the women of Israel as a midwife. She helped get her parents back together by reminding her father that Pharaoh had decreed on the boys and he was "decreeing" on the girls too (her father, Amram, had separated from her mother, Yocheved, because Pharaoh had decreed that all boys born to the Children of Israel would be put to death by being thrown into the Nile River).

Miriam was watching her brother Moshe (Moses) when their mother put him in a basket in the Nile River. Miriam noticed that the daughter of Pharaoh (called Batya or Bitya by commentaries) when she found Moshe and Miriam jumped up and told Batya that she knew a good wet nurse and Batya agreed to use Yocheved as a wet nurse for Moshe.

Miriam's role in the community grew as she did. When her brother Moshe was leader of the people, she was a spiritual "Mother" to her people. When the Children of Israel were freed from slavery in Egypt, the Egyptians followed them to the Yam Suf (generally translated as the Red Sea) and the Sea opened up for the Children of Israel to pass through but then came down on the Egyptians.

After the men sang in thanks to G-d for their redemption and for saving them from death at the hands of the Egyptians, Miriam took the women and they sang and danced, praising and thanking G-d.

During the time that the Israelites were in the desert for 40 years, they had a well and that was on Miriam's merit. When Miriam died, the well disappeared.

Miriam was a shining light to the people and an example to the women of a strong woman, one who was a leader in a time when female leaders were few. She stands to us, 3000+ years later, as a image of what being a woman means.

Miriam Themed Merchandise from Amazon - Vote for your favorites! 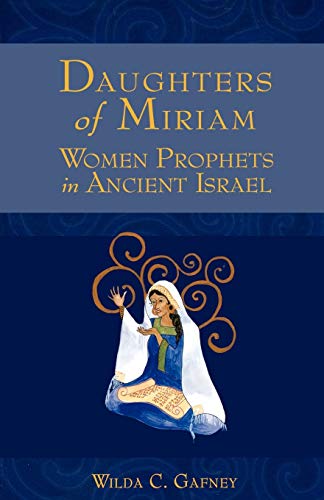 Daughters of Miriam: Women Prophets in Ancient Israel
There are untold numbers of female prophets hiding in the masculine grammar and androcentric focus of the Hebrew scriptures. There are women-prophets in the communities around biblical Israel, existing for hundreds of years and even a thousand years before the Israelite and Judean prophets recorded their messages. The rabbinic and Christian fathers analyzed and found more women in the scriptures who function as prophets than the biblical authors identify. All of these female prophets have an int...
Buy Now

Five Books Of Miriam: A Woman's Commentary on the Torah
Weaving together Jewish lore, the voices of Jewish foremothers, Yiddish fable, midrash and stories of her own imagining, Ellen Frankel has created in this book a breathtakingly vivid exploration into what the Torah means to women.Here are Miriam, Esther, Dinah, Lilith and many other women of the Torah in dialogue with Jewish daughters, mothers and grandmothers, past and present. Together these voices examine and debate every aspect of a Jewish woman's life -- work, sex, marriage, her connection...
Buy Now

Miriam's Cup, a Passover Story(Scholastic Bookshelf)
It's Passover at the Pinsky home. Before the seder, Mama tells a very important story to Elijah and Miriam-- how the Jewish people were led out of Egypt by Moses. But this year, Mama includes another part to the story: the part about Miriam, Moses's sister. It was Miriam who watched over her baby brother in the bulrushes, who led the women in song when crossing the Red Sea, and who kept the Israelites alive in the desert with water from her miraculous well. This beautifully illustrated, deeply s...
Buy Now

This cutting board is only one of several Judaica themed items at our store:

In addition to Cafe Press, Zazzle and Printfection (see modules above), compugraphd also has a Shop-it site.

I just discovered Printpop -- check out my entire portfolio or click on the graphic to see just this product (called "Jewish Star - Menora"). Check back periodically as new designs are uploaded.