Smurfs Misbehave ALL THE TIME, Apparently...

Now, don't get upset about the content of some of these little mini-tales and mini-urban legends about toys. More importantly, don't get upset about the fact that I will name a couple of church organizations here. I'm getting these little blurbs from valid google searches that have led me straight to church group forums and these are jokes, little mini-stories that church members are telling amongst themselves!

Yes, there are enough funnies and not-so-funnies to fill a whole hub...if you'd like to try your hand at some searches, in fact, there are more than enough funny and not-meant-to-be-funny stories about strange people and bad toys - TO FILL UP MANY FORUMS!

I had NO IDEA that Smurfs misbehave so much!!!

Here's how Smurfs are misbehaving:

#1 Smurf tale I'm seeing everywhere online: a new (JW) family had just started studying and showed up to attend a Saturday meeting. Their young son had brought in a stuffed smurf toy huddled in the crook of his arm. Eventually, the boy set his toy down and about half-way through this meeting...

...suddenly, the Smurf stood up, loudly declared, "I have had enough of this sh&t !!" and promptly walked out of the meeting of its own accord...

Other versions of this little mini-tale or mini-joke (some JWs are NOT joking when they tell this story - but some are) are basically the same. Only the family size might differ in the story. Occasionally the kind of toy differs in other versions...but it's usually a stuffed toy of some sort.

#2. Smurftale: a teenaged girl has a pared down, smaller smurf toy in her purse when she accompanies her family to the Saturday meeting. As everyone is singing the opening song to begin the meeting, the smurftoy jumps out of the teen's purse, trots quickly down the aisle toward the door, repeating, "I can't take this sh&t, I can't take this Sh&t, I really can't take this sh&t" the whole time and - exits the building.

The above two little smurftales are common and probably every JW has heard and told these, as far as I can tell from the popularity of these tales on several large religion forums I was led to by google search results.

There are also the tales below - short, sweet, and questionable but apparently, very popular:

A babysitter was asked to babysit for a JW family. When she went to the family's home to babysit, she brought the 2 children a couple of smurf toys. When the parents returned home, the smurfs were dancing on the bed and a short distance away, a newpaper was levitated, floating in the air!

Now, actually, I want to just post/copy and paste an exact blurb I just found on a forum:

From a member of the JW Forum .net

"Does anyone have any Dub urban legend stories?

I remember a story running rampant when I was in my pre-teenage years that went a little something like this:

Word on the street was that a young child went to the circuit assembly with his parents. The child brought a little stuffed toy with him. However, this wasn't just any cute cuddly stuffed toy. This was one of those little blue demons that worldy people call Smurfs. Anyway, the stuffed little Smurf, got up in the middle of the assembly and walked out the door. Apparently the demon inside the stuffed toy could no longer take the "light" and "truth" inside the assembly hall and had to get out with the quickness."

There are tons and tons of the smurftale in barely-altered versions and I found these in a thread of a JW form called "Actually Hilarious JW Urban Legends." 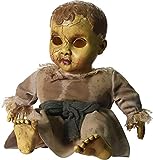 So much has been written online about the Robert Doll that, here, I'm just going to keep things brief here and link out to some of the Robert Doll information links that I'm aware of and that contain good information. ie: there's even a website called "Robert The Doll" with an "org" extension and it's been up for several years. Robert evan has his own blogspot blog - linked off the org site. Visitors who go to see Robert at the Museum where he currently resides often write in and comment on Robert's blog, asking Robert's pardon for their not believing in him until seeing him at the museum...People also post to Roberts blog, asking such things as, "Have you ever met a Poltergeist?" and "What is your favourite food" (I know the answer to the second question - will post it as one of the POLL QUESTION/SELECTIONS on this hub)...

Robert the Doll is roughly 105-106 years old (as of 2010 and the time of this writing) and people have been taking this doll seriously for well over 50 years.

The Otto family in Key West Florida acquired a certain doll from a servant in 1904. Actually, the doll was given specifically to the only child, Robert Eugene Otto, and R.E. Otto named the doll "Robert," the same as his first name...

If that's not queer enough...

Friends, neighbors and family say that Eugene talked to his toy doll long past the age that most kids are giving up their imaginary friends, childhood dollhouses, dolls, figurines, and other toys... and sometimes - neighbors even saw Robert the doll sitting at the upstairs windows, looking out - when Robert Eugene wasn't even at home!

In the early 1970s, after Eugene Otto died, the next family to hang on to the doll experienced strange things with the doll and the Robert Doll was donated to a Museum in Key West.

Robert the Doll still does reside at the Museum but night staff and early morning day staff say that Rober doesn't stay put once the final staff member locks up the place for the night. Often, when Robert has been particularly active and getting on the staff's nerves, they try to settle Robert down by placing Mints near to where he is set in the museum. Staff have reported that, in the morning, there are mint candy wrappers around the place with the mints gone from their wrappers... Robert the Doll is believed to be the one who is eating the candy.

A Visit To See Robert The Doll

Jehovah's Witness members are one of a certain kind of Christian group who believe in door to door 'witnessing' or discourse with people - to spread the word about their beliefs and offer non-JW people an opportunity to learn about God and JW viewpoints.

So naturally, those who identify as JW have several versions of urban legend related to experiences concerning door to door encounters with people. I've found these mini-legends very interesting in that they are generally very dark. They may attest to the presence of fears in JW members who sometimes aren't really comfortable going door to door. This seems reasonable to me when I think of all the strangers JW people must encounter in their door to door journeys...

Here are the stories:

A sister who was, for some reason, working by herself [doing door-to-door witnessing] knocked on one door and unknown to her, it was the home of a serial killer. She talked with some time to this man and ended up leaving some literature for him and then she walked away, intending to continue on her way to go to the next nearby house...

...as she neared the next house, a police car pulled up in front of the house she'd just visited. Within a few minutes, the policemen had the man in the police car. One the way to the jailhouse, one of the officers asked the man, "Why didn't you attack the woman who just came to your door?"

The man replied, sort of incredulous that the cop would ask such a question "well, obviously...because she wasn't alone...there were those two men on either side of her, so I left her alone."

Here's an odd one - a little disturbing:

A brother was out in service and knocked on the door to someone's home. A guy opened the door and he was wearing a black hood and cape. The brother mentioned that he was one of Jehovah's Witnesses...in reply, the creepy guy said, "Oh, Jehovah, I know him, why don't you come in?!!"

The brother took one step back, just to make sure he'd heard right. And as he examined the man, to see if he was serious...