Missionary work is the bedrock of Rodric's Faith. Read about these stories of faith and hope while in the service of God.

Mthatha is a small city in the Eastern Cape of South Africa. It is not a tourist attraction or a place of retreat--unless you like Normal and want to retreat to Normal. The mixture of rich and poor are average for the nation, and the city's culture is predominantly Xhosa-speaking people with a heavy European influence. Europeans established Umtata, now Mthatha in1869. 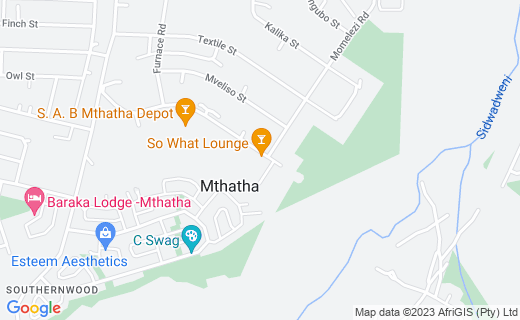 Sloping Sakwe [pronounced sock - way] Street contained a row of houses and the missionaries lived in one. It was to be my home for the next several months and our base of ecclesiastical operations. It was unpainted, which made it stand out, but it fit perfectly in the well-off dwellings of the neighborhood. I stepped over the threshold into the new boarding, barely sitting my belongings down, when in popped a local member of the Umtata (Mthatha) Branch to pay a visit. I was excited!

It was the first time I met a member of the Church who was not a missionary but I did not know that at first. Andile, the member, would be my first contact with a lay member of The Church of Jesus Christ of Latter-day Saints. The Umtata Branch was the name of the local congregation of the Church in 1999. It was the only congregation of the Church in Mthatha at that time, and it had very few members. Our "area" in Mthatha was a geographical area assigned to missionaries by the Mission President of the South Africa Cape Town Mission

I did not know how Andile looked or what was his age, but I was informed that he was a bit eccentric before he popped his head and body into our boarding.

Andile's unique brand of introduction began with fellow missionary, Elder Zithulele Danisa from Durban and me being pranked. Elder Danisa himself was a unique story, but suffice it to say, he came from a hard life and had left that life to join the Church and serve a mission within a year of so doing.

In stumbled a beggar, a.k.a Andile, requesting funds for food. We had been in town long enough to know that such things happened in South Africa, but it took me by surprise regardless. Andile, with the participation of our missionary companions Elders Thompson and Streadbeck, portrayed a drunken idiot seeking food and money as many beggars did around that area.

"Two Rand for Chips Boss," Andile repeated as he staggered around the living room of the boarding. I ignored him. I figured he was a member. I already knew about the "greenie" jokes. Greenie jokes were what the old fashion missionaries played on new missionaries to welcome them into the mission field or proselyting area. I am told they don't do that anymore. I doubt it since there are mostly 18 to 21-year-olds on mission.

Andile was quite believable in his portrayal of an inebriated Xhosa man. Insomuch that when he went to "take" Elder Streadbeck's personal items Elder Danisa became charged.

"No, no no! You cannot take that," shouted Elder Danisa. "Put it back. You don't want fish and chips."

I wanted to proclaim to Elder Danisa that the person was just a member, and it was probably a joke, but I honestly was not sure. I suppose when I did not react to the performance Andile kept it up for Elder Danisa's benefit.

Elder Thompson was red with suppressed laughter. I shook my head as Andile continued to act--Academy Award style.

The staggering and begging would have convinced anyone unfamiliar with missionary pranks like Elder Danisa. I knew it was bogus; however, Elder Danisa's quick temper would not contain itself. Just as he was about to kick the stuffing out of Andile, Elder Streadbeck alerted Elder Danisa Andile pranked him. We all had a decent laugh at the successful pranking of Elder Danisa. I thought it was over. After laughs and conversation, Andile addressed me severely serious.

"Elder Johnson," he began, "I have something to tell you." By this time my guard was down and I suspected no jesting. "In our tribe, we have a prophecy about the Black person who would cross the oceans and become the anointed one of our people."

"What," I said confused. Andile's visage appeared gravely serious, enough to scare the tar out of anyone--and by anyone, I mean me!

"Elder Johnson, you have fulfilled my people’s prophecy. I must tell my father; and with him, we will come tonight and take you to your new home."

An eerie feeling came over me. disturbed. I said lightly, "You are joking, right?" I looked at Elder Thompson and continued. “Is this guy for real?"

"Hey, this is news to me," said Elder Thompson excusing himself to laugh about the situation, I thought.

Andile continued to become more detailed about my uniqueness and my particular status. He flattered me, plain and true. His flattery frightened me with his worshipful devotion to my supposed status without flinching once. His beautiful accent reminded me an English poet. Words flowed off of his tongue like water from a fresh spring. By the time he finished, he had everyone in the boarding spellbound.

After about 20 minutes of the beautiful accent of the convincing words of this Xhosa member, I successfully helped Andile think I did not believe him. Truthfully, I did believe his story. I put on the performance of my life trying not to appear affected by Andile's words. Never once did he indicate what he said was false or that he had invented the tale.

When he left, Andile, this 17-year-old kid, I, a 22-year-old elder expressed my mind to Elder Thompson about this story of me being the choosen. Honestly, he did not know that Andile planned the story or if it was true. That really scared me because I was the first Black American the Church sent to Umtata as a missionary to my knowledge. Elder Thompson knew enough about Andile that he could not conger up a tale like that on a whim--in his opinion at least.

Can you imagine the night I had?

Every sound killed me slowly. It was my first night in the area. All of my misconceptions about Africa were still vividly floating in my consciousness, though logic told me otherwise. My prejudice and misunderstanding of local culture and customs caused my heart and mind to imagine scenarios that would occur if I closed my eyes in this new place.

I thought incessantly of Xhosa warriors waiting until my companion goes to sleep before wisking me off to some tribal place to be made ruler. I didn't even think the Church allowed things like that to happen. I wondered why they sent me to a place where the natives would elect me their ruler! My fear displayed my arrogance and ignorance. If I had known that South Africa was just as normal as South Georgia, I would never have lost any sleep over Andile's story.

Elder Thompson finally did nothing to ease my mind. When I saw Andile at Church my first Sunday, I asked him about my so-called "Anointed One" status.

He did not remember!

So I rehearsed laughingly the whole story HE TOLD ME, trying to make like it did not cause sleep deprivation in me. Half a week had transpired, and each night I waited for this "taking" Andile spellbound us with to occurred.

"Yea" or "Nay," I wanted him to say whether it was true or not. I had to know, nevering knowing if someone would steal me away and do all types of tribal leader stuff that I knew would be awful.

Andiled regarded me with the most pathetic, empathetic eyes and said, "You really believed that? I was just messing with you elder."

"What do you mean I believed that? I wanted to hide. Lying while claiming to be a representative of Jesus Christ would not fit well talking with the lad. If I could sink into another dimension, I would have. "So it was a prank? I knew it!"

"You believed, didn't you?" Andile asked in beautiful Elizatheben English, to my consternation. I thought he was going to give me a pity hug--that I would have dodged!

From that point on, I became The One.

The one Andile played all his intellectual mind games with because I was so gullible, each time. Each time my acting became worse because I could not lie, and he convinced me me of several strange new things before revealing it was a prank.

Who knew a 17-year-old could be so talented at acting? I did not. He taught me what a prison my ignorance about Africa created for me emotionally. That day began the curing of my prejudices, the beginning.