New Book, Massacre At Mountain Meadows Soon To Be Released

In September 2008 a new book was released called, Massacre at Mountain Meadows. It is written by Ronald W. Walker, Richard E. Turley, and Glen M. Leonard. Before the book was released I had read in the newspaper of the gathering process that was taking place so the authors could write Massacre at Mountain Meadows . The authors had asked that anyone who had any information about the Mountain Meadow Massacre please contact them, so they could be very thorough in presenting all the facts. At the insistence of my aunt, I did contact them, and shared what personal information I had. Yes, I did have a personal interest in the massacre that occurred at Mountain Meadows and have been studying the subject for years. That was over five years ago. And now, the book is finally published and on the shelves. I guess it has been a long time coming. I am a Mormon, but that is not the only reason I am interested… I have a family member who I believe was there.

Massacre at Mountain Meadows
Coauthors Walker, Turley, and Leonard provide the fullest account yet of the darkest chapter in Mormon history: the massacre of a wagon train of California-bound immigrants passing through southern Utah in 1857. Readers relive the grim days when local Mormon leaders besieged the immigrants with a force of white militiamen and Paiute warriors and then brutally butchered all but a few young children. To account for the barbarism of attackers who professed a religion of love, Walker, Turley, and Leonard recount the Mormons turbulent history in Missouri and Illinois, where government officials allowed mobs to kill unarmed Mormons and drive others from their homes. Determined to protect their new communities, Utah Mormons seethed with passion when, in 1857, President Buchanan announced plans to send troops to quell a supposed Mormon insurrection. Those passions surged when some immigrants boasted of involvement in earlier depredations against Mormon settlements and threatened worse. The drama leading up to the massacre brings to view a score of memorable personalities. But the most famous namely, Brigham Young plays a role of surprising impotence, as his urgent letter directing the militia to let the immigrants pass in peace leaves a Mormon captain lamenting, too late, too late. An essential acquisition for any western history collection. --Bryce Christensen
Buy Now

The Mountain Meadows Massacre was something that bothered my great grandfather about the LDS Church.

Just before my great grandfather died he called my aunt and asked her to come over to his house to see him because he had something very important he wanted to tell her. It was something that had been bothering him for a long time.

A discussion ensued and he told my aunt a story that both shocked and intrigued her. My grandfather was not always a member of the Church of Jesus Christ of Latter Day Saints, he converted in his later years at the request of my great grandmother who, when she heard the story of Joseph Smith’s First Vision, was converted and joined the church. My great grandfather however did not follow in her conversion until several years later. He had something that had always bothered him about “the church” which he had a hard time reconciling.

That something was the Mountain Meadows Massacre.

Family Story of the Mountain Meadow Massacre as told by my great grandfather...

The family story is as follows:

My great grandfather had heard it from his father, who had heard it from his father. Now, I know what you might be thinking.. this cannot be a valid, accurate account, having been retold for so many generations , I thought the same thing myself, but upon further research I have found the story to have substance, and in fact, I believe it is true and valid. I guess you can call this my testimonial part!

More to the Mountain Meadows Story...

My great grandfather imploringly asked my aunt to find out the “truth behind why the Mormons killed his great aunt.” He, in fact, made my aunt promise to find out the reason why.

That last statement caught my attention.

My great grandfather had never even cracked the Bible, I was sure of that! There could have been no way he would have been aware of the counsel given to the apostles in the New Testament that talked about the performance of “shaking off the dust from your feet” when someone would not listen to their words.

Right away I realized that there had to be more to this story.

The story continued…His great aunt was just a young girl at the time of the Mountain Meadow Massacre. She had signed on to be a nanny for a family who was traveling to California in a wagon train bound for the west. That wagon train never reached its destination. His great aunt was never heard from again. They were convinced she was among the victims of the massacre at Mountain Meadows. 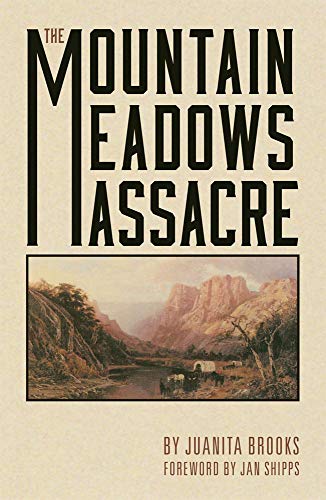 My aunt was then given a book from my great grandfather, which he had never read, called The Mountain Meadows Massacre by Juanita Brooks. Juanita Brooks was the most credibly published author on the Mountain Meadows Massacre at the time. My aunt, who is not a fan of reading, took the book and let it set on her shelf, haunted by the promise she had made to my great grandfather for years…

Enter unsuspecting niece… me…it was time to “pass the buck” or the “baton” whichever you prefer.

You guessed it, that assignment involved me reading the book by Juanita Brooks and figuring out just exactly what the Mountain Meadow Massacre was. Being a church history enthusiast I was up for the challenge and started right away. I soon learned that Juanita Brooks was a lone voice on the subject at the time. The Mountain Meadows Massacre was not a subject that was discussed openly amongst practicing Mormons. It was difficult to find information at all not to mention credible information.

Mormons are now talking about the Mountain Meadows Massacre

The Mountain Meadows Massacre has just recently become a topic of discussion, and a forum for healing among Mormons and family members of the victims alike.

Because of the wonderful inspired efforts of our dearly departed prophet,Gordon B. Hinckley, in his attempt to repair the hurt and sorrow brought about by this tragic event, the Mountain Meadows Massacre is openly discussed, and education on the subject is available to all, so that we can learn from the mistakes of the past.

A beautiful memorial has been created and is maintained by The Church of Jesus Christ of Latter Day Saints to pay tribute to those who suffered death and loss by the Mountain Meadow Massacre.

A wonderful article in the church publication called the Ensign was written exploring the circumstances and the events of the Mountain Meadows Massacre, which is fabulous if you are interested in learning more about the subject.

You must admit, I am in a very strange predicament, a member of the Mormon Church with an ancestor who was reportedly “killed by the Mormons.”

I say reportedly because her name appears nowhere in any of the documentation or company manifests, it does not appear on the beautiful monument, it only remains in the memory of my family by way of family history…some may call lore, I call love.

Although many will never know she was there, I Hortensia, know you were and will always remember you.

Understanding brings peace... I understand the climate, and events that led to the Mountain Meadow Massacre...

Do I hold bitter feelings about the Mountain Meadows Massacre? No way! I have had the incredible opportunity to study firsthand the history of the event. I have come to understand it better than I could have ever understood it without that charge I was given to research it.

And… simply because this HUB is becoming a “book” I will write a follow up one to explore the fascinating things I personally have learned about the Mountain Meadows Massacre… watch for more to come!