My son and I, caught the Apollo 13 matinee feature in the mid-nineties. The movie was as intense and heart stopping as the critics said it would be. I believe I was just about my son’s age when this manned flight to the moon took place in the month of April 1970. Here is one of those trying tales that gripped the hearts and imaginations of people the world over. Many stood in all-night vigils by their television sets for the latest broadcast, while others knelt in prayer as the reports continued to trickle in. What was to be a routine, by-the-book mission to the moon, became an adventure likened to a box of chocolates: NASA never knew what they were gonna get. Upon experiencing the fatal explosion of their oxygen tanks, which blew the outer panel of their service module, everything started to go downhill. The astronauts aboard the Apollo 13 immediately radioed Mission Control and reported, “Houston, we have a problem.”

During this moment of crisis, Gene Kranz, NASA’s Flight Director, didn’t want theoretical calculations or ballpark estimates. He demanded real answers to real problems. For everything that could go wrong was going wrong: an adequate supply of oxygen was lost, carbon dioxide poisoned the cabin air, icy temperatures were endured to conserve energy, navigational equipment was damaged beyond repair, a faulty heat shield and parachute system was questioned, and the threat of a typhoon loomed upon their entry back to earth. Time was of the essence, precious power was fast depleting, the spacecraft was severely crippled, and the astronauts had no choice but to tear up the Official Flight Plan and fly their sinking ship by the seat of their pants. Yes, the space program may have lost the moon, but they weren’t about to lose these men. Every back-up man and every back-up plan was forced out of the woodwork. And this, ironically, was to be NASA’s finest hour: the success of a failure.

From the Christian’s point of view, we lost Eden but God wasn’t about to lose the men and women trapped in a runaway planet called Earth. From being in Paradise to being paralyzed, we careened through space, without a prayer’s chance to return to God. We were doomed to destruction. From the fall of Adam and Eve to our present day failures, life on this planet has given us one hell of a ride. But God in His wisdom has given His spirit to the past heroes of the faith and those of today. Men and women who are willing, in their weakness, to navigate their lives in this wounded, wretched world and dare to fly in the face of failure. By faith, we threw out the human flight plan and trusted in the Divine plan of salvation. In the midst of the chaos and confusion, we take comfort in our Flight Director, Jesus Christ. He is the object of our faith, the anchor of our souls, and the eternal reference point who will guide us home. We consider Him who endured such hostility and overwhelming odds in our struggle against the deadly damage brought about by sin.

As we look to Jesus, “the pioneer and perfecter of our faith” (Heb 12:2), we do not grow weary or lose heart. In a world gone astray, Jesus’ presence in our lives is like a precious, life giving tank of oxygen in a vast and sinful space. Everything that could go wrong did go wrong. But through faith in Him, we continue to conquer kingdoms, administer justice, obtain promises, shut the mouths of lions, quench raging fires, escape the edge of the sword, win strength out of weakness, become mighty in war, put foreign armies to flight (Heb 11:33-34). Faithfulness, not success, means that you forge the ultimate frontier of faith; failure means you die to self in order to live this life of faith with the whole world watching beneath the great cloud of witnesses. Faith’s finest hour will be celebrated by the saints who, hopes against hope, together reach the final and common destination: heaven on earth. 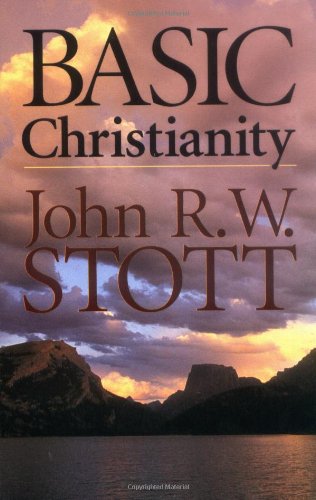 Basic Christianity
John R. W. Stott defends the fundamental claims of Christianity and defines the proper outworkings of these beliefs in the lives of believers. Here is a sound guide for those seeking an intellectually satisfying presentation of the Christian faith. Price: $1.25 List Price: $6.00
Buy Now