The man with birthname Alva John Kiehle, born on March 25, 1930 is none other than Fortean author and professional journalist John Alva Keel. A natural writer, Keel's work was published in a magician's magazine when Keel was a mere 12 years old.

American-born, Keel had his share of experiences in the US Army. He was drafted and served in Frankfurt, Germany on the staff of the Armed Forced Network, employed as press correspondent. Keel resigned from this position after several years in order to tour Egypt and the Middle East. In 1957, his story, Jadoo was published in a men's adventure magazine in serialized form. Jadoo is about Keel's experiences in India while investigating the phenomena of fakirs and holy men who survive being buried alive and who perform the ages old "Indian Rope Trick." 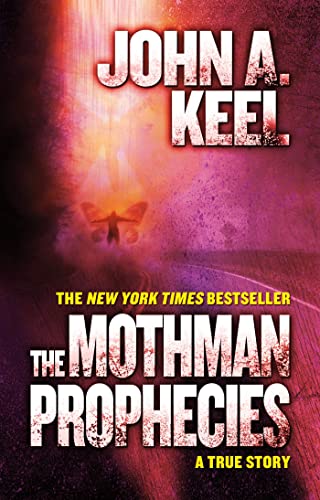 Clearly, Keel was influenced by the works of Charles Fort, and like Fort, Keel delved into the unexplained using both feet, with the rest of his body in hot pursuit.

Others who influenced Keel's thinking and writings were Ivan Sanderson (1911-1973) - a Scottish naturalist and writer on cryptozoological and paranormal topics - and Aime Michel (1919-1992) the French author, philosopher and UFO researcher.

During the 1960's Keel began researching UFO's and has admitted in interviews and in his writings that originally, he sort of hoped to validate "extraterrestrial visitation hypothesis" that were so prevalent in the 50's and 60's. After one year of intense investigations, reading and interviews, Keel drastically changed his opinion and viewpoints on the existing "E.T. Visitation hypothesis." His viewpoint ran more in the way of supposing that UFO sightings and experiences seem to be connected to psychic and psychological phenomena with a greater degree than most researchers were previously entertaining. Much of what Keel learned "in the field" through "field investigations" was that many UFOs may originate from our minds and via hallucinations and many might not be solid matter at all.

Keel's writings and work in the fields of paranormal and strange phenomena led him to suggest that many seemingly unrelated paranormal events, beings, and phenomena might actually be related and these 'anomalies' might be a cover for a larger phenomenon.

John Keel on the cover of Fate Magazine - later years

Ultimately, Keel explained that poltergeist phenomena, balls of light, ancient fairy faith tales, vampire legends, UFO sightings, mystery 'airships' as described by pre-1900 cultures, and related phenomena might be covers for an advanced Earth civilization that existed long before the Scriptures were penned - even before pictographs and heiroglyphics were carved out...

Obviously, those earliest beings we believe were our ancestors, carving into and writing pictures and symbols onto cave walls and other objects - were telling stories from older generations, as well. Keel suggests, from time to time in his works, that this more ancient civilization doesn't want us to know too much about its existence...so it allows us to be confused and make up unsatisfactory explanations about UFO's, airships, ghosts, strange creatures, etc.

What Keel is most famous for (in pop-culture): The Mothman Prophecies

From 1966-1967, Keel went on location to Point Pleasant, West Virginia USA, to do some studying and writing. Strangely enough, right around this time, the residents of Point Pleasant and nearby towns experienced a number of strange events and a scattering of weird and unexplainable phenomena. Keel was able to put his journalist skills into play immediately and interview many Point Pleasant and nearby residents as these strange occurrances were still pertinent events in their lives. In the mid 1970's Keel published "The Mothman Prophecies," the information from and his thoughts on his time spent in Point Pleasant between 1966 and 1967.

Sadly, John Alva Keel is no longer with us. As he aged, he became more reclusive, suffering with health problems and in the last few months of his life, also likely suffered with mental health issues or dementia (mentioned in Cryptomundo blog/site articles by those who respected and worked with Keel throughout the years).