Susan May Gudge has been studying and practicing the craft for over fifty years. The craft, Wicca, is not a religion—it is a lifestyle.

Although much has been learned about the human brain, there is still much that is not understood and may never be understood. The idea that only ten percent of the human brain is actually used is said by some to be fact and by others to be just an urban myth. Maybe it is only that what we use, some use better. Maybe some brains have more ability that others. Maybe we all have special skills of the mind that have not been trained or used. Maybe we have lost some abilities in our evolution or are gaining new abilities in our evolution. We could argue these points for an eternity. Regardless, some people seem to have the ability to do things that others cannot. Not much of the whys and wherefores in such fields have been fully understood or explained. Scientific studies have proven that some people do have such abilities; the ability to move objects, glimpses into the future through dreams or meditation, connections between twins or a mother and child. Such things can and do happen. One day we may understand how the brain actually works, all facets of it, but then again, it is possible that we may never fully understand how our minds actually work. 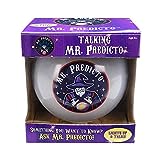 Mr. Predicto Fortune Telling Ball - Ask a YES or NO Question & He'll Magically light Up & Speak the Answer - Fun Way to Discover Your Destiny - Talking Fortune Teller Toy Like the Magic 8 Balls
I personally own two real crystal balls but this one is just for fun. It is a lot of laughs at parties or just to let people know there is a lighter side to predictions, meditation and magic.
Buy Now

The use of spells is a fine example of the power of the mind. For example, if a woman casts a love spell and truly believes in the power of that spell, her whole body language can change. She will move differently when the object, man, of her desire is around. Her eyes will glow and flutter when he is near. She becomes sexier, available. The man, without knowing the reasons, can react subconsciously to those signals and actually fall in love. So, yes, the spell worked. In some cases, a death spell has caused some to die, without any physical reason or injury. The victim has just given in and died, due solely to the belief he has been cursed. In many ways, spells use the subconscious mind to cause an event to happen. True belief, or faith, can work wonders.

Man first lived in caves and shelters. They, of course, did not have television, radio, computers or video games. Instead, they had story tellers. Grouped around fires or to pass the long months of winter, the story tellers would tell tales to entertain and thrill their audience. They were the first creators of fiction. They told stories of the hunt, stories of their travels and stories to explain the good and evil of nature that surrounded them and affected their lives. They created the gods and goddesses to awe and inspire their people. Over time, those stores were embelilshed and exaggerated in order to capture and hold the attention of their audience and explain the mysteries of life and death that they had to live every day. Fact and fiction merged, making it difficult for the people to know the difference. The gods became real. Magic became real. Superstitions became a way of life. Fiction became fact. Religions were formed.

As religions formed, man and woman had different roles. Woman was honoured for her ability to create life and nurture that life with the milk of her breasts. She was compared to the earth, the earth also having the ability to create life with growing plants and nurture humans with the food it supplied. Statues were made depicting a large breasted, big bellied woman, representing the earth mother. Her facial features were hidden or smoothed since it was to represent all women and the earth itself. The man's role became separate. As protectors of the woman, while she cared for the next generation, and suppliers of meat from the hunt, his role became more spiritual. He learned to read the signs of nature; the colouring of the trees for the seasons, the smell of the air, the forces of tides and weather. As in all natural beings, both roles were dependent on each other. All animals had male and female. All humans had male and female. It was only one step further in their superstitious minds to create the gods to have both male and female. That became the beginning of the religious aspect of a god and goddess. The goddess was of the earth and the god was of the air or the heavens.

In the past, Woman was the basic head of religions on Earth. Herbal lore was passed down from Mother to Daughter. It was women that did the cooking and, through trial and error, learned about the plants for both eating and medicine. The clans would meet, following the only calendar they knew, the moon. Dates were easiest to know it was time when the moon became full. The people would gather, to find mates, exchange stories and compare notes about healing. Women became powerful in their abilities to create life, nurture their children and then to hold sway over life and death with their healing abilities. They talked. Men hunted, remaining mostly quiet so as not to scare away the game. Men started to fear the power of woman when women became the Priestesses and Wise Women. Women had too much power. Women were given gifts of food, precious metals and gems for their knowledge. Men wanted more. In time, man rebelled, cancelling out the female gods. The male god took over. Men misused their power of strength, something that was to be used to protect, and instead ruled with hard justice. Jewish, Christian and Moslem are just a few religions that made women subservient, obedient to men and made them second class citizens in a man's world. Women became possessions instead of leaders. Women learned to fear their men. Man, in his role as Priest, negated the priestesses and ruled with an iron hand. Women were to obey or be punished for their disobedience. Religion, instead of beautiful and mysterious, became a form of brainwashing. All were to believe was was told to them by the priests, or suffer punishments of becoming outcasts or even physical harm. In time the religions run by women faded into history and they suffered the wrath of the new God. God became harsh, even beyond the harshness of nature. The mysteries became Male. Words were written, mostly by men, to be accepted without question. The concept of female gods was almost wiped out and it is only recently that the Earth Mother is again accepted, or partially accepted. Women in this century started to fight back, wanting again to be treated as equals and part of the great mysteries of life. Thousands and thousands of years of abuse is only now starting to be changed with the acceptance of women as partners, healers and, of course, human.

Are the Gods and Goddesses Real?

Gods and Goddesses were meant to be ideas, not actual people. They represent our hopes and dreams. They came to be represented by statues and art. From such art, they became very real in the minds of man. The pentacle represents mankind, the five pointed star being the head, arms and legs of man. The circle surrounding that star represents the cycles of time and space, the universe. The gods are all around us, in the trees, the rocks, the air. They are part of us. They are as real as the objects they form. We are the gods and goddesses. We are the god and we are the goddess in human form. We are life.