Church etiquette within Protestant churches is as varied as Protestantism itself. Liturgical churches such as Anglo-Catholic Episcopal Churches and some of the more formal Lutheran Churches, require you to be very formal and dignified. On the other hand, many African American Baptist churches, charismatic and Pentecostal churches are lively and informal. A few basic principles, however, apply to all churches.

Sit where you can see several people who appear to members and pick up your cues from them. Every church has times and places for socializing with other church goers, and every church has times and places for silent prayer and meditation. As you enter the church, look around. In some churches people use the time before the service for prayer. When you see others praying, use the time to pray if you wish. If you don't wish, sit quietly and respectfully of those who are praying around you.

Most churches perform part of the service seated and part standing. You will be able to tell which is which immediately. If you can't stand as long as the rest of the congregation, nobody will fault you if you sit during singing. But if those around you are standing to pray or standing while the gospel is read, try to stand with them if at all possible. If others around you are kneeling and you are uncomfortable kneeling, you may sit. If someone is seated directly behind you, sit forward on the edge of your seat to give them room to kneel behind you.

Some rites in Protestant churches are reserved for Christians only. Communion, also called Eucharist, is the one you are most likely to encounter. If you are a Christian and you would like to receive communion in a church you have never been to, it is best to talk with the pastor, minister or one of the elders before the service to get permission. If you are not a Christian and the elements of Communion are passed, pass them to the next person. If everyone goes to the front of the church, make way for people to pass, stepping into the aisle if necessary, and wait in the pew while they go to the front. If you would like to receive a blessing instead of Communion, you may go forward. Cross your arms on your chest with the palms of you hands on your shoulders. The minister will perform a bless

Protestant churches share rules of etiquette with other public venues. Turn off your cell phone. Treat other people as you would wish to be treated. Talk quietly in quiet places. Don't eat or drink during the service. Wear clothes that are unlikely to offend people with conservative sensibilities. If you come the the church with respect, nobody will hold minor infringements of etiquette against you.

More About Church Etiquette on Amazon 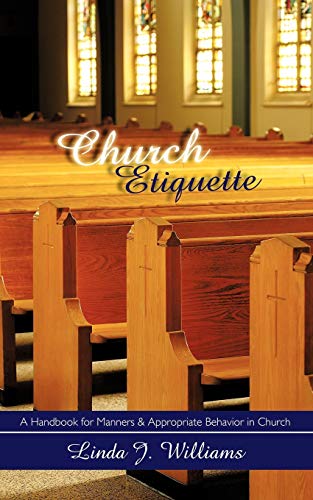 Church Etiquette: A Handbook for Manners and Appropriate Behavior in Church
Buy Now