Psychic Ability: Do You Have It? How to Get It.

Whether you call it a hunch, woman's intuition, or just plain common sense, psychic ability is basically learning to be quiet and listening to that little voice in your head.

I Have a Hunch

Psychic ability is something I believe everyone has to one extent or another. Whether or not you use your psychic ability probably depends on your upbringing. Many of my childhood friends and Mennonite neighbors were brought up believing that using your psychic ability or dabbling in the paranormal was taboo. In my case, however, (no big surprise if you read my hub about THE FARM) no one in my family discouraged me from exploring the subject, so when the bookmobile stopped by my house, my Grandma Jennie helped me get a card, and I took out as many books on the subject of psychic ability- and also on UFOs, which is another story... - as I could find, which in the 60's were far and few between. Later I discovered FATE magazine and devoured everything I could about extra-sensory perception and how to increase my psychic ability. My old Book of Knowledge encyclopedia had information about using cards with symbols, so I created my own cards.

I have a funny story to tell you about the first time I listened to that little voice in my head.

Back in the 60's my grade school held an annual field day. Being in a rural area, basically everyone lived on a farm and so several of the fun events involved catching baby farm animals as a prize. I was ten years old and not very big for my age. However, as all the children between the ages of 6 and 17 gathered around to participate in the event, I knew I was going to win. The prize was a guinea hen. Dozens of my schoolmates surrounded her and before I knew it, I was walking home with Ms. Guinea, who wasn't too happy with me, and promptly pooped on me! She became another pet in our farm menagerie, and did lay nice little eggs which we enjoyed for breakfast. Oh, except for Aunt Rachel. She wouldn't eat them because they looked "icky" to her.

That is one of the ways you can tell if you have psychic ability. You know . You just plain know. Without a doubt. Period.

Once I caught on to listening to the voice in my head, I was...

I'm Off to the Races, literally!

Perhaps my most exciting experience was when my father took me along with him to the local harness races. I stared at the program and mentally picked a few winners, and my father told me I brought him luck.

And I can find lost items

This story takes place after I was married and living in Bridgeport, Connecticut. As I was leaving for lunch, a co-worker of mine was complaining that she had lost the decorative button off one of her shoes. Out and about the city during my lunch break I suddenly got that "knowing feeling" that comes with psychic ability, and the voice in my head told me I was going to find the button. As I made my way back to my office, I "received" an impulse to turn my head and look to my right, and in the middle of the busy street was an object, which I knew was the button. Returning to the office I approached my co-worker and said "hold out your hand" and dropped the button into her palm.

Usually my premonitions come to me while I am in a quiet place or while doing something where I am not really thinking about anything such as vaccuming, applying makeup, taking a walk or meditating.

One day, as a senior in high school, I was just daydreaming, walking about the farm, thinking about nothing in particular and I suddenly knew that my boyfriend's cousin was pregnant. The words "Ruby's pregnant" jumped into my head. Later that week I learned that she was, in fact, pregnant and had to get married.

On another occasion - same type of environment - just daydreaming while walking, I knew my cousin was engaged. Sure enough, within the week my mother told me that my cousin had gotten engaged.

With all the practicing with the cards, etc. I was getting quite proficient with my psychic ability by the end of my senior year of highschool to the point where I was reading minds.

My best friend and I were in my bedroom doing psychic lessons. This lesson was to see who was a "receiver" and who was the "sender" of messages from the mind. My friend would think of an item in the room and I was supposed to tell her what she was thinking about. She was thinking about a photograph of someone, of which there were two. I began seeing the photograph in my head and said it was "not that one" pointing to one of the two, "it's THAT one" which was the actual photo she was visualizing.

Tools to Improve Your Psychic Ability 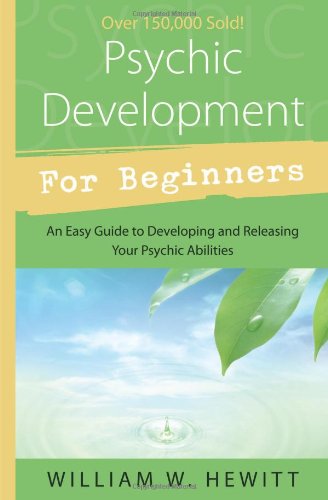 Psychic Development for Beginners: An Easy Guide to Releasing and Developing Your Psychic Abilities
Buy Now

Speaking for myself, I usually get messages while I am doing something that doesn't require thinking such as brushing my teeth, or combing my hair or vacuuming. I'm just staring into space basically.

Another friend said: "Guess where I went last weekend?" and I immediately knew: "Peachtree Street" I replied, to her amazement.

How to Develop Psychic Ability

Do You Have Psychic Ability?

HOW TO INCREASE YOUR PSYCHIC ABILITY

Later, I made my own cards with different symbols on them, and my girl friend would look at a card and try to send me a message about which card it was. Other times, she would think of an item in my bedroom and I had to guess what it was. We practiced every day after school and I definitely was a "psychic receiver", my mind continually gathering random information like a little sponge.

Another way to increase psychic ability is to use a ouija board. It is a way to achieve a state of mind that allows a psychic receiver to get information. Then the information is spelled out. However, some of the information could come from a departed spirit as well, so be prepared for that if you decide to fool around with one.

Still in my teens, I purchased a baseball-sized crystal ball through an ad in Fate magazine. However, I had a very unpleasant experience, which scared me very badly and I gave up staring into the crystal. Basically, a large orb appeared in front of me as I was climbing the stairs one night. I had not been gazing at the crystal, but the vision was larger than a basketball and I later learned that this experience is often related to a visitation from another dimension or possible alien abduction. It was in this house that I later learned my sister and aunt had experienced alien abduction dreams! I will write about that in another Hub.

After I moved to North Carolina I decided to get tested. I went to the Rhine Research Center in Durham and was officially deemed as having above average psychic ability.

Nowadays I can read my husband's mind, which is not always a good thing...if you get my drift. Good for me, bad for him.

For More Information About Psychic Ability I Suggest You Read:

There is a River by Edgar Cayce is a Must Read.

There Is a River
Buy Now

More Hubs About the Paranormal by Lilleyth