We can all relate to having a negative feeling about a person, place, or event. That tension one feels that makes it uneasy to stick around. At times we rationalize these feelings by telling ourselves that the person looked funny or that the place was just to crowded, but we have all caught ourselves saying... "I just got a weird feeling or I just had a really bad vibe." What is it that we are feeling in these instances? These are messages from our subconscious-mind telling us that this is not the situation for you to be in. Most everyone in their life has had psychic experiences but just doesn't realize they are happening or have happened. We can learn to build on those random experiences and harness these abilities.

What is meditation? Meditation is the practice of being in the moment and of the mental release of mind noise or random thought. Rythmic breathing, sitting in a lotus, upright, or cross-legged position with your palms up in your lap, your goal is to reach a state of mind where you feel as though you have little touch with the outside world and that the mental state you are in is more real to you than that of the physical world in which you are seated. This is called the alpha brainwave state. Once you learn to recognize that you are in this state you can begin to sharpen your awareness of your subconscious-mind. In this state of mind you are more open to the quantum (akashic) matrix field that surrounds all matter in the universe, this is where the psychic or sixth sense emanates from.

There are tools to help you meditate if you are one of those people (LIKE ME!) who just can't get themselves to that level of deep relaxation.

There are many others... finding what works best for you is what I suggest.

Telepathy - The ability to communicate mind-to-mind with another.

Intuition - Similar to clairsentience, this is the power or faculty of attaining direct knowledge or cognition without rational thought or inference.

Empathy - The talent to sense the needs, drives, and emotions of another. As with Aura Reading, psychic ability can often reveal itself through the development of empathy.

E.S.P. - Extra Sensory Perception is the awareness of information about events external to the psychic that are not gained through the senses and not deducible from previous experience. Often used to describe clairvoyance, precognition, telepathy, etc...

Remote Viewing – Related to E.S.P. Developed by the US military and Stanford Research Inst. In the 60's and 70's to combat the Russian Psychic Spy Program using strict protocols and double blind intel gathering. Remote Viewers record their impressions from blind targets by writing words that describe the target and by using drawings, in this way they are able to record impressions about the target with no information but the targets randomly generated number.

Psychometry - Also known as "object reading", psychometry enables a psychic to pick up on psychic impressions (vibrations) left on an object by someone connected with it. Someone with this ability could use an unfamiliar object to reveal much about its owner.

Dowsing - Also known as "water witching", dowsing involves the use of a rod, sticks, or pendulum to locate water or lost objects.

Precognition - Quite simply, "knowing the future". However, since time is a dynamic construct, no one psychic can ever know every detail about the future. Usually this ability refers to knowing general outcomes of specific courses of action, with occasional flashes of detailed insight.

Divination - A broad term that includes fortune telling, precognition, prophesy, and other methods used in an effort to predict the future.

Clairsentience - In this instance the psychic has an insight or "knowing" of and a hidden or forgotten fact.

Clairvoyance - Usually confused with Precognition, this ability actually has much more in common with "Remote Viewing", True clairvoyance is not the abilitly to see into the future, but the psychic ability to see visions of that which is hidden or far away.

Clairaudience - Put simply, this type of ability is used to hear what is "inaudible". For example, someone with this ability could be a thousand miles way and "hear" a loved one's cry of distress.

Channeling - Associated with mediums, this is the ability to act as a channel or vessel for an outside intelligence.

Automatic Writing - Writing through the subconscious mind without conscious thought, or through the guidance of an outside intelligence.

Aura Reading - The ability to see the energy fields that emanate from living beings. Psychic ability can often reveal itself throught the seeing of auras.

Astral Projection - The ability to leave one's body and travel in spirit to another location.

Telekinesis - Also known as psychokinesis, the ability to move objects with one's mind.

Pyrokinesis - The ability to start fires with one's mind.

Psychic Healing – The ability to heal a person physically at a distance or in person by manipulation of that person's energy field or by intention.

Mass Consciousness Intention – A group of people focused on changing an event or creating an event by using focused thought.

After you have mastered your meditation you should be ready to start focusing on your psychic abilities. Many people find that when in a meditative state that they are able to visualize their energy centers also known as chakra points that are located throughout their body. These points are located in certain areas of the body. They are associated mostly with the body's endocrine system.

Using visualization while practicing your breathing you can invision your energy centers becoming more and more bright and filled with healing and connecting energy, feel them vibrating and filling you with light. Imagine warmth or healing flowing through you and starting from the base of your spine move the energy upward towards your crown chakra and feel your mind as it opens and connects with the universe.

Step 2. Tuning Into Your Abilities

Now that you have learned to open your chakras you may focus your thoughts on being able to tune into the subconscious mind or super-conscious mind of the universe. Once you've reached this state of mind you can begin to tune your mind to filter out your thoughts from those that are being received from an outside source. This is like listening to a radio and using a dial to tune into the station you want. Your own thoughts are the static and those that seem to be intrusive are those being received from nonlocal means.

Depending on the ability you choose to work on you will have to learn mental dicipline and concentration. The more you work on the ability the more you will learn to use or preform the ability. Don't give up just because you didn't get the results you were wanting, even those who have practiced for years using their abilities will have a bad day. So remember not to give up... You will get to the point where you can use your abilities.

Most merchant psychics still use divination tools. Divination tools are used almost like a ritual that helps the psychic to tune into their impressions. When using them it is easier to gain access to their subconscious by trying to relate the random object relations that each item has to the feelings and impressions the psychic feels from the customer or person being read.These tools can be a deck of tarot cards, runes, colored stones, and other tools.

In the beginning let your impressions be the best way to guide you. Don't argue with yourself about how you may be right or wrong. The smallest impression or the weirdest one may not seem relavent now but in an hour or in days it will. Try not to let other peoples feelings and doubts effect you as you are practicing your ability. We are all human and human thoughts will affect us but your will and ability should be enough to counter their negativity. I mean would you let someone say... "hey I doubt you can see these words well enough to read them" and then go blind from their words? No... you have the power to move past their and your negative thoughts. Let the impressions come, filter out the noise, keep focused, practice your ability and in time you will be a conditioned psychic. 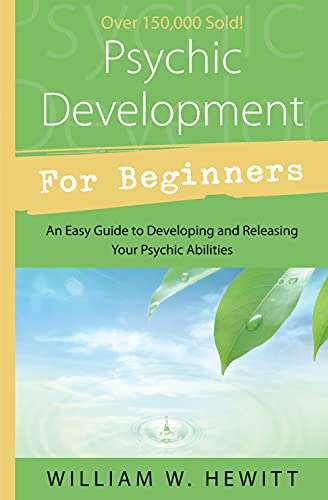 Psychic Development for Beginners: An Easy Guide to Releasing and Developing Your Psychic Abilities
Buy Now