Shiva is the Lord of the Universe. He is the Destroyer and Protector. He is Ardhanarishwara; half man and half woman. He is Neelakanta, who drank poison to save the three worlds. He is the omnipotent, omnipresent and omniscient Lord. He is the God of Gods.

The followers of Hinduism have deep faith in Lord Shiva. In the old scriptures, Lord Shiva had been described as 'Adi' (The Beginning) and 'Anta' (The End). He is also called 'Bhole Bhandari', 'Bhole Baba', 'Bhole Nath' and so on. In fact, you maybe surprised when knowing that Shiva has 1008 names, which describe his attributes. Let's examine some of the notable features of Lord Shiva.

Shiva wears the crescent moon on his forehead, from which flows the celestial river Ganga (for Hindus, the river is Goddess). His body is smeared with ash and a tiger skin in girt around his loins. He has four arms which carry a trident (Thrisul), an ax and the other two are set in classical mudras granting boons and removing fear. The Lord has three eyes through which he can view the past, the present and the future. The three-eyed aspect of Shiva is deferentially referred as 'Virupaksha', 'Triaksha', 'Trinayana' and 'Tirnetra'. The third eye is of higher perception, looks inwards. When its vision is directed outwards, the searing intensity of its gaze emblazons and destroys all it looks at. Yes, opening of the third eye means a signal of danger!

The trident of Shiva, his 'Trishul' represents the triad of the creator, the preserver and the destroyer. His spear, the 'Phashupatra', is the weapon, with which he destroys the universe at the dissolution of the 'yugas', the ordained time cycles. His ax is called the 'Parashu', which he gifted to Parasuram. He also carries a club called the 'Khatvangi', which has a skull at its head. A garland of skulls is around his neck, which earns him the epithet of 'Kapalin'. The drum in his hand, the 'damaru', heralds the dance of creation.

Shiva is the God of Life and Death, of Destruction and Rebirth. Shiva is Mahadev or The God of Gods. He is also a good dancer. Shiva 'Thandava' means his ferocious dance. This is the death-dance of Shiva.

The sanctum sanctorum of every Shiva temples contain a stone 'linga'. (Linga or Lingam means Penis). The linga is worshiped as a 'swayambhu', a self-born stone. It is the object of the greatest sanctity. It is always vertical, pointing upward.

When we talk of Shiva temples, the earliest surviving temple is in the Angkor Wat complex in Cambodia, dated at approximated 880 AD has a central Shiva court dedicated to the sacred Shivalinga. In India, the land where the largest number of Hindus live, the most famous and revered temple complex associated with Shiva is the Chidambaram temple in Tamil Nadu. The temple is dedicated to Shiva as Nataraja, the cosmic dancer.

Shiva is everywhere in India. In art, film songs, paintings, living prayers and rituals, everywhere you can see Lord Shiva appearing. The great god lives in the hearts and minds of Indians and more precisely that of the Hindus.

Shiva is 'Adi' and 'Anta', means the End and the Beginning. Like Shiva, his stories too never end.

Some famous Shiva Temples in the World

Have you ever been to a Shiva Temple? 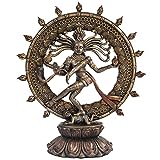 My Other Hubs related to Religion & Spirituality