Silk and the Egypt Connection

Silk's narrative down through history is an interesting one to say the least. Consideration of God's decoration of silk for Jerusalem once again takes us back to the Tabernacle, and by extension, to Ancient Egypt from where the Hebrews would have obtained such cloth. The question then, is how on earth did Egypt get it? This cloth was not native to that land, nor native to any regions close by.

The answer is found in what can only be described as the beginnings of the Silk Road, long before "official" records were found. The Silk Road is said to have begun with the Han dynasty in China around 206 BC. But when we consider the roughly estimated date of the Exodus, we find ourselves looking at anywhere from 1200 BC to as far back as the 1300's BC. A map pictured here, shows the Silk Road as it was understood by those who have tracked it's history. Note the sea-routes. This was most likely how the Egyptians obtained it before the later-understood dates of the Silk Road. It is possible they obtained it via caravan trade routes from India as well, as both India and China appear to have discovered silk around the same time. But the fact that the Hebrews had it in their possession prior to the commonly understood discovery and trade of silk, would suggest that such cloth was already being created at least 1000 years before the Syrians and Romans heard of and made record of it. Egyptian mummies have been found with silk in their hair.

How Silk is Made

Natural silk is derived from special silk worms that create the silk from spinnerets in their heads while creating their cocoon. In ancient times, these cocoons would be found after the larvae had left, apparently producing shorter strands of silk than cultivated cocoons now. Animal rights activists actually prefer this older method of gathering cocoons, as more larvae live than the numbers the farmer chooses to maintain his stock.

Once the cocoons have been soaked in boiling water, the strands are separated from each other. Two or three strands from different cocoons will be wound together to make a workable thread. A cocoon where the larvae did not hatch, will produce a single mile-long strand.

Silk, unlike linen, will lose up to 20% of it's strength when wet. It shrinks a fair bit when first washed as well. If it is stretched, it generally does not spring back into shape, so it is a delicate cloth. It is also prone to being eaten by other bugs. But with all those negatives, it does have some positives. Silk is also cool to wear in the summer, and helps to trap heat in the winter. Similar to linen, it has been put to a wide range of uses over the centuries, including undergarments, pajamas, handkerchiefs, all the way up to kimonos in China and other garments worn by royalty. Silk has been seen as a status symbol, announcing to the world that the wearer is of the nobility or royalty. Due to how each strand of silk is formed, the shimmering nature of it's appearance, no matter the dye given to it, will produce the appearance of other colours as it is turned in the light. 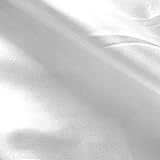 What does this mean for the Bride of Christ?

God included silk in the set up of the Tabernacle in the wilderness, and includes it in His list of adorning garments for His Bride. It is this author's conjecture that more than any of the other garments covered to this point, silk truly shows the royal, regal nature of this Bride. She is not just any bride preparing to marry any young man. She has been claimed by royalty, and being given the garments of royalty to wear on her wedding day. The shimmering colours as they appear in the light as she moves, display the varying attributes of her noble nature given to her by her Bridegroom.

But she must be careful. Allowing her silk to become consistently soiled will invite the ravages of sin to eat away at it. Trying to prepare for her wedding day while playing in the world will stretch her, to the point where she will not return to what she once was. It is her duty, as the future Bride to the Heavenly Bridegroom, to keep her garments clean from the ravages of sin, to resist the temptation to stretch herself across both sides of grace and sin, and to keep her garments bright and ready for her wedding day.