Spiritual Reclaiming of The Black Hills of South Dakota

Signing of Treaty of Fort Laramie 1868

Black Elk Speaks: Being the Life Story of a Holy Man of the Oglala Sioux
Buy Now

Spiritual Reclaiming of the Black Hills of South Dakota

Back in 1868 the United States Government signed at treaty at Fort Laramie in the Wyoming Territory that guaranteed the Lakota tribal ownership of the Black Hills (Paha Sapa Wakan), and further land and hunting rights in South Dakota. Signing the treaty on the government side was General William T. Sherman and on the Indian side a number of tribal leaders including famous Chief Red Cloud (whose image is on the front of the buffalo nickle).

White gold miners repeatedly violated the treaty in search of the yellow metal leading to the Black Hills War. The U.S. Government ultimately seized the Black Hills in 1877 for miners' and settlers' security in direct violation of the Treaty of Fort Laramie. But good news eventually came to the Lakota people over a hundred years later in 1980 after a court case United States v. Sioux (Lakota) Nation of Indians The United States Supreme Court upheld the award of $17.5 million dollars (fair market value in 1877) along with over a hundred years of interest at 5% making the total retribution award of $122.5 million dollars.

However, the sacred Black Hills were what the Indian people wanted--not raw cash. So they refused the money. The government put this award money in an escrow account. The Lakota Nation continued to request portions of the Black Hills (The Black Hills National Forest) that were not owned by private businesses or private individuals.

Five years later U.S. Senator Bill Bradley (NJ) sponsored Senate Bill1453 to return portions of the Black Hills to the Lakota Nation. As a concerned citizen, I wrote my Senator, Alan K. Simpson, in support of S.1453. Senator Simpson promptly wrote back saying: "I do thank you for your letter regarding S.1453, Senator Bill Bradley's bill which would convey certain lands to the Sioux Nation. I appreciate knowing of your great interest in this proposed legislation." Senator Simpson went on to explain that S. 1453 has been referred to the Senate Select Committee on Indian Affairs. Once the committee makes its report back, he and all senators "will take a stand on the bill." Unfortunately the bill never got out of committee! It died there in committee chambers.

In 2004 my wife and I went to the Black Hills to climb Harney Peak. It is named Harney after a General who succeeded in placing all Lakota peoples on reservations. Harney Peak should be called by its proper name Hin Han Kaga Paha (Sacred Scary Owl). None the less, we climbed this sacred peak in honor of the holy man of the Oglalla Sioux, Nicholas Black Elk* (see the book Black Elk Speaks) who sought visions there. Just before the summit, we came across a sacred prayer bundle made of six different colored ticking: red for the East, yellow for the south, black for the West, white for the North, tan for the Earth, and blue for the Sky. These colors represent the powers of the six sacred directions (see accompanying photo).

There is hope in this spiritual statement. Not only are there prayer bundles throughout the Black Hills but also prayer flags of the six powers. The Black Hills are sacred and are used by tribal peoples in their seeking of visions (hambleycha). Can not a small portion of the Black Hills be returned in honor of the Treaty of Fort Laramie in 1868? Cannot the Black Elk Wilderness area of Black Hills National Forest, at least, be returned?

*For those wishing to read a hitherto unpublished prayer of Black Elk, see my book Breaking Through the Clouds (2005)

Are the Black Hills are part of the Rocky Mountains? 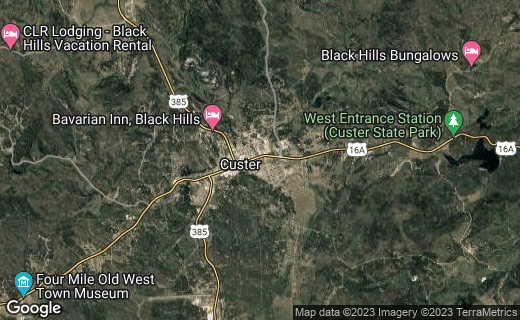