When Ruth's husband, brother-in-law and father-in-law all died suddenly, Ruth stayed with her mother-in-law Naomi even as her sister-in-law Orpa returned home.

"In the time the Judges were judging...", according to the biblical book of Ruth, a rich man named Elimelekh took his family to Moav (Moab) because there was a famine in Israel. His sons, Mahlon and Khilyon, married a couple of local women, Ruth and Orpa.

Ruth as a symbol of loyalty, devotion and love

By Staying with her Mother-in-Law, Ruth also Accepted the Tora

"In the time the Judges were judging...", according to the biblical book of Ruth, a rich man named Elimelekh took his family to Moav (Moab) because there was a famine in Israel. His sons, Mahlon and Khilyon, married a couple of local women, Ruth and Orpa.

Soon after, Elimelekh died. Then his sons died. The three women were left alone. Naomi, Elimelekh's wife, then decided to return home to Israel. Her daughters-in-law said they would go with her. Naomi told them both to go home to their families. Orpa kissed her good-bye and went home to her family. But Ruth vowed to remain with her saying "Wherever you go I will go, wherever you lodge I will lodge, your people will be my people, your G-d will be my G-d."

So Ruth and Naomi went back to Israel and lived together. Though Elimelekh had been rich, their wealth had been lost and Naomi and Ruth were very poor. So they had to go to the fields and pick the food that was left by the owners as charity.

When they went to one field, the owner, Boaz, saw Ruth. He noticed that she never took anything except from what he was required to leave by Jewish law. This attracted him because he saw that she was a moral person. He asked her to marry him and she did. Together, they had a son named Oved. Oved had a son named Yishai (Jesse) and Yishai's son was David. David was the second king of Israel, the king whose descendants were a dynasty.

Because Ruth accepted the Tora on herself, we read the book of Ruth on the holiday that the Children of Israel accepted the Tora -- Shavuot or the Feast of Weeks, which comes 7 weeks after Passover in the Jewish month of Sivan. Shavuot is one of the 3 Pilgrimage holidays during which the people would come to Jerusalem. These three holidays are Passover, Shavuot and (Sukkot).

It should be noted that Ruth was the granddaughter of Eglon, the king of Moav in the time of the Judge Ehud the son of Geira. Ehud was sent (by G-d) to kill Eglon (who was oppressing the Children of Israel). When Ehud came to the king (he was left-handed, so he was able to hide his sword on the right), he said he had a message from G-d. The king stood when he heard that Ehud had a message from G-d and Ehud killed him. But because he stood at the mention of G-d's name, he merited to be the ancestor of such a great woman as Ruth.

Ruth and Shavuot products from Amazon - Vote for your favorite 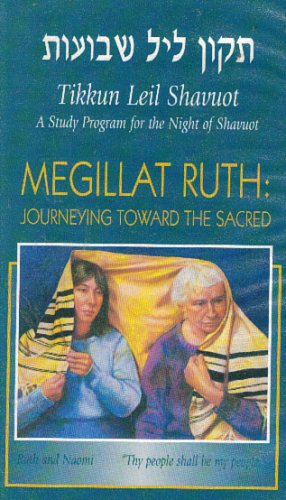 Megillat Ruth: Journeying Toward The Sacred (Tikkun Leil Shavuot, A Study Program For The Night of Shavuot)
Buy Now

Our Family Size Dessert Tray includes; a delicious Gourmet assortment of hard to find Kosher Old World Sweets &amp; Nuts... A large six sectioned tray 10" across filled to capacity with a Gourmet assortment of Freshly Rosted Salted Pistachios Chocolate coated Pink &amp; White assorted Treats &amp; other Chocolate delights plus Crunchy Gourmet Nut Chocolates... Need I say more this is truly family size! And most importantly everything is certified Kosher Parve (OU). That means it can enjoyed after any meal..... 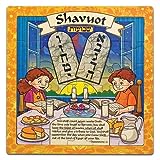 Healthy and Tasty... Our very own EXCLUSIVE Shavuot "Stay Awake" Treats... It is a Tradition... for thousands of years Jews all over the world stay up late on Shavuot Night to study the sacred Torah texts... Some even stay up all night... So to make staying awake easier we developed our Shavout "Stay Awake" Basket... Ideal gift for Shavuot... Or for that matter... anyone who appreciates Healthy Gourmet Treats. Contains the following sacks of Healthy and Tasty Gourmet Snacks! (All items Kosher (O...

An Association of Jewish Libraries Notable Book for Younger Readers.

A delightful and visually witty storybook that recounts the biblical Exodus from Egypt, Shuli and Me walks families through the Omer period (the seven weeks between Passover and the Feast of Weeks). Because it is told from a childs perspective, the book engages children with the excitement and fears of escaping from slavery and experiencing freedom for the first time. As the characters journey through the desert to Mt. Sinai,...

A Mountain of Blintzes

Each spring Sarah, Max, and their children look forward to celebrating Shavuot with a mountain of delicious blintzes. But this year Sarah and Max are worried. Their pockets are empty, and with no extra money to spare, how can they afford to make a special treat like blintzes? Join Barbara Diamond Goldin's funny, big-hearted family in preparation for Shavuot, the Jewish holiday celebrating the day Moses received the Ten Commandments, and discover--as they do in a way that's sure to spark giggles-...

This canvas bag is only one of several Judaica themed items at our store:

I just discovered Printpop -- check out my entire portfolio or click on the graphic to see just this product (called "Jewish Star Puzzle"). Check back periodically as new designs are uploaded.