Taoist alchemical practices can lead to what is called immortality, or survival of the soul past death. The tale of the Eight Immortals in Taoist annals is not a myth.

You don't take a magical elixir or pill to achieve this goal, the goal that many ancient alchemists sought after. Rather, it is a process that requires persistent and deep meditation that works on your internal awareness. Spiritually enlightened Taoists are called hsiens.

Advanced Taoists most often have the help of masters in this art, but there are books that describe the methods of cultivating internal energy within the body and there is also a book that discusses modern-day immortals. Both works are discussed below to provide evidence of this possibility and how to do it yourself, if you are so inclined and gifted.

Immortality has to do with survival of the soul or energetic being after death, whereas longevity is obviously, extension of life. Taoist practices help create longevity in this life, and for those who practice it even more deeply, or have the luck of an working with an enlightened teacher, will have a chance at achieving immortality. 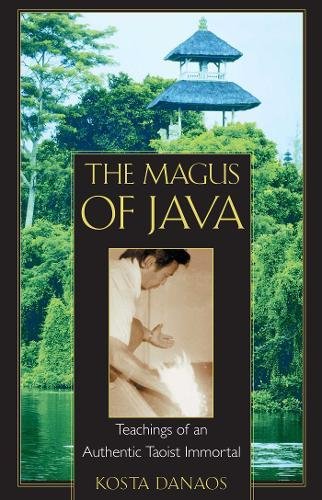 The Magus of Java: Teachings of an Authentic Taoist Immortal
Buy Now

Master John Chang and "The Magus of Java"

The Magus of Java is a book that is written about an encounter with master who lives or lived in Indonesia. The author, Kosta Danaos, narrates and explains how he encounters this master and his experience with this person who is known as John Chang. Parts of the book describe the extraordinary talents that Chang has, as well as the rungs up the ladder in levels of talent that one needs to reach immortality. Chang's master, as told by Chang. achieved immortality.

The documentary video of John Chang below illustrates some of the outward gifts that come from meditation which focuses on accumulating energy and gaining a balance of both yin and yang energies. Scientists also evaluate the nature of his energy with instrumentation.

Meditation is the key for achieving these talents, which are outward signs of having the ability to carry these energies past the mortal form.

A Documentary About John Chang

Differences Between Qigong and Neigong

Qigong is a term for Taoist exercises that work with the breath and movement. I have described in length in my articles on HubPages and on my website qigonghealingarts.org. In a nutshell, it involves exercises that help open up the energy channels, increasing health and balance. It is more considered as external work in Taoist circles. Much has been reported on its positive health benefits in the scientific literature and it is becoming well known.

Neigong or Nei gong, on the other hand, includes exercises that bring about internal changes in the practitioners. These exercises elicit internal changes within the bodies of practitioners that can result in extraordinary abilities, such as those seen within the video above. There are differences in the type of practices and the depth of practice, as indicated in the video to the right.

It is the difference in commitment and depth of practice that helps move one towards immortality.

The Secret of the Golden Flower
An earlier translation by Wilhelm Reich is viewed as less accurate in its translation of this ancient work.
Buy Now

The breath is a way of introducing early practitioners to qi and energy movement in meditation. The microcosmic orbit, which goes up the back and down the front of the torso, is an energy circulation meditation that helps bring the energy in focus and runs it through the proper route of circulation for gathering energy in the lower dantien (which is in the center of the body below the navel).

Books which have outlined this procedure include "The Secrets of Cultivating Essential Nature and Eternal Life" by Master Chao Pi Ch'en, who was born in 1860. An English translation of this work was published in 1970 by Lu Kuan Yu, entitled "Taoist Yoga - Alchemy and Immortality. The translation can be found online for a free download.

Other works that discuss practices for enlightenment and achieving immortality include "The Secret of the Golden Flower," of which the translation by Thomas Cleary is viewed as the most accurate. Another book that translates many works on breathing practices, is by Dr. Yang, Jwing-Ming, mentioned in the Amazon books to the right.

The Rewards of Taoist Immortality Alchemy

Meditation helps improve one's health, there are many studies that have shown this to be the case. However, this is meditation in its most shallow sense. It is the use of meditation as a cure, not as a springboard for discovering one's soul and relation to the universe. As I said before, this type of neigong for internal alchemy requires depth of practice.

If you wish to, or inspired by your meditation to engage in neigong, this is a path of self-discovery and personal enlightenment that has been blazed by others. It is not an easy path, but if you are inspired to go in this direction you have the possibility of achieving mortality and even making the world a better place while you are on this earth.