Ohio has had a long history with UFOs and extraterrestrials. It’s said that the police chase scene in “Encounters of the Third Kind” was inspired by a real sighting in that state.

However, nothing prepared a family for what they were to experience on one cold evening in March.

On March 4th in 1988, Henry and Sheila Baker had decided to take their three kids out for dinner. They lived near the shore of Lake Erie, and as they drove along the shoreline of the Great Lake, Sheila noticed something strange hovering over the icy surface with the bright moon.

It looked like a gunmetal football of epic proportions. It was larger than the Goodyear Blimp and brilliant white lights shone from either end.

Soon, Henry pulled over, and the couple got out of the car to get a closer look.

It rocked back and forth on an invisible axis in the sky for a while. Soon, it tipped towards the shore and began descending for it.

Afraid for their safety, the Bakers fled back to their car, started it up and drove home. 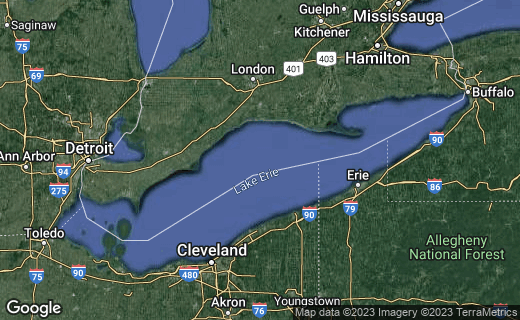 However, they could still see it from one of their windows. As they watched, it continued sinking towards the iced over surface of the lake. Along its bottom, red and blue lights began flashing.

Worried, Sheila called the police. After some conversation, the police referred her to the Coast Guard, no doubt because they weren’t sure of what to do.

The Air Force had stopped investigating UFO phenomenon in 1969, and no protocol was put in place for law enforcement to follow, after all.

Again, they watched the strange craft over the lake. Five or six brilliant yellow triangular ships shot from the large one’s center, and darted around, as if exploring. Eventually, they slowed to hover around the original craft, their points directed heavenward.

Slowly, they all began drifting towards the nearby nuclear power plant.

At a loss, Sheila again picked up the phone, this time to call the Coast Guard.

Thanks to Sheila’s report, Seaman James Power arrived with Petty Officer John Knaub. With them, they brought a Boston Whaler on which to investigate the strange phenomenon.

On their craft, the two men took the Bakers out on the lake.

All around them, ice cracked and shifted with abnormal force. The craft above seemed to be driving the agitation of water and ice as it continued to descend. However, if anyone had expected to hear engines, they would be let down.

Whatever propelled the massive craft and its small companions was completely silent.

As the large ship landed, one of the smaller ones rushed at the whaler. Before it hit, it veered to the east and up before resting by the original craft.

As they watched, red, yellow and blue lights suddenly surged from the craft, and the white light bled red. Again, the triangles appeared before it all vanished.

The moon shone alone in the sky and the ice grew silent in the water around them.

In addition to the sheer drama of the experience, this event is truly unique for two reasons:

To this day, there’s still no reason for what happened. There are military eye witnesses, as well as two more independent witnesses who had seen the triangle shaped ships in addition to the Bakers.

There were no military tests being preformed at that time, and the craft were nothing like anything the technology of the time could offer.

There have been several more sightings of UFOs over Lake Erie. Some go so far as to call it a UFO hot spot.

The videos captured have been very compelling, and the mainstream media has covered these events on quite a few different occasions. Although some may be cases of misidentification, many of them are impossible to explain.

Quite a few sightings have been corroborated by people who don’t know each other, and several have caught the exact same footage from different vantage points on the shore, at the same time.

Whatever the lights are over Lake Erie, they add to the area’s mystique and add credence to the lake’s name.

Have you been to Lake Erie?

Crash: When UFOs Fall From the Sky: A History of Famous Incidents, Conspiracies, and Cover-Ups
Buy Now