The Dolls of Death

Look how Our Lady of Lust comes dancing to the tunes of this little serenade, straight through the front wall of the most haunted house of Bruges-la-Morte.

Look how this carriage with its two dark horses appears out of the fog, closing down to you over the shiny cobblestones.

Look... and listen to the music of Bruges-la-Morte, while you read this true tale of horror... 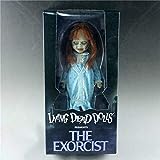 It's said this French lady was once playing a little serenade for her lover in this most haunted house of Bruges-la-Morte.

He was a descendant of the Menapic druids who used to live there. He was a witch and a warlock, specialised in the manufacturing of the Dolls of Death. People often asked him to win a great love or to avenge a broken heart, to get a husband out of their way or to have an enemy dying in great torment.

And then he put a spell on you.

He wrote the name of his victim in the heart of the doll and stabbed it with his hot and poisonous needles, and you were forever cursed.

It is said that this French lady requested her lover with the snow-white locks to use a Doll of Death on her husband. But this grumpy old man suspected something and replaced this pubic hair of his by a snow-white lock of the wicked druid he had found in their bed. And then he went after her, while her druidic lover succumbed under hellish pains in the crotch.

It was in this most haunted house of Bruges-la-Morte that Our Lady of Lust went hiding for the vindictive grumpy old man who was her husband. And it was in this house that a police officer found her body, on a bed soaked with her blood - but where was her head?

And now her spectre is said to be seen, head tucked underneath the arm, wandering through the streets of Bruges-la-Morte and wondering: ‘My dear druid... Where have you gone?'

And not far from there the dark carriage that has taken the grumpy old writer on his last trip to the Lake of Love, plunges itself in the magnificent mirror of the water, as it has done night after night since the beginning of time and over and over again...

in my hospital room

is an alternate reality

"dreamtime" as they call it

of anything resembling human