The Many Faces of Tarot

A Tarot Deck for Everyone

There are thousands of different types of Tarot decks. With themes ranging anywhere from the traditional Rider-Waite deck to the Baseball Tarot deck. There are even programs that you can use to create your own Tarot deck.

Choosing a Tarot deck is very personal and different situations may call for different decks. The deck has to resonate with you to be able to get the full benefit of Tarot. If you enjoy the artwork and the phrases or meanings behind each card, then it will come easy to work with that deck. Many people own several different Tarot and Oracle decks but some Tarot readers are true to their favorite and only use one.

Whether you use your cards for insight or fortune telling, there is Tarot deck out there for you. 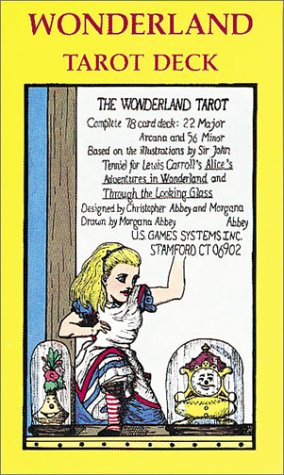 The Wonderland Tarot Deck
The Wonderland was created by Morgana Abbey and published in 1989. A 78 card that cleverly uses the illustrations of Sir John Tenniel in Lewis Carroll's Alice in Wonderland. The deck is based off of Rider Waite System. A fairly easy deck to use. If you understand the Rider Waite System, then you can easily adapt to Wonderland Tarot. Once you get used to suits of Flamingos, Peppermills, Hats and Oysters, you are sure to understand and enjoy reading these cards. The deck comes with a book that will walk you through the Alice in Wonderland story and help you understand the symbolism within each card. It's a got to have Tarot deck that has cards the size of a playing deck. It's not just a collector's deck, it's a deck that you can use as often as you would your Rider Waite deck. The illustrations are pleasant and sometimes amusing giving a fresh and new type of reading for the querant.
Buy Now

Smith and Waite created the deck how they envisioned a Tarot deck should be. They made changes from previous Christian decks such as the Pope is now the The Hierophant. A 78 card deck Influenced by a 19th century magician and occultist Eliphas Levi, Smith illustrated scenic pip cards which was a variation from previous simply illustrated pip cards. The illustrations have an abundance of symbolism in the background detail. Ranking is also given to Strength and Justice opposite of the occult. Strength is 8 and Justice is 11.

The Renaissance Tarot deck, (also known as the Golden Tarot), is an updated version of the Rider-Waite deck. Considered to be more of a masculine deck.

Created by artist and author Kat Black and first published in 2004. Black added symbolism to help with intuition, antiqued illustrations of master artworks from the Middle Ages and Renaissance era. Like the Rider-Waite tarot deck, the Golden Tarot has 78 cards.

Best use: Questions about passions, mastery and the human inner workings.

The Toth deck was created by Frieda Harris and Aleister Crowley and first published in 1979. An intense 80 card deck using symbolism from Egyptian spirituality, Astrology and Kabbalah. Toth uses card reversals giving 2 meanings to each card. It does not follow the Rider Waite System. It follows the occult system. Toth is not for beginners. The book that accompanies the Toth deck gives additional reading suggestions to learn how to use the deck. A deck for advanced readers.Crowley removed the Judgement card and replaced it with the card of Aeon. Also Crowley follows the occult version with Strength and Justice with Justice being 8 and Strength being 11.