The Pillars of Islam

The Religion Of Islam

In Islam there are 5 (five) Pillars in which each and every Muslim lives by. It is obligatory for us to follow these beginning guidelines. These pillars are what Islam is built on.

The first pillar of Islam is a profession of faith. This is known as the Shahadah which means testifying ones faith. Simply put the Shahadah is saying, "Ashhadu an la ilaha illa Allah wa ashhadu anna Muhammadan rasulullah", "None has the right to be worshipped but Allah and Muhammad is the Messenger of Allah".

This phrase is the key to becoming Muslim because you are submitting by claiming an oath in a sort to Allah. Contrary to some who think that Muslims worship Muhammad which is strictly forbidden. If you read the phrase completely it states "none has the right to be worshipped but God".

To offer the five compulsory prayers

The second pillar in Islam is completing the 5 compulsory prayers otherwise known to Muslims as Salah. These prayers are done at specific times each day from dawn until dusk. They can be done in congregation at the Masjid or Mosque and where other Muslims are congregated. Also, it can be done at home, in the workplace(if it is permitted), while traveling or where ever you are when the Adhan(call to prayer) is made.

While Salah is obligatory, these prayers are not the only ones that can be made. Du'a is the invocation of Allah in your daily life. It is not mandatory but making du'a helps get through good and bad times. There are more prayers in the Sunnah (ways of the Prophet [deeds, etc.] and of his companions) but I will not name them all at this time.

The best part of having 5 prayers throughout the day is that you have so many opportunities to repent and just stay in a constant rememberance of Allah. This amongst the other pillars is what helps a Muslim submit to his/her Lord and just be in a peace with one's self.

As we move to the third pillar of Islam, to give of one's wealth to charity. In Islam 2.5% is given annually to charity from each Muslims savings. It can be given at any point throughout the year but a lot of Muslims prefer to give their Zakah in one lump sum during the month of Ramadan, which I will speak about in depth shortly.

It is encouraged that you give of your wealth to those less fortunate voluntarily. This is called Sadaqah. Sadaqah is charity that you give freely other than Zakah. The difference between the two is that Zakah is mandatory while Sadaqah is not. Regardless, both are a humble gesture that anyone can make.

The other difference is Zakah deals with your wealth and property, while Sadaqah is more generosity of wealth, words, gestures, etc. This gives a Muslim the opportunity to constantly help others. Doing good deeds and caring for others and your community are smiled upon by Allah and was encouraged by Muhammad.

Each Muslim is obligated to make the pilgrimage to Makkah to the house of Ka'bah at least once in their lifetime if their wealth permits. It is a duty to go back to the Ka'bah but Allah knows that this task is easier for some and hard for others. So it is only obligatory for those who can afford to make the trip.

Traveling is something that some do on a regular bases. So if you have the funds to do traveling why not go to Makkah. The experience that people have changes lives, so I've heard, seen and read. Hopefully, I will be as lucky to travel there.

The final pillar of Islam is to observe the month of Ramadan. In observing this blessed month it is our duty to abstain from food and drink from sun up to sun down. It is also the abstaining from any evil acts, lewd behavior, negativity etc. throughout the month. This month is meant for reflection, meditation, recitation, and prayer.

In this month we focus solely on our religion as much as it is permitted, depending on where you are geographically. We spend our days in prayer, reading Qu'ran, volunteering and anything we can that will please our Lord and bring the Muslim closer to being pious.

The 5 pillars of Islam is the foundation for every Muslim. If any of these elements is removed or forgotten it can cause ones faith to be shaky. Muslims live by these pillars as well as many other things, but these 5 pillars reign supreme. 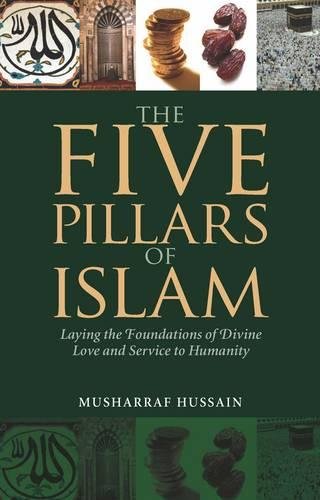 The Five Pillars of Islam: Laying the Foundations of Divine Love and Service to Humanity
Buy Now