The Proof God has Given Me

High points (and a low point)

A response to many questions about "why?"

As many people know, I post a lot on different forums, and in those postings I frequently refer to supernatural experiences I have been blessed with, both personally and vicariously. A lot of people accept it at face value (these people are usually fellow believers,) and a lot of people scoff out-of-hand. There are, however, many people who I talk to who, while they're not believers, and may not be prone to accepting someone's testimony on face value, they at least are interested in what someone has to say or are willing to listen politely.

Either that or I have a masochistic need to cement my reputation as a nut. And never be employed again. You be the judge.

Let me preface my Hub by stating that I did not grow up as a Christian. Many skeptics seem to assume that all Christians are ipso facto members of believing families and have been "indoctrinated" since birth (I don't think they all think this, but I've talked to and read people who have used almost those exact words.) When I was four years old, my parents divorced. My father, who as far as I know was not Christian when they divorced, became a Christian after his marriage to my stepmother. They attended church regularly, and when I was younger I attended church with him. But I did not live with him, my brother and I would visit him for summers and some alternating holidays. We sometimes enjoyed the church services, and sometimes the church community was even a very pleasant place to spend time. My father lived in a number of small towns because of his job with a company that constructed mines, and some of those towns were very, very small indeed.

However, don't get too satisfied with thinking that I've proved your point. My mother's family (and remember, I lived with my mother for a little more than three-fourths of the year) was a long line of free thinkers. I have often characterized that side of my family as "pedantic know-it-alls" and quite frankly I was no exception. My stepfather, who grew up catholic, did take us to mass a couple of times and it was interesting but held no attraction for me or my brother. For all practical purposes, I never attended church when I was with Mom, and after the age of sixteen Dad stopped requiring me to attend church with him, so I stopped.

So by the age of nineteen when I moved to New York City (which is a Hub in itself) I was firmly entrenched in my agnostic ways. It wasn't that I necessarily doubted or believed in God. I really didn't think about Him most of the time. Sure, I was like most people I knew in saying that Jesus was a great teacher, or a great moral man. I certainly hadn't read C.S. Lewis' assessment of this thinking in Mere Christianity and don't know that I would have thought much about it if I had. I was busy doing things that I would rather not go into the specifics of, they're not important to this story. It's only important to remember that I was so not Christian, if anything I was more of a nihilist, and definitely a pessimist.

But i knew a lot of people who were into witchcraft. Don't ask. I never dabbled myself, but I knew a lot of self-professed "neo-pagans" and a few actual wiccans. I personally thought they were all silly. I knew several who thought that if you cast a certain spell, you could get the subway to stop where you wanted it to. The fact is, subway trains are a uniform length, and the train operators are pretty well hipped on where to stop them. It didn't take a genius to figure out that if you stood in a certain spot on the platform, you would be right next to the door when it opened! (And you don't need to say it, I'll say it for you, "If you could figure it out, Chris, then you're right! It doesn't take a genius!") The point is, I didn't take it any more seriously than I did Christianity. I did, however, pride myself on keeping an open mind. In fact, although I can't produce the article for you, the New York Times used to have a piece consisting of snippets of conversation overheard around time and I made it in. I was working at the old Tower Records on Broadway and 14th, down in the the video store in the basement, and several of my coworkers told me they read in it, "I myself am not a witch but I try to keep an open mind." And they all said they knew it was me.

And that open mind was certainly put to the test. Yes, I met a girl. A very, very attractive girl, who for reasons that still mystify me thought I was also attractive. She was a Christian, and she was constantly hounding me to prove that my mind was truly as open as I claimed. She dared me to go to church. Now, I don't take dares and I doubt it would surprise anyone that I don't care if anyone thinks less of me or not for not taking them. But I took this one. I started going to church with her (Pascack Bible Church in Hillsdale, NJ, when Pastor Fred Beveridge was the senior pastor.) I don't know how many times I went before I felt it, but I certainly did. I can't even really describe what I was feeling, but I was feeling something, something that was prodding me. It took some time, but I finally figured it out, it was God prodding me to accept Jesus.

Now let me be clear, I didn't have supernatural experiences. In fact, among the more (pagan) spiritually oriented people I knew I was known as being especially resistant to such things. So I really did not have a background for what I was experiencing. But on that day in August, 1988, I accepted Christ in my life.

It was the first but it wasn't the last supernatural experience in my life. But let tell you upfront, I have never "heard voices." Many times when I say I've heard from God, that's the first thing that most people think and many of them say to me (whether because they're being sarcastic or because they're being sincere,) "Anyone who hears voices needs to get help. Please get psychological help." My wife has heard God's voice, but not the way most people think of. People who suffer schizophrenia sometimes do hear voices, and sometimes those voices tell the people to do things, and sometimes those things are horrible. But neither I nor anyone I know has ever had that experience.

My next truly supernatural experience came a couple of years later. As you've probably guessed, the woman I attended church with did become my wife. We had been married for about a year, and while reading the biography of Keith Green I experienced something that Keith did often, the presence of the Holy Spirit. It was the first of two times for me, and it's like a rush, a euphoria, like something I'd never experienced before. But it's also a feeling of peace, of knowing that God is truly there, in the room with you. I had never done drugs and I certainly wasn't much of a drinker, so I had no previous experience to compare this to. And, as I learned, neither had many other people. Although many people have claimed to experience the Holy Spirit, I didn't attend churches with large numbers of those people. Even other Christians can sometimes look at you funny if they haven't experience it themselves.

Those were the only really direct supernatural experiences for me, personally. My wife, however, had several experiences. A short run-down:

There have also been many times when we needed help, and just when we needed it the most it arrived. Once or twice, I would probably agree that these were coincidence. But it's happened time and time again. I can't write them off as coincidence. God doesn't "talk" to me the way He does to some people, but He lets me know when His hand is in something.

My wife has Stage IV Cancer, and you might think that would test my faith. I haven't lost my faith in God, but it does serve to remind me that He does things in His time and His way. I can't always see the "why," but the "what," God's presence, is still as clear to me as ever.

Have you ever had a supernatural experience 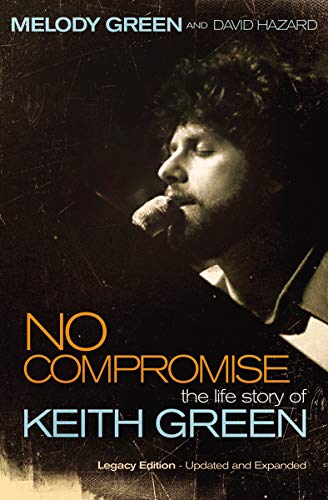 No Compromise: The Life Story of Keith Green
Buy Now