The Real Danger of Religion

M. T. Dremer has been an atheist for more than 20 years and has been debating theology openly for almost 7 years.

I try very hard to be an understanding and compassionate person. I believe that seeing things from other peoples’ perspectives is the key to living harmoniously in a world of conflicting viewpoints. So, as an atheist, I strive to co-exist with people of religious faith (theists). I’ve said before that the ‘goodness’ of a person is based entirely on the actions of the individual and that it’s unfair to judge a whole group based on the actions of one extremist. As an example; I don’t believe that all Christians are like the Westboro Baptist Church, whose hateful protests are generally regarded as immoral.

Having said this, I do believe that religion, as a mechanism, poses a threat to humanity. Before I go on, however, I do want to acknowledge that there are good aspects to religion. Particularly, the humanitarian efforts and the comfort it provides in regards to death. This is not a blanket anti-religion article. Rather, it’s going to focus on a very specific part. This faulty cog, however, runs the risk of bringing down the whole machine.

By this, I don’t mean that anyone who believes in god is crazy. In fact, I would say that average theists are well adjusted individuals. Rather, I’m thinking of people who take things to the extreme. If a man is standing on the street outside your house, shouting about aliens invading his brain, your first inclination would probably be to call the cops. You would think that he isn’t in his right mind and, because he could be a danger, should have some kind of special help. What this crazy guy on your street is yelling about can vary from subject to subject. Maybe it’s bigfoot or a chip that the government put in his brain. But, the point is that there are certain ‘crazy’ things that he could say that would make you worried for the safety of your family.

Now, imagine that this same man is shouting about the Lord Jesus Christ and how we must believe he died for our sins in order to save our souls. A few of us might still call the cops (because he’s standing in our street) but I do believe there is a general reduction in the perception of danger. One might think, 'oh he’s just one of those really religious guys', as opposed to ‘man that guy is crazy’. Religion, and it’s mode of thinking, has become ‘normal’ in the modern world. We see someone wearing a cross necklace, or reading the bible and we don’t think anything of it. And, while nine times out of ten, those people are completely harmless, what about the tenth guy shouting in the street? Is he also harmless? Or do we just perceive him as harmless because we’ve come to accept this specific brand of ranting? I said above that all religious people can’t be judged by the actions of the extremists, but does religion protect these extremists? Does it give them an environment where they are sheltered from help until it’s too late? 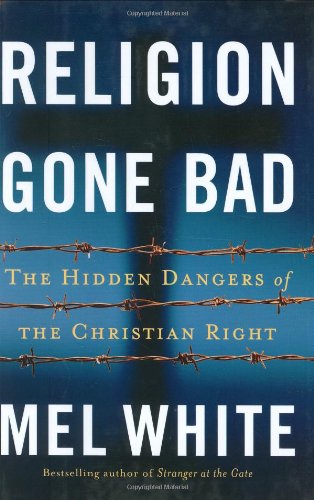 Faith bleeds into things where it doesn’t belong.

I think all of us are familiar with political crazies. Two completely sensible people (a liberal and a conservative) might debate the importance of budget cuts in one corner, while a third on the other side of the room screams about how the president is secretly a Muslim terrorist. It’s true that powerful outlets work very hard to spread false information and smear campaigns, but there are many people who still believe a lie after it is debunked. When asked why, they tend to answer that it’s a feeling in their gut. I would also argue that most, if not all, of these political extremists are religious in some fashion. The reason is because these people are taught, by religion, that believing something based on faith, rather than evidence, is an entirely valid way to run one’s life.

Since religion is handled delicately in modern culture, whether it’s on television or in person, a certain amount of weight has been given to the ‘faith’ side of the philosophical debate. In other words, by saying that belief without evidence is okay, certain individuals use it to believe other things, completely unrelated to religion. Such as; the president is a Muslim terrorist. When we base things, other than religion, on faith, the fabric of civilized society starts to come undone. If the only basis for truth is a ‘gut feeling’, then an overwhelming amount of different ‘truths’ decay the concept until nothing is true. And, with enough momentum, wars could be waged on what was believed to happen, rather than what actually did. It’s the same reason we don’t jump off a cliff without a parachute. Sensible people know that gravity will drop you to the bottom, where the impact will kill you. But, if everyone starts believing gravity is a conspiracy by scientists and we must faithfully leap over the edge, then reality devolves into paranoid violence.

This road leads to ‘crushing’ the nonbelievers.

My biggest fear, as an atheist, is that I’ll come in contact with one of the religious extremists and they’ll put a bullet in my chest, just because I don’t believe in god. I don’t know if that’s an irrational fear or not, but having seen the lengths to which religious extremists go, I don’t think it’s entirely unwarranted. However, a direct assault isn’t the only way in which the religious might try to defeat the nonbelievers.

I mentioned politics above because it seems to be hopelessly tied to religion. Atheist candidates are completely untrustworthy, or barred from running, and religious legislation tries, every day, to make its way into law. The reasoning behind each of these religious laws, whether it’s about gay marriage, abortion or something else, varies from case to case, but the end result is the same. A law in the United Sates is conceived and implemented based on a religious belief. Other than the fact that the U.S. has a separation of church and state built into its foundation, this represents religious efforts to force nonbelievers into a very specific way of living. A theist might respond that, by allowing gay marriage and abortion, it forces the religious to live by the laws of the non-religious. However, the difference is that a person who doesn’t approve of those things can continue to disapprove of them and (in those specific cases) not participate in them. Where as a nonbeliever is forced to participate in a law that restricts one action or another.

The way we think affects the way we act.

There is a quote from the debate between Bill Nye and Ken Ham, regarding creationism, wherein the question was asked what it would take to change each of their minds on the subject. I’m paraphrasing, but in essence Bill Nye (the scientist) said that evidence would change his mind. Ken Ham (the theist) said that nothing would change his mind. What I find interesting about this is that Bill Nye is not ruling out god, he is merely suggesting that evidence doesn’t support him. Should evidence of god materialize, he would believe. On the opposite side, Ken Ham suggests that, even if god were definitively disproven, he still wouldn’t believe it. Never mind that god will probably never be proven one way or another, what strikes me is the vastly different ways of thinking between these two men. The life of a human is constantly fraught with changes, decisions and critical thinking. Sometimes we make decisions that, in retrospect, we agonize over for years. But, the human experience is based on learning. As children we learn to walk, talk, feed ourselves and go to the bathroom, among other things. We adapt to the ever changing world around us until we no longer need the help of our parents. This adaptation, however, never stops. Closing one’s mind to other possibilities can be damaging for the individual and dangerous when applied to a group. We cannot assign rigid ways of thinking to a dynamic world.

Richard Dawkins once said “I am against religion because it teaches us to be satisfied with not understanding the world.” Religion isn’t necessarily a problem because of what it preaches, but rather, what it inhibits. Whether it’s protecting those with mental illnesses, bleeding faith into the wrong parts of life, or legislating the non-believers into submission. In order to move forward, humans need to universally acknowledge the weight of reality. Customs, outreach and comfort can all remain at the core of religion, but if we continue to turn a blind eye to the outlandish and dangerous pieces of it, then we are all guilty of its repercussions.