The Real Story Behind the Dibbuk Box

The Possession, a movie that was just recently released into theaters, focuses on an object known as a Dibbuk Box. The Dibbuk Box is a wine cabinet that is said to be haunted by a dybbuk, a malevolent spirit from Jewish folklore that enters the bodies of living people. In fact, the term, Dybbuk comes from the Hebrew word for adhere or cling.

However, there is also a real-life Dibbuk Box. The story, which the movie was loosely based off of, began in 2001 when Kevin Mannis, who ran an antiques business, purchased the box from a neighborhood estate sale. He learned from the host of the sale that it had belonged to her grandmother, who had also been the only member of her family to survive the German Holocaust. She, along with some other prisoners, managed to escape from the Nazi concentration camp they were sent to and were successfully able to make their way to Spain. It was in this country that she acquired the Dibbuk Box before she immigrated to the United States. The host told Mannis that when she asked her grandmother about the box, she was warned to never open it. Seeing how sentimental the box seemed to be to her grandmother, he offered to return it to her, but she became very upset and refused to take it.

When Mannis opened the box, he found two pennies from the 1920s, a small granite statue with the Hebrew word, 'Shalom' engraved into it, two locks of hair that were each bound with a cord, a dried rosebud, a candlestick, and a wine goblet.

Inside the Dibbuk Box

The book by Jason Haxton 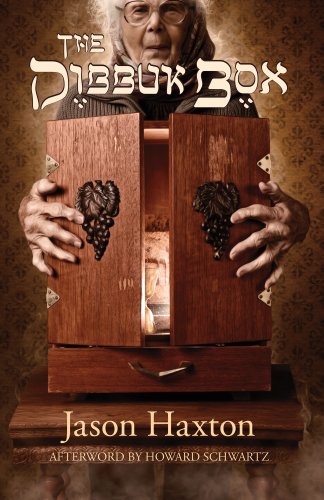 The box began to cause him trouble only a half hour after arriving with it to his business. He placed it in the basement of the building and left to do some errands, leaving an employee inside the store by herself. Not too long afterward, he received a hysterical call from her on his cell phone. She told him that someone was inside the room with her and was breaking light bulbs and swearing. She also said that the intruder locked the security gates and emergency exit so she wasn't able to escape. However, when he arrived, he didn't find an intruder but saw that all the light bulbs in the store were broken, including the ones that were in their sockets. Needless to say, the employee never returned.

He decided to give the box to his mother as a birthday present. She seemed to like it, but only about five minutes afterward she suffered from a stroke. After the incident, she no longer wanted the box because she felt it was evil. Moreover, on the same day his mother had the stroke the FBI raided his shop without any explanation, and he lost the lease to it. He also became the victim of identity theft.

Mannis then gave the box to a number of people: first to his sister, then to his brother and his wife, then to his girlfriend, and finally to a middle-aged couple, but neither of them kept it for long. He eventually had no choice but to keep the box in his home. That is when he began to have a bizarre recurring nightmare, which he described like this: "I find myself walking with a friend, usually someone I know well and trust at some point in the dream, I find myself looking into the eyes of the person that I am with. It is then that I realize that there is something different, something evil looking back at me. At that point in my dream, the person I am with changes into what can only be described as the most gruesome, demonic looking Hag that I have ever seen. This Hag proceeds then, to beat the living tar out of me." Creepier still, when he awoke he would find unexplained markings and bruises on him where he had been hit by the hag in the dream. He also found out that his sister, his brother and his wife, and his girlfriend all had had the same nightmare when they had the box.

Furthermore, Mannis (as well as numerous guests to his home) began to see shadow figures out of the corners of their eyes. Everyone who had had the box also reported that it either smelled of Jasmine flowers or of cat urine. Finally, Mannis couldn't take it anymore and auctioned the box on eBay (You can still see the original post here). It was sold to Iosif Nietzke, who had begun to experience bad luck of his own, including unexplained electrical problems in his home and his hair falling out- even though he was only in his early twenties and was in perfect health. Once again, Nietzke put the box up for sale on eBay, and it went to university museum curator, Jason Haxton, who is still the owner of it. Haxton reported contracting a host of health problems after being in possession of the box, including hives, welts that spread all throughout his body, frequent nasal congestion, and coughing up blood. He eventually wrote the book entitled The Dibbuk Box .

The Sci-Fi channel series, Paranormal Witness, also released an episode about the box.

What are your thoughts on the Dibbuk Box?