Now the serpent was more crafty than any of the wild animals the LORD God had made. He said to the woman, "Did God really say, 'You must not eat from any tree in the garden'?"

"You will not surely die," the serpent said to the woman. "For God knows that when you eat of it your eyes will be opened, and you will be like God, knowing good and evil."

One of the things I've noticed recently is the increase in Satanic 'chatter' amongst non believers, it's obvious it will start happening, as we move into the final plays in this end game.

The wireless interceptors heard the same thing happening just before the Japanese were enticed to attack Pearl Harbour, starting Americas involvement with WW2.

In the film, Dan Ackroyd is shown trying to warn his superiors, to no avail, because they either refused to believe it could happen, or knew that it was supposed to happen.

The principal objective of all this Satanic whispering is to attempt to discredit the bible, scripture in general, Christianity in particular and God as a concept.

The detractors all specialise in trying to cast doubt on whatever the bible or believers say, write or otherwise communicate.

The main 'whisperers' on the forums have been programmed to attack either in formation or as lone rangers, they have varied talents.... all claim a knowledge of the bible and a rejection of it's contents, all claim to have found a better way of achieving self knowledge and to have freed themselves from religion.

Indeed they are very similar in most respects, but crafted to appeal to different sections of the audience.

Satan is indeed a devious and masterful deceiver, and that's the main thing they share, they are all equally spurred into vehement opposition to any suggestion that they are actually examples of Satan's puppetry.

There is nothing new in this, indeed it was the start of the whole scenario, when Satan first mouthed those words; "Did God really say that....?"

The great aim for Satan, the real victory for him, comes from causing a rift between God and mankind, any old rift will do, size matters not a jot, for Satan knows that as soon as he gets one little chink into someone's relationship with God, he has the ability and opportunity to widen it ever so slowly (and sometimes quickly) into a chasm that deceives the poor sap who's fallen for Satans dupe, into believing that they cannot get back to God.

I know, it's happened to me.

From the time I started my walk with Christ, I have had a running battle with my former master, Satan, who's a bad loser as well.

During the first years I fought one handed, with the other holding my trusty KJV bible open to learn new techniques and my spirit open in prayer to receive fresh commands to action.

As in all constant practise one improves and it's fair to say that I got to a point where there were more productive areas for Satan's demons to try and operate.

Anytime Satan sees that you are being driven NEARER to God by his actions, he backs off. So if you find yourself under attack, get closer to God and say thank you to the enemy for bringing you closer.

He hates that! (and a few minion demons probably get flattened for failing with you)

But Satan has patience, for he knows that if he watches long enough, we will offer him new opportunities, for there is nothing like a self righteously secure believer for arousing Satan's interest, in the redeemed sinner.

He may lose his claim over our soul, but that does not stop him trying to make our lives a living hell whilst we walk the earth.

So Satan uses guilt to attack us, for we are invariably guilty of something, and unfortunately often unrepentant about our guilt.

We naively believe that if we ignore the guilty feelings they will go away, which is true, for as our conscience gets seared we become more immune to a guilty conscience, even declaring that there is no reason to feel guilty.

Self justification becomes our expertise.

"Do as you will is the extent of the law"

"Do as you will but do no harm"

So if your introspective thinking has led you to believe that your self awareness is all important and will make you a better person, who are you nearer to in the above statements?

The really subtle part about Satan's deception is that you just cannot see it.

When I was full on with the evil one, I was very successful, my wit and humour was sparkling and I really thought I was THE man.

Satan will give you intellectual knowledge, wealth and power without you ever questioning where those attributes came from.

One reads all the time of self made men, I don't decry their hard work and endeavour, but many of those men are not actually self made, they are just made without acknowledgement of how God has provided their talents, they truly believe that THEY made it all happen.

They never question where the power came from.

I started looking within when I was 11 and could not figure out how I'd been stuck with the parents I had, the freezing cold house and the boring existence I was living.

My mental wall read 'Think Why' and I condescendingly labelled all other 'ordinary' folk as having 'Why Think' on their walls.

A swift read through Orwell, Ayn Rand, Huxley and the other intellectual luvvies, left me convinced of my inherent superiority.

I had missed though the acceptance I had made, of a familiar spirit when I was eleven, and which had affected my life radically from that time.

I neglected it because it WAS a familiar spirit.

Called that because you become so familiar with them speaking in your ear and guiding your life that you forget that you are being controlled.

Indeed if they are found out, they are in deep trouble with their spiritual masters, for if YOU awaken to that fact, you will prbably get annoyed at Satans kingdom (like I did), defect and volunteer to stand as a soldier in Gods Kingdom.

Not the Crusader type of soldier, who was a misled soul fighting in the flesh.....but a spiritual warrior, working on earth to fight in the spirit realm.

Believe it or not, my last rune stone reading, and my last tarot card lay both told me that; "The old must pass and the new must replace it, for a spiritual warrior to come forward"...

Satan can be very subtle and innocuous, his aim is to find that chink, which is all he needs. 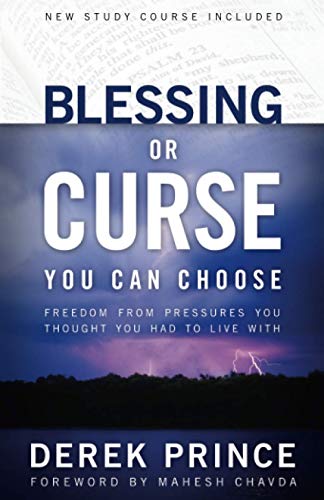 Blessing or Curse: You Can Choose
Buy Now

And they which heard it, being convicted by their own conscience, went out one by one, beginning at the eldest, even unto the last: and Jesus was left alone, and the woman standing in the midst.

Lest Satan should get an advantage of us : for we are not ignorant of his devices.

But I say unto you, That every idle word that men shall speak , they shall give account in the day of judgement.

Then certain of the scribes and of the Pharisees answered , saying , Master, we would see a sign from thee.

But he answered and said unto them, An evil and adulterous generation seeketh after a sign; and there shall no sign be given to it, but the sign of the prophet Jonas:

God does not give us guilt, ALL guilt comes from Satan.

When the Holy Spirit convicts you, you realise and accept that you have erred and repent to God, make restitution as best possible for the error and learn from the mistake.

Or you just keep doing it and then God will have no option but to allow Satan to give you a feeling of guilt.

Satan likes guilt, it makes folk stay clear of Gods mercy and grace, they feel guilty and unworthy, so like Adam & Eve (secular humanity) they try to hide their sin from God.

If you repent, God will forgive you.

If you give the authority in your life/sin over to God, He will stop you from sinning...for as long as you leave your life authority with God.

Most take it back when Satan whispers "Did God really say that?"

I hear Satan whisperers a whole lot on these forums....

Eventually, when you have chosen guilt over conviction, avoiding God over repentance, God will have no option (Satan knows the bible better than you, he's the prime legalist) but to allow Satan to have his way with you, for you will have created a solid perch for Satan to sit on your shoulders and peck away at your self worth, God consciousness, and relationship with God.

The you turn your back on God, maybe even start saying to others..."Did God really say that?"

At that point Satan turns your guilt into bravado and gets you to believe that you no longer feel guilty, and gets you saying much more..."Did God really say that?"

.....and hey presto! you believe you are a free man or woman who does not need any puny god to tell you how to run your life.....

....and Satan sniggers in the corner and slides out of the room with a happy smile upon his beautific face.

Will people continue being Satan Whisperers, will we always be hearing.......