William Tyndale and the Tyndale Bible

Shelly Bryant divides her year between Shanghai and Singapore, working as a writer, researcher, and translator.

William Tyndale (c.1494-1536) was one of England's early church reformers.  The repercussions of his translation work in 1525-26 were long-lasting in England, stretching across at least a century, stirred on further by the religious intolerance of his day.  Tyndale was committed to developing a translation of the Bible that was easy to read, even allowing "the boy who plows the field" to understand the holy scriptures for himself.  In this lifelong desire of Tyndale's there is an underlying belief in the responsibility of every Christian to seek  a personal understanding of his or her faith, rather than relying on a faith mediated through the clergy.  In the preface to his translation, he states that experience had led him to the conviction that people would be able to develop depth of faith only if they were able to read the scriptures in their mother tongue.  It was to this end that he committed his life work.

Tyndale lived in a time when the 1408 ban on translations in "the vulgar tongue" was still in place, and throughout his lifetime, he worked in the face of official opposition.  His English version of the Bible was banned in his home country, and had to be printed in Europe and then smuggled back into England.  This did not deter Tyndale from continuing his translation work, and he was eventually imprisoned in Antwerp for his insistence on continuing with his mission.  In 1536, he was executed.  His last words were, "Lord, open the King of England's eyes."

Tyndale's translation of the Bible aims to speak to the common people in their own language. Its text is presented in a colloquial style, easily understood by his contemporaries. Very few new words were coined for the development of the Tyndale translation. Rather, it employs mostly words, phrasing, and expression that was familiar to Tyndale's contemporaries. 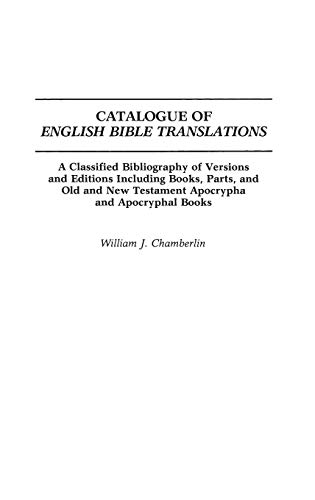 Catalogue of English Bible Translations: A Classified Bibliography of Versions and Editions Including Books, Parts, and Old and New Testament ... and Indexes in Religious Studies)
Buy Now