Located in a tranquil countryside of Aluva in Ernakulam District of the state of Kerala, this temple of Lord Shiva and Parvati attracts numerous devotees each year. Though Lord Shiva and Parvati are placed in the same Mandapa (sanctum) facing opposite sides, Parvati’s sanctum is open for worship only during 12 days in a year starting from the day of Thiruvathira that is Siva’s birthday. This festive period is termed as ‘Nadathurapu Mahotsavam’ in the regional language, Malayalam. The Nada (sanctum) is closed afterwards throughout the year due to a belief based on a legend.

The Brahmin cried to Lord Mahadeva that he had grown too old to come and see him after his prayers at the temple. As he started his way back home, he lifted his Olakuda (an umbrella made of palm leaf), and found it extraordinarily heavier. He told Akavoor Chathan about this incident, but Akavoor did not utter a word. Akavoor knew that it was Lord Mahadeva who got inside the umberella to give 'darshan' to the Brahmin always.

The legend behind Thiruvairanikulam temple

The temple’s existence is based on a popular legend shared by the nearby Akavoor Mana. Akavoor Manaparambu (the land of Akavur Mana) is situated in the Airanikulam village. Brahmins of the Mana were the rulers during that period. Years later, a conflict erupted in the family enforced a section of them to move to Vellarapilly village. But the Brahmins kept on visiting Sree Mahadeva, called as Airanikulathappan. During this period, Akavoor Chathan, one among the twelve sons of 'Parayi', often heard in the ancestral folklore, came to the Mana as a dependent.

Seeing one of the Brahmins visiting Sree Mahadeva's Temple, Akavoor Chathan built a boat of granite to transport him through the river to the temple. The Brahmin grew old as years passed by. One day, he cried to Lord Mahadeva that he had grown too old to come and see him after his prayers at the temple. As he started his way back home, he lifted his Olakuda (an umbrella made of palm leaf), and found it extraordinarily heavier. He told Akavoor Chathan about this incident, but Akavoor did not utter a word. While travelling on the boat, the Brahmin had an intuitive call of nature and Akavoor Chathan rowed the boat to a nearby land soon.

Then he took his umbrella that had become very light to his surprise. Akavoor asked the Brahmin not to worry about it. Upon reaching the Manakkal land, the Brahmin alighted the boat and Akavoor Chathan overturned the boat that rested in the mud. The granite stone can be seen even today in that side of the river popularly known as Chathan Stone. Akavoor believed that it was Lord Mahadeva itself who had got inside the umberella to give 'darshan' to the Brahmin always. This legend is behind the Thiruvairanikulam temple situated in this place.

There is another legend surrounding the shutting of Goddess Parvati’s Sreekovil(sanctum). The priest of this temple used to make the Prasad (sacrament) for the devotees himself in the temple kitchen. One day someone peeped inside the kitchen to see how he was making that. Instead of the priest, he saw Parvati devi herself preparing it to his surprise. She became angry after this incident and declared that she would appear on Thiruvathira day and would be present just for 12 days. Rest of the days, her Nada would remain closed.

Women flock here to get a ‘darshan’ of Parvati devi during these days starting from the day of Thiruvathira. It is said that she may pour blessings upon unmarried women to become married soon. Married women pray to her for the well-being of their husbands.

The tranquil location of Thiruvairanikulam temple gifts a blissful sensation to all the devotees who reach here. The road to reach here, especially the legendary Vallom road gives the touch of God’s presence.

Have you visited Thiruvairanikkulam temple?

A song on Thiruvairanikkulam temple 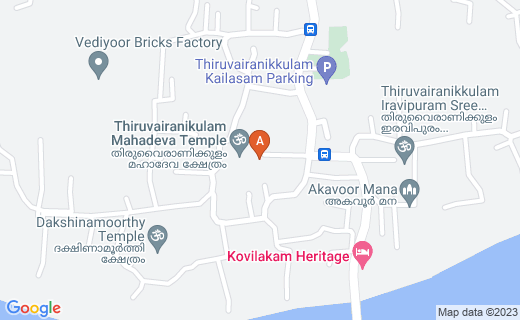