The Entrance on the New South Wales Central Coast is one of Australia's most sought after holiday destinations, but according to many locals, not every visitor is a paying customer. In the second week of January, on at least three occasions over a ten year period, the owner of a waterfront guest house witnessed spectral visitors arrive at his establishment and go about their business as if on holidays.

On each occasion, the proprietor would arise in the early hours of the morning to be greeted by several spirits drifting barefoot down the long hallway of the guest house. As he watched in awe, the mysterious visitors would glide past the doors of the unsuspecting guests located on either side of the hall and disappear into the kitchen at the end of the passageway.

After witnessing this for two days, the proprietor summoned all his courage and followed the ghostly visitors down the hall - pressing his ear against the kitchen door, he listened.

He instantly heard the distinct voices of two males and one female conversing quietly about fishing. They rambled on about the size of their catch and the one that got away. Then came the gentle stoking of the fuel stove; mixed with the sounds of merriment and the metallic clinking of tankards.

In a state of shock mixed with an overpowering curiosity, the owner pushed the door open.

A huge gust of wind immediately flew down the chimney creating a cloud of soot and ash that smothered his face, temporarily blinding him. He had only a brief glimpse of the three smoke-like figures evaporating into the soot choked room.

Years later when the guest house was demolished, three silver tankards and two wine-skins dated 1885 were found at the bottom of a huge well on the property.

It is thought the ghosts may have been those of the Taylor family who pioneered the district in 1885. During their time they built several guest houses for the enjoyment of the many families that visited the Coast on holidays

Having worked tirelessly for the recreation of others, it seems the Taylor family may have finally enjoyed a holiday of their own.

Ghost Hunting: How to Investigate the Paranormal
Buy Now 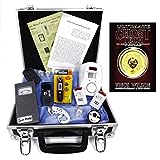