They Sure Shouldn't Be!

This is my answer to the question, "Why are divorces as prevalent in Christian marriages as in secular marriages?"

Cloverleaffarm has given the answer, although not quite the way I think she is trying to...

Christians don't take marriage seriously anymore. You're right, the church is no different from the outside world, where half of all marriages end in divorce. And often, it's not that fifty percent of all couples get divorced, it's that if a person has been divorced once they are more likely to do it again.

I don't want to belittle the fact that cheating, lying and abuse DO happen in Christian marriages, and sometimes divorce needs to happen. But if the church (and here I'm not talking just about church leaders, I'm also talking about those who sit in the pews) took their role as Christ's representatives here on Earth more seriously, if they took their God more seriously, most of this stuff wouldn't happen.

Once upon a time marriage was looked upon as a sacred commitment, handed down from God at Creation. There have always been scoundrels, there have always been unfaithful spouses. There have been periods in different histories when cheating was considered "normal" and you were outside the fold if you were faithful to your spouse. But even when that was considered desirable, it was usually restricted to the "upper classes," the royalty and the artists. The common people, the working class, they understood that when you committed to something, that your word was supposed to mean something! Nowadays, we have "Christian" artists and others within the church complaining that there is "no support" for divorced people, yet half the church is divorced!

It's all supposed to start with the Bible. Genesis 2:23-24, " "This is now bone of my bones and flesh of my flesh; she shall be called 'woman,' for she was taken out of man." For this reason a man will leave his father and be united to his wife, and they will become one flesh." (NIV) This verse was the reason so many wedding ceremonies would end with the preacher or the priest intoning, "What God has brought together, let man not separate." Many ceremonies still do.

Again, Malachi 2:16, "For I hate sending away, said Jehovah, God of Israel, And He who hath covered violence with his clothing, said Jehovah of Hosts, And ye have been watchful over your spirit, And ye do not deal treacherously." (Young's Literal Translation) The "sending away" was divorce, for it says in another translation, "15 Has not the one God made you? You belong to him in body and spirit. And what does the one God seek? Godly offspring. So be on your guard, and do not be unfaithful to the wife of your youth. 16 “The man who hates and divorces his wife,” says the LORD, the God of Israel, “does violence to the one he should protect,” says the LORD Almighty. So be on your guard, and do not be unfaithful." (Malachi 2:15-16, NIV)

Jesus Himself reinforced this when He said, " 4 “Haven’t you read,” he replied, “that at the beginning the Creator ‘made them male and female,’ 5 and said, ‘For this reason a man will leave his father and mother and be united to his wife, and the two will become one flesh’? 6 So they are no longer two, but one flesh. Therefore what God has joined together, let no one separate.” (Matthew 19:4-6, NIV) He said in other places that a man who divorces his wife commits adultery and that a woman who divorces her husband, except for marital infidelity, commits adultery as well. He clarified that it was not God, but Moses, who allowed divorce and he did so because men have hard hearts.

The church does not take it's role as Christ's bride seriously anymore. There are individual churches here and there, and individuals within other churches, who take it seriously, or at least try to. But calling yourself a Christian is still considered a respectable thing to do by many people, and Christianity has become too easy and casual for many people. "It is a dreadful thing to fall into the hands of the living God." (Hebrews 10:31, NIV) But many believers don't act this way.

Men need to take our roles as men more seriously. It's difficult to do in today's society, the role models are hard to find. Blessed is the man, whether or not he is a believer or comes from a believing household, who has someone who can teach him patience, trust, kindness, honesty, love and justice. Blessed are his children when he displays those traits. And blessed is everyone when he can teach his children to display those traits as well.

There is one point that I'm sure will be brought up and needs to be addressed. Does an enforcement of these rules lead to a repressive, patriarchal society? Do women get the short end of the stick in these situations?

Not if the men are taking their roles as protectors and providers seriously. Not if the men are taking the fact that they will be accountable to their God seriously. And not if men take the fact that what their children see today they will do tomorrow seriously. And those children will be accountable to God, and those fathers will be accountable to God for those children, and their wives. A good marriage takes work, there are no fairy tales. And mutual trust and respect are essential, but so is being trustworthy and respectful. That goes for both the husband and the wife. And when the church stops taking it seriously, the world will conform the church to it, not the other way around. Every time.

I can think of no sadder commentary on the American church than that divorce is just as prevalent inside the church as it is outside. But it was not this way from the beginning.

Many thanks to Biblegateway.com, from where I pulled the Biblical quotes

What do you think about divorce being as prevalent inside the church as outside? 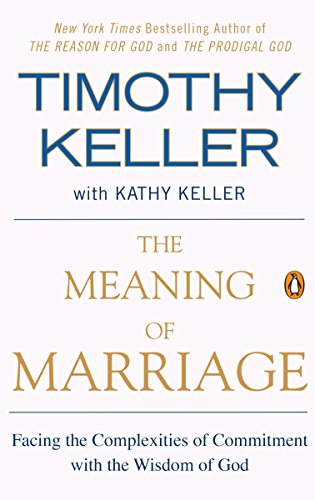 The Meaning of Marriage: Facing the Complexities of Commitment with the Wisdom of God
Buy Now