Highgate Cemetery is a burial ground in London that dates back to 1839, and was dedicated to burying the dead of elite families. The reason the cemetery was dedicated to London’s elite was due to the exotic landscape design and stunning architecture; 15 acres was dedicated to members of the Church of England and 2 acres was dedicated to people who did not belong to the church. The very first person to be buried in the cemetery was on May 26, 1839, and was a 36 year old woman by the name of Elizabeth Jackson. In 1854, the cemetery gained an additional twenty acres due to economic prosper, and it was connected to the existing acreage by an underground tunnel system. Highgate cemetery boasts elaborate and eccentric architecture, with buildings and catacombs built in a range of styles that include New Classical, Gothic and Tudor. In addition to laying to rest many elite English families next to beautifully haunting above and below ground tomb markers, the cemetery is perhaps most famous as housing the burial plot of philosopher Karl Marx, who died in 1883. The gates to the cemetery closed in 1975 due to bankruptcy, however a society so named ‘The Friends of Highgate Cemetery’ was created in order to preserve the cemetery for those families who maintain grave ownership. Extensive conservation and restoration work has been undergone on the cemetery, and it is currently open as both a functional burial ground and popular tourist destination.

The case of the Highgate Vampire is perhaps one of the most commonly known series of Vampire sightings known today. Going far beyond simple hunches or ghost stories, the British Psychic and Occult Society were involved so over their heads with reports of Vampire activity within the cemetery that a society specifically dedicated to the Highgate Vampire sightings was created, known today as The Highgate Vampire Society. The sightings began in the 1960’s, when a number of people began reporting seeing a tall dark figure with ‘hypnotic red eyes’. There were even reports of people being attacked by said creature, however when an investigation into the matter began, the sightings seem to have stopped. The case quickly picked up momentum again when a report was made in the 1970’s of a girl who was attacked in the cemetery and brought to hospital. Her account of the attack suggested that her attacker was a tall hooded figure with glowing eyes. Tales of sightings and the sense of a watchful presence continue today, and there are those who swear by their experiences that Highgate Cemetery is indeed home to a Vampire presence. Could this Vampire be Miss Elizabeth Jackson, the first person buried in the cemetery, or perhaps is it a caretaker that is keeping a watchful eye on the land? The identity is unknown, and the mystery continues. 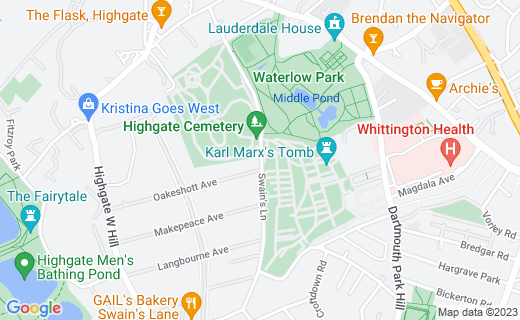