What Ever You Bind on Earth...

I remember as a boy my mother would drag us to Church on Sunday morning, whenever she didn't work, and I would sit there, after the music and the choir sang of course. I always liked the choir. There was something that confused me though, I never mentioned it to anyone. I would hear people in the Church say things like, " I bind you Satan, in the name of Jesus." That sounded very odd to me. But we didn't go to Church often, my father was sick, in and out of the hospital, and my mom worked many times seven days as an elevator operator downtown in Goldblatts Department store, so our going to Church on Sunday mornings were far and few in between.

When I accepted Jesus Christ in my life many years later I was still hearing this same ' I bind you satan .... ' phrase. I decided to check it, in-depth, myself. This is what I found:

According to "VINES" Complete Expository Dictionary of Old and New Testament Words the word 'Bind' comes from the word 'Asar'. This word is a common 'Semitic' term, found in both ancient Akkadian and Ugaritic, as well as throughout the history of the Hebrew language. The common word for 'tying up' for security and safety, Asar is often used to indicate the tying up of donkeys ( 2 Kings 7:10). Used in an abstract sense, Asar refers to those who are spiritually 'bound' (Psalm 146:7; Isaiah 49:9; 61:1), or a man who is emotionally captivated by a woman's hair (Song of Solomon 7:5). Strangely, the figurative use of the term in the sense of obligation or 'binding' to a vow or an oath is found 'only' in Numbers 30 but is used there a number of times. 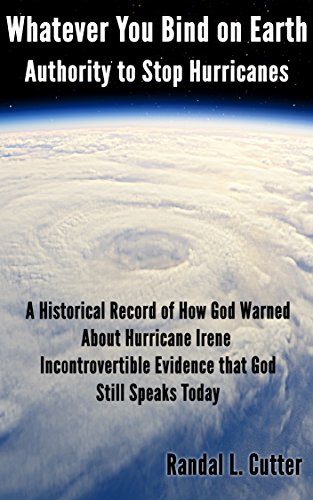 Whatever You Bind On Earth: Authority To Stop Hurricanes
Buy Now

Binding and loosing - describe the concept that the Church has the authority and means to announce that sin was condemned or forgiven. The Keys to the Kingdom given to Peter was a symbol in locking or unlocking sins and illustrate his authority in binding or loosing (Matthew 16:19). Later (Matthew 18:18) the same authority was given to the Apostles and the Church as a whole. It is not an exclusive gift to any one person or local Church.

Binding and loosing are determined by the hearers' response.

Wayne Grudem writes in his book, 'Systematic Theology, An Introduction To Biblical Doctrine, "But is there any other authority, in addition to this, that Jesus implies by the phrase 'the keys of the kingdom of heaven? There are two factors suggesting that the authority of the keys here also includes the authority to exercise discipline within the church: (1) The plural "keys" suggests authority over more than one door. Thus, more than simply entrance into the kingdom is implied; some authority within the kingdoms is also suggested. (2) Jesus completes the promise about the keys with a statement about "binding" and "loosing," which closely parallels another saying of his in Matthew 18, in which "binding" and "loosing" means placing under church discipline and releasing from church discipline:

After further review of this scripture in the book of Matthew, we see that "keys" are plural and represent more than just entering the kingdom or church. It also includes what happens once you're in.

Wayne Grudem further says in his book, 'Systematic Theology, An Introduction To Biblical Doctrine, "Moreover, this teaching on the power of the keys has a significant application to individual Christians who begin to be subject to the discipline of a true church: Christians should submit to this discipline and not run from it, because God himself has also put them under discipline for that sin".