Walking with the Ghosts in Edinburgh's South Bridge Vaults

Is This a Real Ghost Picture? - Can You See a Woman and Child?

Can you see Edinburgh's Ghosts?

Can you see anything in the Hub's first picture?

I recently went on an underground tour of the South Bridge Vaults in Edinburgh, reputed to be one of the most haunted places in Scotland.

They are are damp, dark and very cold. However, it wasn't the plummeting air temperature that chilled our blood, it was the unfolding tales of their dark and tragic past.

The Black Door with the High Step leading in 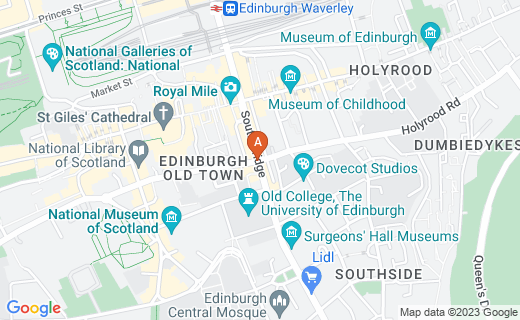 The Atmosphere is very Oppressive

Edinburgh was a growing, vibrant city back in the late 18th Century and the need for progression was met by an ambitious engineering plan.

The South Bridge was built as Edinburgh's first planned, shop lined street. The actual bridge consisted of nineteen arches with eighteen of those arches enveloped in tenement buildings and the Cowgate arch left visible. Those hidden arches were given floors so that all the space could be utilised by businesses; over one hundred vaults were created.

The bridge opened in 1788 and once it was open people quickly realised that the vaults were not suitable to be used as storage facilities.

Back in the 18th Century there was no sanitation and the population's human waste was thrown out in the street. Due to the positioning of the South Bridge the sewage ran downhill towards it. When the South Bridge had been constructed the work had been completed very quickly, so quickly in fact that they had failed to make it watertight. The rain, the damp and off course the human waste seeped right through the ceilings of the vaults and tainted the merchant's stock. Less than ten years after moving in, the merchants began to leave the Vaults.

Back at that time the Cowgate in Edinburgh was regarded as a notorious slum area filled with vagabonds and undesirables. When the Vaults became vacant it was an open invitation for continuing unsavoury practices outwith the reach of the law or the tax office.

Soon they were filled with illegal businesses ranging from illicit stills, taverns and brothels. Conditions were atrocious with overcrowding, disease and crime running unchecked. The ceilings still dripped raw sewage down onto the occupants and anyone who went to live there was regarded as homeless and would then be arrested and punished if they went to the surface again.

There are no records detailing when they were cleared out and blocked up, although it is believed to be sometime in the 1800's.

The rediscovery of the Vaults was not until the 1980s and nowadays they are used to conduct historical tours and ghost hunts.

An Orb in the South Bridge Vaults?

Embarking on our Tour

We were taken by our tour guide into a black doorway, led up a flight of stairs and into an old building. She warned us of the impending dangers of slippery floors, near darkness and not to leave her side. By this point the group were waiting and feeling a little apprehensive as we faced the doorway leading in.

The Vaults in Edinburgh

Would You Venture In?

When We Walked In

Upon walking in the first thing you notice is the bitter cold and the black stained walls. The stone is badly discoloured and the ceilings perpetually drip water. Water lies on the stone floors which makes them very slippy and you need to be really careful when walking. Black areas hang down from the ceiling creating a very oppressive atmosphere and it all adds to the feeling that you have stepped into somewhere that maybe you shouldn't have.

It is creepy, you do feel unsettled and you are constantly looking around in case there is something frightening near you.

The guide took us around a number of rooms and within each room there was a story relayed. As we walked, we heard more and more of the grisly past; our nerves became raw and our senses moved to high alert.

A tragic tale of how many lives had been lost in one room due to the Great Fire of Edinburgh was told. This room felt very oppressive and for me it was the most uncomfortable out of all the vaults.

Whilst standing in what had previously been a tavern, we heard a really sad story of a mother and son whose lives were taken from them unfairly after they had tried to bring to justice, a man who had wronged them.

There were some other rooms as well including one where a stone circle has been built to try to contain a dark energy which is in the vaults. This room has apparently had past reported cases of scratches appearing after visiting it.

Does Edinburgh Really Have Ghosts? You Decide...

A few different companies run tours, offering various options and time lengths. We chose Auld Reekie tours and we all found the guide to be helpful, informative and a very good narrator.

Auld Reekie run daily tours between the hours of 12.00 and 22.00pm. The tours range from Underground Tours to Terror Tours, for the fearless. The tours need to be booked through their ticket office and the meeting point for all the tours is the Tron Kirk on the Royal Mile.

More Orbs in the Pictures?

The tour was really interesting and the tour guide done a good job of bringing the history to life.

The atmosphere is unpleasant with the damp hanging from the ceiling and climbing up the walls. Listening to the macabre tales of it's turbulent past whilst standing in the darkness would put a chill into the heart of the very bravest of us.

When the tour is finished and you want to warm up and move onto nicer surroundings, there are so many excellent restaurants and bars near to the vaults that you will be spoiled for choice. So find somewhere comfy, order a drink and compare notes with your friends on your walk through Edinburgh's dark history.

I really enjoyed the tour and I find the history aspect fascinating, although also very sad.

As for the ghosts? The picture at the start of this hub raised a few questions in my mind; you must all decide for yourselves, do you believe in ghosts?

My Rating of the South Bridge Vaults in Edinburgh

Would you Venture into the Vaults?

Would you walk around in Edinburgh's South Bridge Vaults?

Walking Into the Darkness in Edinburgh