Wave of Prayer Around the World

The Importance of Daily Prayer

Every day around the world, members of the Anglican/ Episcopal Mothers' Union (MU) pray for people in their own and in other countries. This is done through the use of prayer booklets and prayer leaflets.

It's so lovely to think that we pray for so many people and countries and to know that they are praying for us. In some of the countries it is difficult to be a Christian and in some it is downright dangerous. How important it is that we pray for peace and safety for these people and their families, and for their governments that they make good decisions for all the people in their care.

The theme of the service here this year is 'Called to Serve.' It is based on Matthew 20.28:

'The Son of man came not to be served but to serve.'

This was Jesus' example of the way we should live and one that we try to follow.

As well as the devotional services that are held each time we meet, annual prayer services are held in each place where there are MU members. In Melbourne, Victoria, Australia, the dates set aside for this are 16th to 20th July, and so our special services are held around this time every year in this Diocese.

On the same dates, the places we pray for are praying for us. We often hold the service in the church where we have our meetings, but as our particular group meets in the evenings, we usually make our Wave of Prayer Service extra special by having a 'potluck' meal together in someone's home, and holding the service there.

I have made the posters shown in the photographs and after our meal, there will be a game. Each person will be given three or four strips of paper with a question on each. To find most of the answers, the participants must try to find them on the posters in a limited length of time. Then we will go through the questions and answers and see how many have answered all their questions correctly. Maybe, there'll even be small prizes for the winners.

In this way, we will learn more about the people and countries before we begin the service.

The Service this year includes

We take turns reading the Scripture, prayers and information, so that most members of the group have a chance to participate. Before each person chosen to read about a country begins, she lights a candle for that country.

All the other countries and groups are linked in this way, too, so the prayers continue somewhere each day all around the world.

A History of Mothers' Union 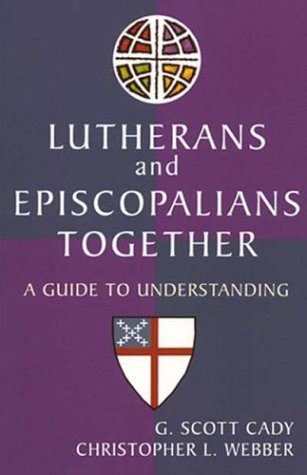 Lutherans and Episcopalians Together: A Guide to Understanding
Buy Now

The History of MU

Mothers' Union was founded in 1876 by Mary Sumner, by the wife of the Rector of Old Alresford, near Winchester in England. She wanted to help women and uplift people to see that motherhood was a special calling. It expanded quickly to a number of countries and was established in Melbourne in 1895. Two years later, Queen Victoria became its patron.

There are now over four million members worldwide and MU has extended to include anyone who will uphold its Aims and Objectives. It is a Christian charity that has as its goal the support of monogamous marriage and family life, especially when families are experiencing adversity.

Did you know about MU before reading this?

Each year at this time we are linked with seven other Dioceses; our Melbourne Diocese is linked with those of

It is so interesting learning more about these people and places and we often keep in touch with some of the people by letter, and by visiting them if we have the opportunity to travel.