What is a Ouija Board?

What is a Ouija Board?

A Ouija (pronounced "wee-ja") board - sometimes known as a "spirit board" or "Talking board" is simply a flat piece of board on which are printed the letters of the alphabet, the numbers 1 to 9, and the words "yes" "no" "hello" and "goodbye".

Sometimes the board may be decorated with various symbols to enhance it's appearance. The board usually comes with a heart-shaped piece of wood known as a planchette. It is usually used to conduct a sort of séance, whereby the participants sit around a table, with one of their fingers resting lightly on the planchette. Questions are then directed to the "Spirits" who, it is said, oblige by moving the planchette about the board to spell their answers using the letters printed on the board.

History of the Ouija Board

So, is this mysterious artifact a remnant of ancient times? A mediaeval device that was once part of the kit and kaboodle of witches, warlocks and wizards?

The Ouija board was originally produced as a parlour game - a mere toy. It's name is in fact a Trade Mark owned by Hasbro.inc which continues to produce and sell it as part of it's board games products.

The Ouija Board was first introduced to the public by businessmen Elija Bond and Charles Kennard in 1830. The name Ouija is said to derive from the word for "yes" in the French and German languages (oui + Ja)

The board was first produced as a parlour game, and was very popular as such, having no supernatural or occult connotations. However, during the First World War a well know American Spiritualist by the name of Pearl Curran began to make use of it as a divining tool. Word spread about her inventive use of the game, and before long another craze had been started as everyone began to use the board to contact "the other side".

Adherents of the Ouija Board believe that they are contacting "spirits" and "souls of the dead" when they use it and are quite convinced that the sometimes personal nature of the messages received could only be explained by supernatural means.

Predictably, some religious groups have denounced the use of the Ouija board as "dabbling with the Devil". One group - Human Life International - even went so far as suggesting that Hasbro should be officially prohibited from selling them. The most vocal and hysterical reactions tend to be from Evangelical Christian groups in the USA. In 2001, fundamental groups at Amogordo in New Mexico burned piles of Ouija boards alongside Harry Potter books, denouncing both as "symbols of witchcraft"

What's really going on with the Ouija Board?

So, are Ouija boards Devilish portals to the spirit world? Do they really allow you to talk to the dead? Well, whilst the regular users of Ouija boards may believe implicitly in it's occult credentials, scientists are not so sure. They believe it's all down to a phenomenon known as Ideomotor response effect.

So, what is Ideomotor Response effect.

In a nutshell, Ideomotor response effect means that the participants in a Ouija board séance are actually subconsciously pushing the planchette with almost imperceptible movements. The more people who have their fingers on the planchette - the more the effect is amplified.

This explains why the spelling of each sentence often speeds up as it goes along - as more letters are added to the sentence, the options for a coherent meaning are reduced. As the players begin to second-guess what the final form of message will be, their ideas finally converge, and the planchette fairly races around the board spelling the subconsciously agreed message.

So what makes scientists unconvinced that the Ouija board utilises occult powers to provide it's messages? Well it seems that the spirits don't have the power to move the planchette by themselves; no fingers - no movement.

"Ah", say the Ouija board believers, "That's because the spirits work through us", Suggesting that the "power" is somehow transferred from the "spirits", via the sitters fingers to the planchette.

Experiments have shown however, that this only works if the sitters know where the letters are. When the letters are placed upside-down on a glass table, so that the letter positions can be seen by a camera placed beneath the table, but not by the sitters themselves, the seances tend to go pear-shaped - the messages that are produced are invariably rubbish - a nonsensical jumble of random letters. 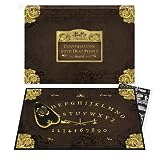 The Power of Suggestion

So, it would seem that not only do the spirits not have the power to move the planchette independently, but they are also completely flummoxed by simply turning the letters over - either that, or the ideomotor effect explanation is the right one.

The real danger of playing with Ouija boards is believing that any of it is real. The power of belief is potent and dangerous stuff and the power of suggestion can produce profound - and even dangerous results - ask any witch doctor!

Your subconscious knows far more about you than you do. The messages provided by the Ouija board may contain accurate and intimate knowledge - but that's because you are unwittingly providing it yourself. So, if you do use a Ouija board, remember that it is nothing more that a psychological novelty and has no power of it's own - That's why it's marketed as a game - because that's all it is.