Buddhism was founded by Siddhartha Gautama, who became known as the Buddha (enlightened one). The Buddha was born in northern India in 485 BC. By the time of his death in 405 BC, his teachings had spread across India, eventually reaching Southeast Asia, Korea and Japan.

Today, there are more than 330 million Buddhists around the world, mainly in eastern Asia but also in Europe and North America.

The Buddha taught that it was possible to overcome suffering in the world and become enlightened by following the Eightfold Path. The steps along this path are right knowledge, right attitude, right speech, right actions, right livelihood, right effort, right state of mind and right concentration.

Buddhists must make sure that each of these aspects of their life is samma (right). The Eightfold Path involves a great deal of discipline, so Buddhists often find a teacher to help them. Once they have understood the path, they try to practice it. This takes them towards enlightenment and, ultimately, they aim for nirvana (a state of supreme happiness and bliss).

Nirvana is difficult to achieve, for Buddhists believe that we constantly travel through an endless cycle of life, death and rebirth, either as humans or in other forms. All these lives are subject to karma (the law of cause and effect).

This means that every action has a result, either good or bad. If we do bad things, we increase our negative karma and keep being reborn into new lived. If we do good things, we gain positive karma.

Buddhists try to get rid of negative karma by following the Eightfold Path, doing good deeds and by meditating. They believe that if they succeed, they will be released from the law of karma and stop samsara (wandering from life to life). They will be free from suffering and achieve the peace of nirvana.

The Buddha preached that life is always changing and that people should not look for happiness in material things, such as wealth and possessions. Instead, they should get rid of fear, passion, greed, ignorance, selfishness, and all the other vices that keep them attached to the world. In this way, they become enlightened and can achieve nirvana.

Prince Siddhartha Gautama was born into a royal family in northeastern India in 485 BC. His father sheltered him from the suffering in the world, but while he was out of the palace one day Gautama came face to face with a sick man, then an old man and finally a dead man. He was only 29, but Gautama understood that sickness, old age and death would come to him eventually, too.

He decided to follow a holy way of life in order to come to terms with the meaning of life. He left behind his wife and family and lived a poor life without any luxuries at all. He meditated every day and fasted. Gautama suffered a great deal. His hair fell out and he grew thin and weak. After six years, Gautama decided that his extreme lifestyle was not the best way to find peace. He decided to find a middle way, somewhere between an ascetic, monk-like existence and a life in the everyday world.

One evening, Gautama was sitting in the shade of a bodhi tree (tree of enlightenment) in Bodh Gaya, a village in northeastern India. After meditating here for a long time, he achieved the state of perfect peace, or nirvana. From this moment on, he became known as the Buddha. Today the sacred Mahabodhi temple stands on the site of Buddha's enlightenment. 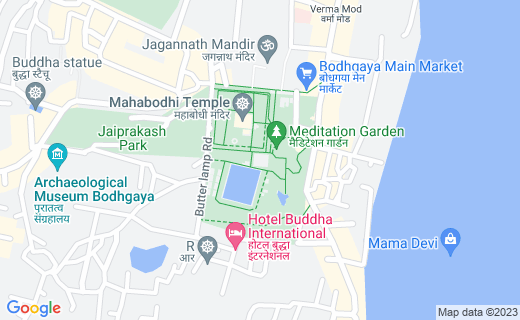 During his deep meditation the Buddha came to understand the Four Noble Truths. These are the central Buddhist teachings. By understanding these truths, and following the Eighfold Path of right living, a person can rise above suffering and achieve the state of nirvana.

The Buddha gathered together a group of five disciples and took up a life as a holy teacher. For the next 45 years he traveled around northern India, teaching his message and begging for food. His first sermon was at Sarnath, near Varanasi in northeast India. He preached in a deer park, which is why some images of Buddha show him with deer at his feet.

When the Buddha died, his last words to his followers were, "Do not cry. Have I told you that it is in the nature of all things, however dear they may be to us, that we must part with them and leave them." He meant that Buddhists must not be too attached to anything, as this will only bring sorrow and suffering and will hinder them on their quest for nirvana.

When the Buddha died at age 85, he became known as the Tathagata (Thus-gone). Having achieved nirvana when he died, the Buddha was not reborn into life again like other people. Buddhists believe he moved beyond life to a blissful state where he neither existed nor did not exist.

As Buddhism spread from India throughout the rest of Eastern Asia, it changed. It adapted to local cultures and adopted elements from other religions. Early Buddhism emphasized the importance of meditation. It stressed that people are on their own in the world and can reach nirvana only through their own efforts. This strand of Buddhism is known as Theravada (the teaching of the elders).

The other strand of Buddhism is known as Mahayana (great vehicle). Followers of Mahayana believe that people are not alone and they must work together to achieve nirvana. Help also comes from the Buddha, other buddhas (enlightened ones) and bodhisattvas (people who have already reached nirvana but have chosen to stay in the world to help others achieve it too).

Both Theravada and Mahayana Buddhists believe that the Buddha himself was only one in a long line of enlightened people, and that many other buddhas exist as well.

Mahayana Buddhism differs from country to country. In China, Buddhism was practiced alongside the ancient Chinese religions of Confucianism and Taoism. Many bodhisattvas acquired Chinese names. In Tibet, the use of ritual, symbolism, meditation and magic became important. Tantric Buddhism, as it is known, uses mantras or sacred chants written in tantras (secret books) to help people attain nirvana. Spiritual teachers, known as lamas, educate people in Buddhism. Lamas are also said to guide a dying person's spirit between death and rebirth.

In Japan, Zen Buddhism adapted the Chinese practice of meditation. Zen meditation requires the person to sit cross-legged in the lotus position. As they meditate, they think about a koan (riddle), such as "What is the sound of one hand clapping?". The purpose behind such riddles is to make people focus on the meanings behind words. In this way, they escape their conventional ways of thinking and free their minds to reach nirvana. Zen meditation can take place in a garden, a teahouse or even through practicing ancient arts, such as flower arranging or archery.