Why I'm making this page on Faith For Dying:

A recent death in my own family has driven home the reality of the subject and caused me to be even more concerned than I was before that many people don't have faith for dying. I know that death is an unpleasant subject for many and one which many people like to try to avoid. Yet, death need not be feared at all, and can even be something to look forward to, I hope to show why here. I sincerely hope this page will be of help to someone.

A classic on death and dying in general:

Death is NOT the end.

The first thing you must realize in order to have faith for dying is that death is not the end. The Bible clearly states that there is life after death, despite the musings of Solomon in Ecclesiastes (such as in Ecclesiastes 9:5, where he states that the dead "know not any thing." Ecclesiastes, though inspired, is simply a record of man's search for meaning. Many people think as Solomon mistakenly did that death is the end. Yet. the New Testament has many references to life after death. (For example, see Matthew 22:32, Luke 16:30, Luke 20:35, Hebrews 9:27). In II Corinthians 5:1, the apostle Paul, speaking metaphorically, assures believers that if the tent of our earthly existence be dissolved, we have a permanent building in the heaven.

Check out this book on life after death:

There are many books on life after death. Here's one. Drawing on some of the most powerful theories and trends in physics, evolutionary biology, science, philosophy, and psychology, D'Souza shows why the atheist critique of immortality is irrational and draws the striking conclusion that it is reasonable to believe in life after death

The basis of dying faith:

What dying faith means to me:

Faith for dying means to me that trust I have in my Lord Jesus to take me safely across and into His waiting arms. I realize that there are many different religious beliefs out there and it would be easy just to shrug and take the position that all roads lead to heaven, but that is no more true in the area of faith than it is in the area of cross country travel. Jesus plainly said, in John 14, "I am the way, the truth, and the life. No one comes to the Father except through me." I'm not saying that you have to be religious and go through a lot of ceremonies. What I'm talking about is a simple act of faith. Paul said in Romans 6:23, the gift of God is eternal life, through Jesus Christ, His Son. You have only to open your heart to Him and receive His gift by faith. He died on the cross for you. He suffered an agonizing physical death in payment for our sins so that we would not have to suffer an eternal spiritual death, but rather could gain eternal salvation and thus spend all eternity with Him. ("For God so loved the world that He gave His only Son, that whoever believes in Him, shall not perish but have everlasting life." [John 3:16])

Are you ready to die?

If you answered the above poll with anything but "YES," you need to check out the links below:

For more on the basis of dying faith, check out these hubs:

The Result of Dying Faith:

In I Corinthians 15:54-57, the apostle Paul says that "death is swollowed up in victory. He then asks a rhetorical question: "O death where is your sting?" and answers it by saying that "The sting of death is sin and the strength of sin is the law, but thanks be to God who gives us the victory through our Lord Jesus Christ."

In Colosians 3:3, we are told that as believers, our life is hid with God in Christ. That being true, as Neil Anderson points out, in his article, "Free From The Fear of Death, " ..."we won't suffer loss when we physically die. We can only gain. ...The person who is free from the fear of death is free to live today."

How often have you asked yourself the question, "I wonder what it will be like on the other side of death?". Whether you are a young person, middle aged, or senior adult, the cold hard facts are that we will all succumb eventually to that time in our lives where we will take that last breath as we feel ourselves being drawn away into eternity. We all have a fear of death or at least a healthy respect for it because of the uncertainties associated with not knowing what lies beyond the grave. We have been told many things over the years, which we have come to believe as truth, but it has never been explained how these things could be.

Earth seems to be exciting with new discoveries and adventures every day. The church has portrayed heaven over the years through novels and movies and paintings as a dull place. However, the kingdom of God, the afterlife and the place where God lives, is much more exciting and glorious than anything the earth could ever produce. The colors there are beyond the natural spectrum and there are inexpressible sounds. The discoveries that can be lived in the kingdom of heaven will make the earthly lifestyle bland by comparison.

In John 14:3, Jesus told his disciples (meaning all who believe on Him) that he is going to prepare a place for them. He didn't describe the place. But just to know that it will be a place prepared by Him is enough. Along that line, I offer the following story (author unknown) which was told to me 10 years ago by a friend, since it fits here very appropriately: A sick man turned to his doctor as he was preparing to leave the examination room and said "Doctor, I'm afraid to die--tell me what lies on the other side? The doctor very quietly said--"I don't know".

"You don't know? You, a Christian man, do not know what is on the other side?

The doctor was holding the handle of the door. On the other side of the door was a dog who sprang into the room and leaped on him with an eager show of gladness.

Turning to the patient the doctor said "Did you notice my dog? He's never been in the room before. He did not know what was inside. He knew nothing except his master was here and when the door opened he sprang in without fear. I know little of what is on the other side of death, but I do know one thing. I know my master is there and that's enough." (--this was given to me by friend 10 years ago, but I have since found this on the web HERE)

My poem on faith for dying

The span of man's life was never

Here on earth meant to be forever

Fact is, we were born to die--

Some sooner of us than others,

But, it isn't when or why

But, WHERE that counts, my brothers

For if the loved one knew the LORD,

Then be thou not afraid.

She is not lost, she is not dead,

But, only has gone on ahead

To wait in that fair land of dreams

Where all is pleasant and serene,

Passport to a happy death:

Death is the one trip we all take, with no tour guide or travel agent to hold our hand. to this guide.

Aside from the many references to heaven as a real place in the Bible itself, there is abundant proof of the existence of heaven in the testimonies of those who have gone there and come back to tell about it. I offer one example below. I have read this book and find it truly amazing and encouraging. Four-year-old Colton, son of a small town Nebraska pastor, emerged from life-saving surgery with remarkable stories of his visit to heaven. He also told about being able to look down and see the doctor operating and his dad praying in the waiting room. Colton further told how he met his great grandfather who died 30 years before Colton was born and his miscarried sister, whom no one had told him about. He shared impossible-to-know details about each. He described the horse that only Jesus could ride, about how "really big" God and his chair are, and how the Holy Spirit "shoots down power" from heaven to help us. Told by the father, but often in Colton's own words, the disarmingly simple message is heaven is a real place..--JMB. 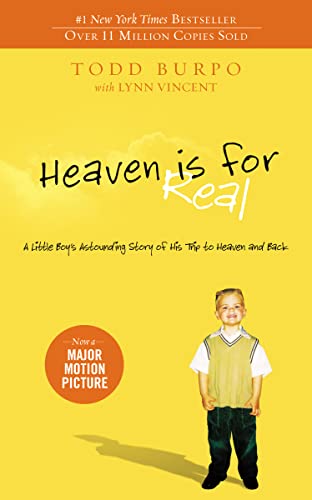