January 1993: A young teenage girl is strangled by an unseen force and her brother screams for help as something throws him across the bed. Their mother watches as the entity that has terrorised her family for three months manifests into a hideous gnome-like creature.

It all started on a hot night on the Peninsula. Mary Blake lay awake unaware that in the next room her daughter Anne-Marie was fighting for her life.

The next morning, Mary was to witness the marks around her seventeen-year-old daughter’s neck. Those marks she said, would become a regular occurrence over the next three-months.

Mary believed the entity was sent to her house by a young man who held sexual desires for her daughter. He was a member of a black occult group, and when he was rejected by Mary’s daughter he turned to the black arts for revenge.

Over the next few weeks the entity began to attack the family more often.

One night while relaxing in the bath she claims she was grabbed by the shoulders and forcibly pushed under the water. When she eventually broke free she rushed from the room and would only return when accompanied by her daughter.

The evil presence, it seemed, favoured the bathroom and Mary’s bedroom. As her son Wayne entered her bedroom he was picked up and thrown head first into her closet. A lump quickly appeared on his head.

Mary said the entire family began sleeping in the living-room, and as they huddled together a strange giggle could be heard from somewhere in the house.

Anne-Marie was being strangled several times a day. Her neck was bruised and swollen. A local priest refused to help. The entity was growing stronger and the family were growing weaker.

The creature finally showed itself one evening while the family was getting ready for bed.

According to Mary it was the height of a gnome with long arms that ended in frog-like hands. It was the most terrifying and hideous thing she had ever seen.

During this traumatic time a friend of the Blake family had been searching for someone that could help. His efforts were rewarded when he was given the phone number of a group of white-witches.

When the witches arrived at the house the family rushed onto the front lawn to greet them. As they began to explain the terrifying events that had occurred over the past few months, the bedroom blinds suddenly flew open and cruel laughter filled the air.

Mary said that Anne-Marie began to sway, apparently as a result of the entity’s unsuccessful attempt to possess her. As the witches began to cleanse the house of the evil presence, the entity made one last attempt at possession, then was gone.

Mary went on a holiday after things settled down and while she was away she received a phone call. It was back.

The witches were called in again, and the entity has never returned. But the terrifying memories will always remain. 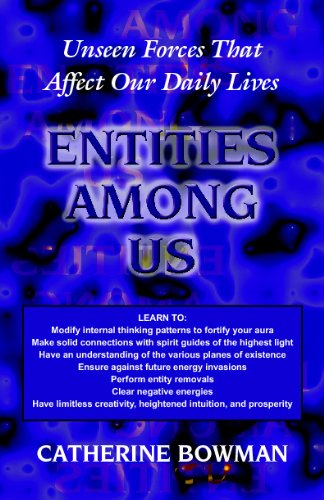 Entities Among Us: Unseen Forces That Affect Our Daily Lives
Buy Now