The Guru Granth Sahib - Holy Book of the Sikhs

The Eleventh and Last Guru of the Sikhs

The Guru Granth Sahib Ji is the holy book of Sikhism and is the eleventh Guru of the Sikhs. The Holy Granth Sahib is treated like a living Guru by the Sikhs and is respected, loved and cared for like the previous living Gurus before.

The Guru Granth Sahib was made the last and perpetual Guru of the Sikhs in 1708 by the tenth Sikh Guru, Guru Gobind Singh Ji. Before his demise, he instructed the Sikhs to treat the Granth Sahib as their next and eternal Guru. So all in all the Sikhism has 11 Gurus - 10 in human form and the Granth Sahib.

The Guru Granth Sahib is a 1430 page book that is considered by the Sikhs to be sacred source for wisdom and guidance - a spiritual guide for all mankind for all generations to come.

The holy book is a compilation of the actual words spoken by the founders of the Sikh religion (the Ten Gurus of Sikhism) and the words of various other Saints from other religions including Hinduism and Islam. This shows that the Sikh Gurus did not separate and divide religion but tried to provide true knowledge to all.

The Holy Guru Granth Sahib was written in the Gurmukhi script, a script that is considered to be a modern version of the ancient Sanskrit language which was developed and made popular by the second Sikh Guru - Guru Angad Dev Ji. The word Gurmukhi literally means "From the Guru's mouth".

The final copy of the Guru Granth Sahib was prepared by Guru Gobind Singh Ji. It includes the teachings of all the Gurus and also saints of other religions. It is compiled in the form of hymns written in praise of God, which describe what God is like and the right way to live and why we should meditate in God's name.

The Placement of the Guru Grant Sahib Ji

The Guru Granth Sahib is the centerpiece of the Gurudwara or Sikh temples. It is respectfully placed on a dominant platform of the main pray hall and is covered with beautiful colored fine cloth. The platform is topped of by a canopy that is also decorated in attractive colored materials.

The Guru Granth Sahib provides unique and unequaled guidance and advice to the whole of the human race. It is the torch that will lead humanity out of Kali Yug (era of evil) to a life in peace, tranquility and spiritual enlightenment for all the nations of the World. The main message can be summarized as:

1. All peoples of the world are equal

7. Meditate on the name of God (Remember God)

Translation of the Guru Granth Sahib

English translation of page 1 of 1430 pages.

I found this site that has provided a complete translation in English of the Holy Granth Sahib Ji. Here is the translation of the first page:

"One Universal Creator God. The Name Is Truth. Creative Being Personified. No Fear. No Hatred. Image Of The Undying, Beyond Birth, Self-Existent.

True In The Primal Beginning. True Throughout The Ages.

By thinking, He cannot be reduced to thought, even by thinking hundreds of thousands of times.

By remaining silent, inner silence is not obtained, even by remaining lovingly absorbed deep within.

The hunger of the hungry is not appeased, even by piling up loads of worldly goods.

Hundreds of thousands of clever tricks, but not even one of them will go along with you in the end.

So how can you become truthful? And how can the veil of illusion be torn away?

O Nanak, it is written that you shall obey the Hukam of His Command, and walk in the Way of His Will. ||1||

By His Command, some are high and some are low; by His Written Command, pain and pleasure are obtained.

O Nanak, one who understands His Command, does not speak in ego. ||2||

Some sing of His Power-who has that Power?

Some sing of His Gifts, and know His Sign and Insignia.

Some sing of His Glorious Virtues, Greatness and Beauty.

Some sing of knowledge obtained of Him, through difficult philosophical studies.

Some sing that He fashions the body, and then again reduces it to dust.

Some sing that He takes life away, and then again restores it.

Some sing that He seems so very far away."

You can read and learn more about the Sikh Holy Book by getting a copy of one of these fantastic Books.

The Adi Granth: Or The Holy Scriptures Of The Sikhs
Buy Now 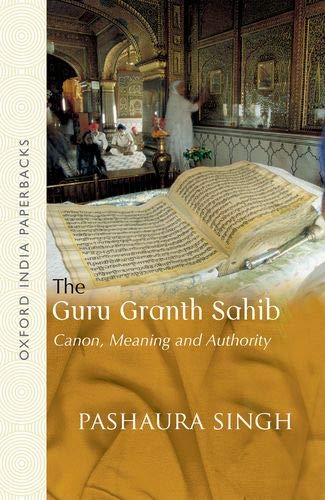 Had you ever heard of The Guru Granth Sahib before reading this page?

Sikh and Sikhism Items on Amazon - search for products here

Like this lens? Have something to share about Sikhism and Guru Granth Sahib? You are welcome to do it here.