What is Ifa-Orisha, what is it for?

Among the Traditional African Religions that are not only still alive an Africa but have also spread into the "diaspora" as a sad result of the even sadder slave trade, Ifa (or more generally speaking Ifa-Orisha) is probably the best known. The very name Ifa-Orisha is based on developments in the diaspora... in Africa (specifilally Nigeria) where the religion comes from, there never was any need to give it a "blanket name", because the worship, rituals and traditions were mainly family-based, concentrating on the worship of one or more individual Orishas.

These Orishas are spiritual beings, not too much different from what Jung called "archetypes", AKA essential concepts living in the collective consciousness of all human beings, dreaming and lingering there to be revived by incidents and accidents or... by the performing of often age-old rituals.

Some names of Orishas are fairly well-known, even outside the religion itself. Take Babalu-Aye, made famous through a song by Desi Arnaz, who as an actor played the husband of Lucille Ball in series like "I love Lucy". Or Shango, a quite exited and excitable specimen in the Nigerian (Yoruba) pantheon... it's not an uncommon name for artists, and it's even used here and there to describe the whole religion.

Another famous character is Orunmila, also known as the Witness to Creation, having been present when God (called, among other names, Olodumare) created the earth and populated it with human beings. Together with the Trickster character Eshu who encourages creative disorder, Orunmila sorts out the mess humans make of their own lives, those of others, and the world in general. Orunmila is also known under the name of Ifa, although this latter word also indicates the divination system ruled by this particular spirit. This Ifa divination enables people to figure out their optimum Destiny, in other words how they should live in order to make the best of all possible worlds - not only intheir own micro cosmos, but also in the cosmos at large.

In Ifa divination, reality can be divided and researched via 16 principles, each of which can be combined with any other, resulting in a total of 256 patterns or "Odu's". Each Odu is not only a chart or map of ones Destiny, it also gives through lots of (sometimes very ancient) texts a good insight in what should be done in order to improve ones life. There's a saying in Ifa-Orisha: "Ifa will mend our broken world".

The illustration shows the "signs" of the 16 major Odu. They are represented here as "Meji" or "double" Odu's, meaning that each one is combined with itself but, as said, each Odu can be combined with any other Odu... creating an awful lot of options, roads and meanings... especially when the acompanying texts come into play, expanding the possibilities literallly into the thousands. 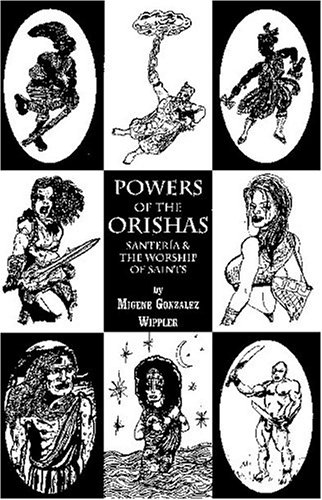 Powers of the Orishas: Santeria and the Worship of Saints
Buy Now