Jewish songs that will have you rolling in laughter

Sean Altman, former member of Rockapella and songwriter extraordinaire, has reconnected with his people...as JEWMONGOUS.

As Jewmongous, Sean Altman lays all his jewdiosyncrasies out there. He sings hilariously irreverent songs of the life and history of jews. Staring stereotypes square in the eye, Jewmongous brings over-the-top humor to his music with lyrics that will certainly make you laugh.

The Seattle Stranger called Jewmongous "The bastard love child Tenacious D and Fiddler on the Roof never had."

The "Taller Than Jesus" referenced in the album title and song refers to an alternative theory as to what The Beatles' John Lennon meant when he said that The Beatles were bigger than Jesus. Perhaps he meant that they were simply taller than Jesus, as it has been proved than the average height of people today is more than the average height of people then. 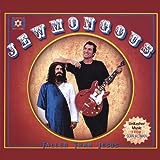 Preview Songs from Jewmongous - And purchase songs as MP3s

Downloads songs from Jewmongous (legally!) as MP3s through amazon.com.

The songs on this album will have you laughing even when you try not to. The shocking lyrics will have you wondering just how far he's willing to go.

From the Lyrics of Jewmongous songs

Raise a glass and drink a toast to Christian baby blood.

What do Christians feed their babes to make it taste so good?

When something is too pricey you say "Sean, go Jew them down".

I'm sick and tired of telling you that "Jew" is just a noun.

(Just Too Jew For You)

And we knew how to resist,

Tried to kill us, we survived, let's eat!

(They Tried to Kill Us)

He could heal the sick and save your soul,

But he couldn't dunk a basketball.

Is Jewmongous Offensive to you?

Who is Jewmongous? - It's Sean Altman!

The group who revolutionized acapella music

Sean Altman used to be a member of Rockapella. You remember, right? He was the guy with the beads in his hair while they were on Where in the World is Carmen Sandiego. Yeah...you remember now, right?