The religious side of Easter gift giving is often forgotten with the Easter Bunny, candy and everything else that does not represent the true meaning of the Easter holiday. Now, I would not necessarily say that the pope represents this religious holiday, but rather the belief in Jesus Christ and his resurrection, and how he died for our sins, as all Christians believe. This is the true meaning of Easter.

Pope Benedict XVI represents Christianity and with that, we can all celebrate the resurrection of Christ. This is about Christmas, Easter and every occasion gifts that give tribute to the pope and what he stood for.

Pope Benedict XVI (born in April 16, 1927 as Joseph Aloisius Ratzinger); headed the Roman Catholic Church from April 24, 2005 (elected on April 19, 2005) and officially stepped down on February 28, 2013, giving his papal resignation. It is the first time Catholic history of a pope's resignation, since the resignation of Pope Gregory XII in 1415. Unlike his predecessors who reigned until their deaths, Pope Benedict XVI said that he did not feel that he could no longer fulfill his duties as pope due to his failing health. This came to a shock to the Catholic Church. Many have been understandable with concerns of his health and the need to step down as pope. Others have criticized that it could be due to the recent sex scandals within the church.

Nevertheless, let us not dwell on the negative aspect of allegations of what happens behind the scenes. Rather, look back at all the good that the pope has done worldwide. I am not Catholic and I do have my own views of the positive and negative issues of the Roman Catholic Church. However, today we are focusing all that Pope Benedict XVI has done to keep peace around the world and sharing a tribute with Easter gifts.

These are one of a kind custom and unique gifts that are created on Zazzle Only a handful are shown here. Go to shop to see more.

The photo combination is Pope Benedict XVI with the Vatican City in the background. Created exclusively by fabpeople (stands for fabulous and famous people).

Thumbprint of this image is on file.

Wall Canvases of the Pope XVI

Click on the link shown above under "Pope Gifts" to view the wrapped around canvases to purchase. Adjust to many sizes from small to extra large. These will look good on your wall.

Jesus of Nazareth: The Infancy Narratives

"Palm Sunday tells us that...it is the cross that is the true tree of life."

These Pope Benedict XVI and the Coats of arms of the Holy See products are on 3DRose and the unique designs of Fabpeople. Find all the Fabpeople designs under the individual product index pages. Shown here are these two pages for the trivets and wall clocks. 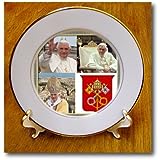 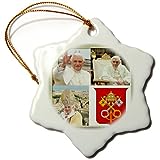 "In this Year of Faith, may every Christian rediscover the beauty of being reborn in the love of God and living as his true children."

As white smoke bellowed out from the stack, it was clear that a new pope had been decided on. Cardinal Jorge Mario Bergoglio of Buenos Aires became the first Latin American pope on March 13, 2013.

This is an exciting time for the Roman Catholic Church and the growing Latin Catholics.

The Fathers of the Church

The Fathers of the Church: Catecheses: St. Clement of Rome to St. Augustine of Hippo (Giniger Books)
Buy Now

As an affiliate of Zazzle you can make 15% on sales from your blog, articles and websites. Fabpeople on Zazzle is just one of my many shops. Very my profile page there and start making money when you sell one of the gift items from your link.

What do you think of the Pope Benedict XVI tribute gifts for Christmas, Easter or any time?