What Is A Real Man?

Seems Like There Are Alot Of Different Opinions On This Subject!

The other day I tracked down a friend- she had stopped emailing. I knew something was wrong.

"I've been extremely depressed, and have no money at all", she said.

"Because I can't pay my half of the rent, my boyfriend wants me to move out. I have noplace to go.

And I thought to myself, "That is not a real man"

But of course that is judgment on my part.

Yet, some kind of weird process had started in my head. I wanted answers,

So, I decided to do an extremely casual poll- by calling some women friends and asking "What is a real man?"

I figured this first lady would have a good answer, because she's sharp. However she was preoccupied.

I stopped my poll and ran out to get the book. I love the excitement of a book I can't put down.

Must admit that I was surprised. To her, a real man is the dominant in a dominant/submissive relationship?

So Why Are Some Women Drawn To This?

Apparently it all depends on the wiring in your head

My wiring doesn't go so much for this S/D stuff.

But the book is a runaway best seller. Not much of a plot other than the couple has sex in every imaginable place and way.

The dominant is extremely rich and good looking. We know that's realistic.

The submissive is drop dead gorgeous and pure until she meets him. Also extremely real life.

But it made me wonder- why would any woman want to be tied up and assaulted?

Is it because we've become so strong in every other aspect of our lives that we now crave dominance in the bedroom?

Are we angry at ourselves, wanting punishment?

The author simply says this is her midlife crisis. She's amazed at how popular the book has become.

It's really caught alot of women.

But I could only get through parts I and half of part II- that's a first for me, as a book-a-holic .

I found myself skimming through it, to see if there was any kind of plot.

But you never know, I may weaken and get part III

So I Called An Insightful Friend

"that's an interesting question", she said

" Hmmm. Sheeze. That is a question." she repeated.

I knew Emily would really think on this, because that's her nature. She's Native American, and has studied many subjects like this for a long time.

Finally, she said " Not to be facetious,but I think a real man has enough courage to kiss the woman first."

"You don't watch TV", she said, but on TV the women are always kissing the man first. "

When did that start?

Not all that long ago, you didn't ask a man to dance, much less to go on a date. For sure you didn't call him. But now it seems like the women initiate everthing.

And it seems like women are being treated pretty badly, worse, actually, as geneations pass.

As a side note, for example, I read somewhere that the less clothes women wear, the worse they are treated .In other words, now that we have our little swimsuits etc we get treated like dirt.

Real or not real? (From Hunger Games- now THAT was a trilogy!)

The End of Television?: Its Impact on the World (So Far) (The ANNALS of the American Academy of Political and Social Science Series)
Buy Now

Thinking About This Sent Me Off On A Small Detour

We emulate what we see. We become it.

And what's on TV isn't really very positive. Information is embedded in us.

We lose our own mind.

No teachers tell us this, do they. Are they under the same spell?

After all, the flicker patterns on TV put people into a deep alpha state.

So, if our daughters are watching this stuff, where the women are the aggressors, and sexually active early on, are they being programmed by what they see?

is There Gender Confusion?

And our culture has moved to a point where it almost takes 2 people working to provide. (maybe it doesn't. maybe we just need to simplify and not be driven to consume at our present level )

We buy cars we can't afford, houses- we seem to be programmed to be consumers.

But are we missing the point? We're not very happy, given all of our material possessions.

And maybe our energy's running the wrong way.

We're electrical creatures. The man has the positive pole, or polarity, and the woman has the negative pole. One is not superior to the other, but rather they are to complement one another.

A real man allows a woman to be all she can be, and then the woman does the same for a man. This is our genetic programming.

It could be that couples can be blissfully happy when their relationship is one of equality and mutual benefit.

It's well documented that when there is imbalance in this area, the result is disharmony...

And an illustration of the power when male and female energies are combined.

How To Get A Good Man

1. A real man is solvent. In other words, he pays his bills. he has a place to live. He doesn't buy cigarettes and beer when he can't put food on the table. He may have some rough times, but he figures it out.

2. He is tough. And by tough I don't mean he doesn't cry. I mean he doesn't turn to substance abuse when he has a problem.He doesn't collect unemployment or welfare unless there is no choice. He doesn't intimidate those weaker than he is, ie he is not a bully. he doesn't look for a woman to support him financially. He doesn't father children and then take no part in their upbringing.

3. He can nurture children, pets, and the elderly.

4. Real men do not sit in front of the TV night after night. They look for ways to improve the world around them. They read books. They organize causes.

What is your definition of a real man?

And how do you get him?

How To Make A Man Fall In Love With You - in 90 minutes or less!

But make sure he's a good man! 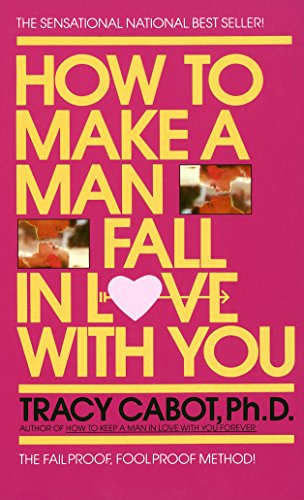 How to Make a Man Fall in Love with You: The Fail-Proof, Fool-Proof Method
Buy Now