100th Anniversary History of Girl Scouts and Their Uniforms

100 Years of Girl Scouts in America

Girls Scouts of America began meetings one night with 18 girls in 1912's Savannah GA, a little before World War I and almost a decade after the Wright Brothers' plane flew at Kitty Hawk. To celebrate during the spring of 2012, The Ohio State University constructed a fascinating exhibit to showcase the Girl Scout organization, its people, and its various uniforms for display from March 10 through June 1, 2012 for their 100th Anniversary.

The large exhibit has been housed in the special collection of costumes and textiles amassed on the second floor of Campbell Hall, just half a block from the magnificently refurbished main library at Ohio State. After the initial display, the Girl Scout exhibit may be shared in part at other locations, or be placed with the Girl Scouts of Ohio's Heartland (discussed below). For May 19, 2012 a special day for Girl Scouts was arranged for the exhibit space. For only $5.00, local scout troop members can enjoy the museum, along with workshops about careers in fashion, vital body image issues, and Girl Scout uniforms of the past and future.

Some other recent exhibitions from the Campbell Hall program in the Department of Consumer and Textile Sciences at OSU have included: 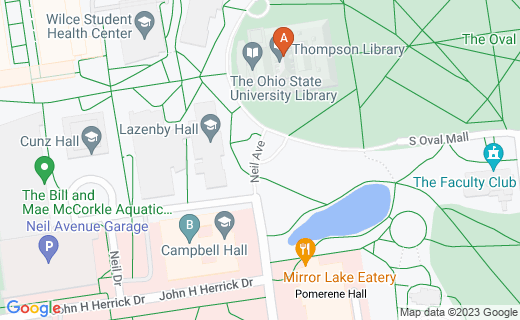 Please visit the Gladys Keller Snowden Gallery of fashion exhibits on the second floor. Open Weds-Thurs 10am - 6pm, Fridays 10am - 4pm, and Saturdays

The Historic Costume and Textiles Collection

This large collection of textiles and costumes in storage qualifies as a museum on its own and it often displays themed exhibits in the atrium of the Thompson Library. The library stands at the foot of the Oval and Mirror Lake on the OSU Campus and is open to the public.

One popular library display has included Broadway Show costumes and props from the play Equus, when it was performed in the 1970s. Able to view the costumes in close-up, visitors marveled at how an actor could stand and walk on the wire hooves and wear the wire sculpture horse's head all at once. At the same time, viewers could wander among upright display cases and see the actual Olympic Gold Medal that historic African American track and field phenom Jesse Owens won in Hitler's Germany during the 1930s. The various libraries and museums at OSU hold a rare world full of exhibits and artifacts. Much memorabilia of the Girl Scouts of Ohio Heartland Council's archive were added for temporary viewing in Campbell Hall.

You may wonder at this revelation, but famous designers Bill Blass, Halston, and Mainbocher helped to design Girl Scout uniforms. However, the first uniforms were handmade at home, along with the original Girl Scout Cookies, a simple sugar cookie that the girls baked and sold for 30 cents a dozen.

After speaking with the founder of Boy Scouts of America in 1911, Robert Baden-Powell, Ms. Juliette Gordon Low founded the Girl Scouts with a call to her cousin and invitations to 18 girls to gather for a new club. Although she had previously started Girl Guide groups in Scotland and England, she likely never conceived of the 45 different uniforms that are on display in the OSU exhibit today.

Those uniforms of the first years, 1912 - 1913, were patterned after the middy dresses and knickers of England's Girl Guides and were all blue. From there, uniforms became largely green, but when younger Brownies were added, they wore homemade shirts that laced at the throat and a soft cap that made them appear ready for a Robin Hood film. Kindergartners were added with a blue tunic and called Daisys, because Ms. Low's nickname was that flower.

The positions within the organization of girls expanded in 100 years of activity: Brownies, Daisys, Cadets, Seniors, Girl Scout Leaders, Life Members. There may be more positions and more uniform styles in the future as new ideas are implemented. From time to time, I am told by members that dads have been registered as official Girl Scouts in order to accompany their daughters and wives to Girl Scout Camps. A men's jacket and tie became part of the line of uniforms, but no one recalls any Plus Sizes for women available, although some women remember a maternity uniform.

A Large Number of Artifacts

I think the Girl Scout Uniforms Exhibit deserves much more space. The photo that you see to the right features the entrance display and the floor area of the total exhibit is approximately 4 times that of the first display, packed with mannequins and artifacts in specified alcoves. The easiest one to view is a small upright case filled with Girl Scout dolls, but it is closely surrounded by the uniforms. As the exhibit becomes more popular, I think it will be moved to a larger room. However, a comfortable lounge area, restrooms, and vending machines are located outside the main door. It is a good place ti sit and read through the tour booklet before viewing the displays.

Starting at the entrance, one may walk counterclockwise and view uniforms by years, along with exhibits about dedicated scouts, Most interesting are handbooks and notebooks taken to Girl Scout Camps and Leadership Workshops during The Great Depression. A small exhibit of this sort is one from 1933 by "Peggy." It includes her notebook and a folder containing a typewritten poem that was featured in scouting materials distributed among the national group. The poem is mostly covered by a booklet and one cannot approach close enough to read the first two stanzas, but for a few words, because the exhibit sits back in a smaller alcove on a ledge and one may not touch anything in the room. One phrase I caught spoke of beauty that cannot be contained inside oneself. The full poem must be beautiful, but it is not included in the tour booklet.

To the right of "Peggy" is a mariner's quilt in white and blue to match the earlier Girl Scout middy uniforms. Its artist died in early March 2012 with nearly a full 85 years in Girl Scouts. Her 85th year award pin was placed on her current uniform and donated to the Ohio Heartland Council at 1700 WaterMark Drive; Columbus Ohio 43215-1097. This dedicated woman was Becky Fraunderfer, who became the first President of the former Seal of Ohio Council of Girl Scouts from 1963 - 1970. The quilt is in perfect condition and of quite good craftsmanship. 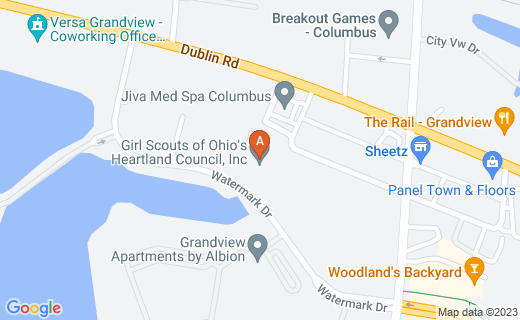 The Girls Scouts of America are sometimes confused with Camp Fire USA. This second group actually began earlier, as Camp Fire Girls of America, in 1910. Since 1975, it has been co-ed and inclusive of boys and girls of all ages from Pre-K through 21.