After head coach Chuck Pagano spent the 2012 season battling cancer, the Indianapolis Colts looked forward to having him back to coach the 2013 campaign.

Despite injuries to key players like wide receiver Reggie Wayne, tight end Dwayne Allen, and running backs Vick Ballard and Ahmad Bradshaw, the team should much progress over the previous year. The team was so decimated by injuries, seven starters were sidelined for the entire season and the team led the league with the most players on injured reserve with 17.

The team matched their win total of last season finishing with a 11-5 record and a perfect 6-0 in the AFC South. The team was able to comeback from a large half time deficient to beat Kansas City 45-44 in the wild card round of the playoffs.

Many individual players had great seasons. Linebacker Robert Mathis led the NFL in sacks with 19.5. Quarterback Andrew Luck showed improvement in his second season despite injuries to many of his targets. Wide receiver T.Y. Hilton stepped up after Reggie Wayne was lost for the season and led the team in receiving yards. Before Week 3, the team traded their 2014 first round pick for Browns running back Trent Richardson. Richardson struggled all year and was a non factor for the offense.

The 2013 rookie class was a disappointment in their first year. Guard Hugh Thornton was the only regular starter for the season. First round pick, linebacker Bjoern Werner, was a back up behind Erik Walden for most of the year and will have to step up this year in order not to be labeled as a bust.

Going into 2014, there is a lot of promise to for the team to succeed. The Colts were the only team in the AFC South to finish with a winning record and will take a couple of seasons before any of them can challenge them for the lead in the division.

In May it was announced that Robert Mathis would be suspended four the first four games of the season for violating the league's substance abuse policy. A report was found that Mathis was taking unapproved fertility drugs.

During the first week of training camp, running back Vick Ballard tore his ACL and will be out for the entire season

After trading their first round pick to Cleveland for Trent Richardson, the team didn't have their first selection until the second round. The Colts also had the fewest picks in the draft with five, so that had to be wise in their selections. They needed to address their position problems at wide receiver, safety, and defensive line.

After Reggie Wayne went down for the year with a knee injury, the team should they were really lacking in depth at wide receiver. Hilton's skill set is better suited as a slot receiver and the team needs a talented receiver to play opposite Wayne.

With Antoine Bethea gone to free agency, the team needs a playmaker at safety. LaRon Landry was inconsistent for much of the year and could possibly lose his job to Mike Adams.

Looking at the defensive line, no one stands out. The team could use a defensive lineman who can be a block occupier to open up space for the linebackers to rush the passer.

With the 59th pick overall, the team selected Ohio State tackle Jack Mewhort in the second round. Mewhort has the size and strength to be a great pass blocker but needs to improve as a run blocker. Indianapolis also selected Ole Miss wide receiver Donte Moncrief in the third round. Moncrief was praised for his quick acceleration and great hands, but was criticized for not being a great route runner.

With Reggie Wayne, Dwayne Allen, and Ahmad Bradshaw back from injury, the offense will be back to form in 2014. Andrew Luck will continue to establish himself as an elite passer and the return of his target will reduce his turnovers. Ahmad Bradshaw will be the starter with Trent Richardson seeing mostly spot duty until he proves himself. Donte Moncrief has the potential to play opposite Reggie Wayne due to Hakeem Nicks' poor 2013 campaign. It will be hard for Jack Mewhort to beat out Anthony Castonzo or Gosder Cherilus for the starting tackle job.

The defensive will be improved with cornerback Greg Toler coming back to an already above average secondary. The rush defense however is still a concern. Bjoern Werner will have to step up during Robert Mathis' suspension to bring the same level of production as that of Erik Walden.

Overall the team will continue its march of progress across the AFC. It wild take at least two years for another AFC South team to challenge the Colts. Indianapolis will still be the favorites to win the division as long as Andrew Luck plays like he does.

How will the Colts fair this season? 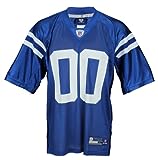