When most people think of road bikes, they probably share a common vision: a sleek, high tech bicycle that is light, sleek and fast. They'll probably also picture many gears. That's true for the most part: they are built for speed and agility. However, did you know that single speed road bikes are an increasingly popular offering in this category?

You may have caught wind of the fixed gear craze that's been going on for the last few years. Those bikes have advantages of their own, but they are not what I'll be focusing on here. (I've written another article on fixies you can check out in my profile). I want to talk about the endless fun a person can have on a good quality single speed road bicycle.

In this article I'll primarily be reviewing a few of my favorite models. We'll take a look at three in total, and I'll go over each ride and why you might consider it. I will focus specifically on one speed bicycles with a road geometry. However, I will also briefly interact with why you might consider a one speed, and what the advantages are for you and your exercise. Let's get started!

What's the difference between this and a fixie?

Why Pick A One Speed Road Bike?

There are lots of great reasons that a person might consider buying a single speed roadie, or adding one to their bike collection if they already have a bike. Here are a few off the top of my head.

A bike like this is generally a lot more affordable than a similar ride with gearing, simply because there is a saving in terms of parts. There is no groupset or derailleur to worry about, and there is less cabling to run along the frame. They're simpler to put together for the shop and manufacturer, and that saves money too. For that reason you can get a good bike for a fraction of the the cost of a full-featured alternative.

A nice thing about a road bicycle that's single speed is that it mixes up your riding style. If you're concerned with being in top shape, you should know that a person acclimatizes to whatever they ride. If you're riding with multiple speeds to choose from, you'll subconsciously start relying on whatever gearing range you use. A single speed helps avoid plateau by shaking you out of that routine.

It May Be All You Need:

You might be surprised by how little you need. Unless you live in an area with lots of hills, you may be quite fine riding or commuting on a single speed road bike. I did it for years! Analyze your routes and you might be shocked. A good way to test is to try making your commute on a single gearing and see how you do. 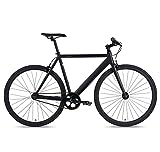 You may not have heard of 6KU. That's because they're not a big brand. Still, they've put together a pretty good little single speed road bike. To me, it's a great example of the simple aesthetic that single speed riding is all about.

The bike is built on an amazing frame. It's aluminum alloy, which is light to begin with, and remember that you'll save weight by ditching other components. It's also extremely durable. The fork is alloy as well.

The rims are really nice deep Vs, which are light and strong. A flip-flop hub is installed, allowing you to coast or ride with a fixed gear, depending on your preferences. Another unexpected feature of this ride are the double brakes. Extra stopping power is always nice when you need it.

It's a really simple bike, but it's a captivating ride and absolutely stunning to look at. For under $300 it's an absolute steal.

The Rapido is on my list, although with a caveat: I think the stickers are pretty ugly. That's just my opinion (I tend to gravitate towards unbranded looks), but fortunately you can remove all the decals on this bike for a very clean look!

It's also a bad photo: the paint is white, not off-grey.

The bike is great because it has a far more road friendly geometry than a lot of the 'urban style' fixies you'll find. That means you can pedal a bit faster and reach a higher top speed than you would be able to otherwise.

At just over 26 pounds it's not the lightest, but it's not unbearably heavy either. It's another high tension steel frame, but the tubing is oversized and it looks great in person. The rear hub is a flip flop style, meaning you can switch between a freewheel (for coasting), or try out fixed gear if you want to. The brakes and rims are unbranded, but they're decent. You could put a bit of your savings towards upgrading to a nicer set for both.

The pedals include cages, which is a nice thing for achieving a higher speed and improving your stroke. I should mention that the tires are 700c x 32, so they're a bit beefier and wider than you'd typically find. If speed is what you're after, change those to a smaller size. (But they're Kenda, so they're decent quality).

It's an inexpensive single speed road bike that hits all the marks and has pretty good customer reviews, check it out.

SE Lager: A good single speed bicycle to grow with

You might be more familiar with SE for their like of BMX bikes and accessories, but they've also ventured into the road bike field as well (to a limited degree). Their stuff isn't super high end, but what I like about it is the affordable price tag and durable bicycles they produce.

The frame and fork are both high tension steel, but they're light enough that you won't notice excess weight during daily use. There's very little badging on the bike and the rims are not deep V, so this bike has a very 'no-nonsense', stealth look to it.

Just about everything on the bike is SE's proprietary brand mark, right down to the saddle. It does come with a cartridge bottom bracket paired to a forged steel crankset, and the rims are double-walled aluminum alloy, so they are fairly light weight and quite strong.

The gearing ratio is 16t to 42t, which is a good all-around gearing for getting around town. This is probably the least road-like of any frame I've reviewed so far, and it's good for an urban setting.

Just about every brand out there has recognized the move towards single speed and they're taking advantage of it. You'll find them everywhere from a high-end Bianchi dealer to Walmart, and anywhere in between.

Please remember, these are affordable single speed road bike options: good, but not the best out there. If you want some higher end alternatives, please leave a comment and I'll be happy to point you in the right direction.

Don't forget to pick up a helmet.