A Different Kind of Entertainment

When you are on a combination of tight budget and physical limitations, you have limited options for recreation: you make do with what you can find, and revel in memories.

Today, August 6, 2012, we indulged in just such an outing. About an hour from where we live, and relatively near one of my daughters, there is a Bass Pro Shop store. Who knew window-shopping could be such fun?

One of Several Drive-Through Trees

Well, for one thing, variety. There is something here for literally everyone to see shop for and enjoy. Even my daughter and young granddaughters love this place, and they are don't even go hunting or fishing. They go camping sometimes.

The appeal is in the size of the place, the layout and the decor. You enter into a lobby, and then go into the store proper through a near-life-sized replica of one of California's huge Redwood Trees. It is made to look as if the tunnel through the tree was partially burned out, and then carved out. If you have been up the Redwood Highway in our Golden State, you may have driven through one of the the many trees that inspired the replica.

Given that they have so many locations, and Redwood Trees are exclusive to California, I suspect that each store's entry probably represents something local to the respective areas.

Literally Something For Everyone

Once inside the store, your senses will be momentarily overwhelmed trying to decide which way to go first. This is a very large store with two floors. There are more tree replicas, and nearly every display shelf has some sort of nature diorama with assorted animals.

There are animals everywhere you look. As all of it is taxidermy, I was not so impressed with that aspect. (Animal lover that I am, I prefer to hunt with my camera, and don't like to see animals hunted for recreational purposes. But that's a whole other article.) Nonetheless, the displays were well-done natural-looking settings with rock outcroppings, vegetation and water.

Yes, water. At the rear of the first floor, you come to a pond/creek display with a bridge, and "anglers" in their waders, and fishing. Across the bridge, there is a huge fish tank housing several varieties of fish including Striped Bass and Sturgeon. The front viewing window of the tank is concave to help withstand the pressure of the thousands of gallons of water it must hold. The thing is huge. As you stand on the floor, you are looking up to about a height of 10 feet to the upper edge of the tank, and it is at least 15 feet wide! A waterfall pours into the top of the tank.

To the right is a flight of stairs taking you up past the top of the tank, from which vantage point you can see the glass is four inches thick! On the landing, you are between two sections of the waterfall; still looking up to the very "headwaters," and down into the tank.

The stairs continue and curve around to the left, taking you into a rock grotto behind the waterfall. As you emerge, you find yourself on the second floor near the camping equipment section. Gosh--and you didn't even notice you were climbing stairs!

If the stairs are too much for you, though, there are a pair of glass-walled elevators to whisk you up topside. (You can just see the edge of them to the right of the pond with the "anglers," top photo in this section.)

An Outdoorsman's (or Woman's) Department Store

There are departments dedicated to just about every outdoor activity you can think of, and each department is the size of an entire smaller store in itself.

If it's fishing boats you want, yep, they have them, and a decent-sized selection at that. You can choose from Jon Boats, Go-Fast Bass Boats, or Pontoon-Platform "party barges."

There are also ATV's, canoes, kayaks and fishing floats. I'd never seen fishing floats before. I don't mean the kind you attach to your fishing line so you can see it (apparently, those are called "bobbers,"), but these are like chairs made of netting, and fastened between inflatable pontoons or arms of the chair. You sit in comfort in the middle of a river, and don't have to worry about being knocked off your feet by currents or slippery rocks. What will they think of next?

Here's a list of as many of the departments as I can remember:

What Is That Delicious Smell?

Ah, yes! The aroma. A large section of the store is permeated by the aroma of good things to eat, for in the front corner is a small, old-fashioned confectionery shop, making fresh fudge on-site as well as kettle corn.

They also stock a selection of old-fashioned candies, both hard and soft, as well as some of the stuff that appeals to the youth of today, such as "gummy worms" and sours. For the adult palate, there is a wide variety of cooking spices and barbecue sauces. You can choose Jalapeno Ketchup, or a hot sauce bearing the label "100% Pain." Wow--sounds like you might need a fire extinguisher handy with that one! 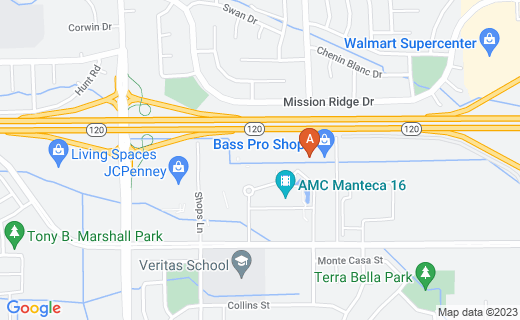 There are a great many branches of this store, mostly in the Eastern United States and the "Deep South" States as well as in Arizona. There are only two in California--the one we visited in Manteca, and another in southern CA, in Rancho Cucamonga. They also have a branch in Calgary, Alberta, Canada.

This particular store is located at 1356 Bass Pro Drive in Manteca, CA. It's inside a large shopping center accessed via South Union Street at the corner of Atherton Road. State route 120 is the nearest freeway, but it's not terribly far from Interstate Highway 5, either.

The store's website gives a history of their origins. They started out in 1971 when young man became frustrated with a lack of selection in good fishing tackle near where he lived. So, he got a trailer and set out to load it up with the best stuff he could find from all over. The rest, as they say....

Have You Ever Been to a Bass Pro Shops Store?