With the 2010-2011 NBA season ready to get underway, it is about that time to get prepared for perhaps one of the most anticipated seasons in NBA history. One of the most common ways in which basketball lovers show their fandom and support for their favorite NBA basketball team(s) and player(s) is to dawn one of their jerseys. Whether it be an NBA rookie like John Wall, a perennial fan-favorite like Kobe Bryant or Dwayne Wade, an NBA superstar who changes teams or jersey numbers like LeBron James and Amare Stoudemire, or an NBA team changes their jersey design, the new-look and fan favorite player jerseys are often times the most desired by fans. With so many great story lines for the coming NBA season, along with an abundance of young talent to follow, this is bound to be a season to bring out the passion and fandom in all NBA fans. This article will break down some of the most popular players and jerseys in the NBA for this coming season.

What’s not to like about owning a Kobe Bryant Jersey? Kobe is the most popular basketball player in the world and plays on the most popular team, the Los Angeles Lakers. As such, Kobe’s jersey has maintained its status as the NBA’s most popular jersey since he switched from the #8 jersey to the #24 during the 2007-2008 season. The fact that Kobe and the Los Angeles Lakers have reached the NBA Finals in each season since then has only helped his international acclaim; not to mention the fact that he helped lead the United States “redeem team” to the Gold Medal in the 2008 Olympics on perhaps the world’s grandest basketball stage of them all. Kobe Bryant is a 5-time NBA Champion and the youngest player in NBA history to score 25,000 career points. As each season passes, Kobe continues to build on his stellar legacy and is climbing his way up the NBA’s all-time ranks in terms of the greatest players to ever play the game.

“The King” LeBron James has taken some flack over the NBA offseason from his decision to join up with the Miami Heat, but make no mistake about it, LeBron James is one of the most popular amongst basketball fans in the world. The changes from the Cavaliers to the Heat and jersey #23 to #6 are all the more reason to believe the LeBron James jersey will be perhaps replace Kobe Bryant’s as the most popular in the NBA for the 2010-2011 NBA season. After all, everyone likes a new look to their favorite player’s jersey, unless of course your favorite team is the one which the player leaves—in this case the Cavs. LeBron James, the 2-time reigning NBA MVP and arguably the most freakish athlete the NBA has ever seen, will continue to be a focal point of the NBA for many seasons ahead now that he has joined forces with other elite players Dwayne Wade and Chris Bosh with the Heat, who are bound to gain even more notoriety and are likely to win a championship(s) as long as the Miami Heat super-team is in tact.

At the age of only 22, Kevin Durant has emerged as super-elite player in the NBA and worldwide circles. Durant became the youngest player to ever win the NBA’s scoring title last season at 30.1 points per game. He followed that up by putting the United States National Team on his back and leading them to the Gold Medal in the World Championships over the Summer with a very impressive showing throughout the tournament. Don’t let the small market of Oklahoma City fool you, Durant has already established himself as one of the most popular players. The Kevin Durant jersey is one of the best selling jerseys in the NBA and his stardom will only continue to rise as he carries his young Oklahoma City Thunder quickly up the NBA ranks. In a recent poll of NBA General Managers, Durant was voted by 56% as the player that GMs would most want to start a franchise with today and won 67% of the votes projecting him to win the league’s MVP in 2010-2011. The sky is the limit for this young NBA phenom in terms of his skills, accomplishments, and popularity.

Arguably the best center in the NBA, Dwight Howard a.k.a. Superman is a freak of nature with his size, strength, and athleticism. Such attributes have propelled Howard to win two consecutive NBA Defensive Player of the Year Awards, as he has led the NBA in rebounding and blocked shots in each of the last two seasons. Howard’s charisma and ability on the basketball court helped the Dwight Howard jersey rank as the fifth most popular last season according to the NBA Store.

Entering his 3rd NBA season, point guard Derrick Rose is not only one of the NBA’s brightest young stars but also one of its most popular as well. Derrick Rose is a former #1 overall draft pick and rookie of the year for 2008-2009. And the fans took notice, as the Derrick Rose jersey ranked as the 4th most popular jersey last season according to the NBA Store. His popularity is sure to grow even more, as the Bulls are set to have a strong team for years to come. Rose’s flash, flair, speed, and penetration ability entertain fans and leave opposing defenses looking for answers. 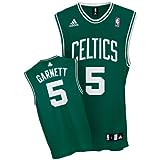 Entering his 15th NBA season, KG has been one of the most popular players in the NBA since he entered the NBA out of high school. Although he was not the first player to enter the NBA out of high school, he was the first one to do it in over a decade, which set off a trend that many soon followed. Even in the latter years of his career, KG is still one of the league’s most popular players. The Kevin Garnett jersey was the 3rd most popular last season according to the NBA Store. Furthermore, Garnett has been voted by the fans as an all-star starter 13 consecutive years, which is a testament to his ever-lasting popularity. It doesn’t hurt that Garnett plays for one of the top two most popular teams and most successful NBA franchise of all-time, the Boston Celtics. He was a fan favorite in his days with the Minnesota Timberwolves as well. Besides, what’s not to like about a player with a deep passion for the game and a versatile skill set like that of KG. 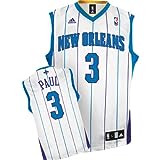 Chris Paul, or CP3 as fans like to call him, is arguably the best point guard in the NBA along with Utah’s Deron Williams. Not only is CP3 an elite player who makes the game of basketball look easy, but is also well-known for his activism in the Hurricane Katrina relief efforts in the city of New Orleans and with other various charitable ventures. 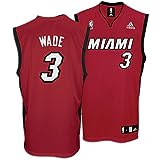 Dwayne Wade a.k.a. “flash” has been regarded as one of the elite players in the NBA since he put the Miami Heat on his back and carried them to the NBA title in the 2005-2006 in just his 3rd NBA season. Since then, Wade has continued to perform as one of the NBA’s best year after year and perhaps had the best performance on the “Redeem team” throughout the United States’ Gold Medal run in the 2008 Olympics. He has also gained notoriety for appearing in various television commercials. This season, Wade has been joined on the Miami Heat by LeBron James and Chris Bosh to form what many are calling a “super-team”. There is no doubt the Heat gained the attention of NBA fans and will be the team everyone is interested in for the next few seasons, whether it be to see them win or lose. 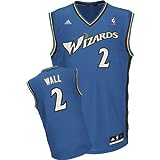 Often times sports fans are looking for the next big thing—and John Wall is that in the NBA basketball world. Although Wall is just entering his rookie season as the #1 overall pick in this past Summer’s draft, there has been hype about this kid since he was playing in high school. His ball skills and lightning quick speed are bound to make him one of the most popular NBA players in no time. In many ways, Wall’s talents resemble that Chicago’s Derrick Rose, except Wall is better at collecting steals and blocked shots. The sky is really the limit for this young potential NBA phenom. 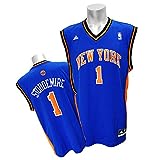 Amare Stoudemire has been one of the most popular players in the NBA since his first season in 2002-2003 due in large part to his explosiveness for his size at 6’10”. He is a 5-time NBA all-star, who has been voted by the fans as an all-star starter multiple times. This season, Stoudemire moves from the land of the rising sun in Phoenix to the big apple and epicenter of basketball in New York. As a New York Knick, Amare will carry a huge load in terms numbers and live up to his nickname of “stat”.  As a result, the Amare Stoudemire jersey will almost assuredly be one of the NBA’s most popular now that he has a fresh start and will showcase his game in the mega-market of New York and the mecca of basketball, the Madison Square Garden.

Along with John Wall, Blake Griffin is the next big thing in the NBA. Basketball fans were disappointed to see Griffin miss all of what was supposed to be his rookie season in ’09-10, but Griffin is poised to come back stronger than ever in what will still technically be his rookie season. Simply put, Blake Griffin is a beast. Griffin is an outstanding athlete and player who plays the game with passion and determination. Such attributes propelled Griffin to College Basketball’s National Player of the Year while averaging 22.7 points, 14.4 rebounds, and over 1 block and steal per game in his Sophomore season at Oklahoma. Although the Clippers have traditionally been overshadowed by the Lakers in Los Angeles, Blake Griffin will draw a lot of attention back to the Clippers in the coming years. This guy is going to be dynamite and the Blake Griffin jersey is one that is bound to be among the NBA’s most popular for years to come.