It takes great deal of stamina and dedication to run long distances, to push your legs forward even as they scream for you to stop. Though you have trained your body to endure the sweet pain of long-distance running, are your shoes able to handle just as much? Replacing footwear that wears out after a mile-long run can be an expensive affair, and really, who wants to pay so much to do something one enjoys?

There are a couple of factors one should keep in mind when out shopping for a pair of running shoes, namely:

Pronation in any way is not an important factor to consider. Here, pronation means the degree of one's foot rolling inward. The types of pronation include:

To try to correct the pronation of one's feet with what one would deem as the appropriate footwear may actually lead to higher chances of injuring more than your feet, as this article suggests. Here, the writer stated that one of the more common reasons a runner deviates from normal pronation is due to excessive stress on lower leg muscles from overworking them. Therefore, it is important to note that over- or underpronation is merely a superficial symptom of the actual problem and may not be cured simply by changing what one wears.

Saucony's Progrid Guide 5 running shoes are light and comfortable to wear, even more so with its 8mm heel-to-toe drop, which allows for more midfoot strikes than heel strikes, consequently putting less stress on the knees as you run.

The shoes' ability to absorb shock can be attributed to the ProGrid cushioning system which covers the full length of your feet. They are also tailored with Saucony's Arch-Lock technology, the purpose of which is to keep the arches of your feet in place, allowing enhanced movement from the heel to your toe.

You also need not worry about overheating your feet while running, which can cause blisters from the sweat, as the ProGrid Guide 5 has a mesh made of a material that keeps your feet at room temperature.

With EVA and IMEVA foams in the midsole and a padded foam sockliner, Reebok's Pheehan running shoes are comfortable and light to wear, capable of cushioning the impact on your feet as much as possible from hitting the ground with every step, resulting in less stress on your joints. It should be noted though, that repeated use may eventually break down EVA foams.

The shoes also come in a breathable all-over mesh that lets air in, such that your feet won't feel overheated or sweat as much to the point that your shoes stink of it. One downside to wearing them, though, is that their insoles are not removable, which may be inconvenient to those who wish to replace them with their preferred orthotics.

Though the GEL-1170 pair from ASICS can be a bit heavy to wear for some, one can still comfortably wear it due to the gel support in its heel, which absorbs the shock received by one's heel upon landing. ASICS' Propulsion Trusstic Technology is adapted in this pair, a plastic shank which, as its name suggests, helps propel the wearer forward with each step while running. The shoe's mesh also offers a lot of breathability, making the GEL-1170 a pair that lets you run for miles without feeling much discomfort.

An issue that I see may pose a problem is that the gel support found in the heel is absent in the front, and the discrepancy may throw some runners off. 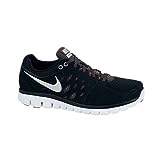 Nike's Flex Run 2013 features full-length flex grooves that allow flexibility and comfort in motion of the forefoot as well as rubber segments fitted in places across the sole that wear out easily.

Considering how light they are, the comfort of wearing these running shoes can be enjoyed in either a good run or long walks involved in touring a foreign city, for instance. The shoes are doubly comfortable to wear with the molded EVA sock liners they come in. You can also expect to find a lot of space in the toe box.

One of these shoes' most defining features is the GO impulse traction sensors, which help maintain the runner's posture and enhance the responsiveness of his or her feet to any changes in the terrain.

The shoes have a lot of other features going for it: a durable Resalyte midsole for cushioning, Agion scent protection to treat odor, a 4 mm heel-to-toe drop which enables more midfoot strikes while running. Another trait the shoes have to offer to encourage more midfoot strikes is the number of overlays and a tight mesh keeping your feet in place, which affects somewhat the shoes' breathability.

No two pairs of feet are the same, both physically and in preferences. Hence, one experiences wearing a certain pair of shoes differently from other wearers.

If you're looking to run as a more efficient midfoot striker, the Skecher GoRun Ride 2 may be appropriate for you. If you're looking for extra propulsion, the ASICS GEL-1170 should do quite nicely on your feet. These shoes have been tailored to meet the needs of a wide variety of runners. Just to further stress on the point, the right pair for you is one which feels like an extension of yourself.